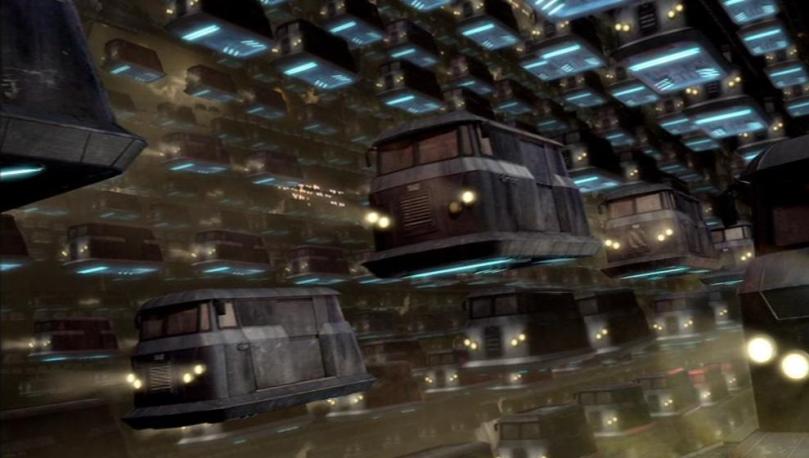 Atlanta traffic might be bad, but at least we don’t have killer crabs.

A newscaster delivers a traffic report as an elderly couple in a stalled car wait for the police. They are under attack from an unknown creature, and the creature wins before they can be rescued.

On the TARDIS, the Doctor offers Martha a trip into the future. She wants to visit his home planet, but the Doctor deflects her attention with musings about the architecture and the orange skies of Gallifrey. The way he looks… it’s heartbreaking. He sets a course for New Earth, the same place he took Rose on their first adventure together. The Doctor is excited, but Martha considers it a rebound relationship.

As they arrive, the Face of Boe directs his attendant, Novice Hame, to find the Doctor before it’s too late. Meanwhile, Martha encounters the New Earth version of a drug bazaar. The Doctor watches a young woman buy a dose of Forget after losing her parents on the motorway, and the transaction provides a distraction for a couple to kidnap Martha and drug her with a Sleep patch. With enough people on board, the car now qualifies for the express lane.

The Doctor pursues on advice from the pharmacists – he threatens that he will personally close the street down that night – and Martha meets her abductors. They are Milo and Cheen, and Cheen is pregnant so they’re looking for a better place to live. The upside is that they’re only ten miles away, but the downside is that it will take six years to travel the distance.

The title of the episode is Gridlock for a reason.

The Doctor enters the motorway and, after choking on exhaust, meets a cat person named Thomas Kincaide Brannigan and his human wife Valerie. They also have a litter of kitten kids, colloquially known as Children of the Motorway. The Doctor is astounded by the pace of the motorway, but he has no way off his current car. Brannigan refuses to move to the fast lane due to safety concerns for his kids, but he does connect the Doctor to a radio-based network of drivers who help him track down Martha’s location. Some of the drivers on the motorway have been there for over twenty years.

The Doctor questions if the police even exist in this endless traffic jam. Meanwhile, Martha learns that there are creatures living in the smoke layers beneath them, possibly in the air vents. As they all sit in the eternal traffic, the radio broadcasts a devotional that buoys the spirits of the commuters. Milo and Cheen’s car is finally granted access to the fast lane, but the exits are all closed. In fact, they’re perpetually closed, and the creatures are on the attack as the cars keep making the loop.

The Doctor uses his sonic screwdriver to jump from car to car, descending on foot. He leaves his coat – it was given to him by Janis Joplin – and muses about how he lied to Martha while he was showboating, then poses as a traffic patrolman as he bounces down the levels and encounters a host of characters.

The Doctor reaches the last level before the fast lane. He clears the smoke for a moment to get a clear view of the monsters below. They are the Macra, and they’re attacking cars in the fast lane. Martha’s car uses a submarine trick and cuts power to rest on the floor of the motorway. Unfortunately, they only have eight minutes.

The Doctor explains that the Macra feed on toxic gas, once building an empire of slaves (in the Second Doctor’s era) to mine gas for them. These Macra are no longer intelligent, but instead non-sentient hungry beasts. His attempts to stop the Macra is interrupted by Novice Hame, who explains that she’s dedicated her life to redemption for her past crimes over the last twenty-four years after she teleports them away. The world died in seven minutes after a drug named Bliss evolved into a lethal virus. Novice Hame has spent the ensuing years taking care of the Face of Boe while New Earth labors under a self-imposed century-long quarantine. The citizens in the motorway were saved from the virus, but are enslaved in their salvation.

The Face of Boe implores the Doctor to save the human race.

Martha and her abductors talk about the Doctor as their air supply dwindles. She places all of her faith in him, and its enough to sway her captors to power back up and drive through the Macra. The Doctor detects their license signature and, with a burst of life energy from the Face of Boe, opens the entire motorway to the world above. Martha’s faith is redeemed as her car emerges into the light of the sun and sets a course for the Doctor and the senate building.

As Martha arrives, the Face of Boe’s containment tank shatters. Martha asks who Boe is, but the Doctor only knows of the legends. The legend also tells that Boe will share a final secret before death, and the last of one race shares fate-changing words with the last of another.

“Know this, Doctor: You are not alone.”

And then he dies.

Martha and the Doctor return to the TARDIS, strolling along the now-defunct Pharmacist’s Row. Martha demands that the Doctor explain the secrets of Gallifrey and his history, and as the city raises their voices in the song of the devotional, the Doctor finally tells her of his home and the Last Great Time War.

This story is fairly light on story, but it continues threads set down from the beginnings of the revival era. The character development between the Doctor and Martha is great stuff, especially as Martha settles into her role as companion and helps the Doctor heal.

The Christian themes in the story are strong, from the discussions of faith in the Doctor – a literal deus ex machina, remember – and the salvation found in heading toward the light to the use of two Christian hymns as diegetic music. The travelers on the motorway sing “The Old Rugged Cross,” a 1912 hymn written by American evangelist George Bennard, and the recently freed citizens of the New New York sing “Abide with Me,” an 1847 hymn written by Scottish Anglican Henry Francis Lyte.

Finally, we saw the return of a classic enemy, although in a much-reduced state. They are left to waste away in the bowels of the motorway, which is somewhat troubling, but certainly not as much as it would have been had they been fully sentient.