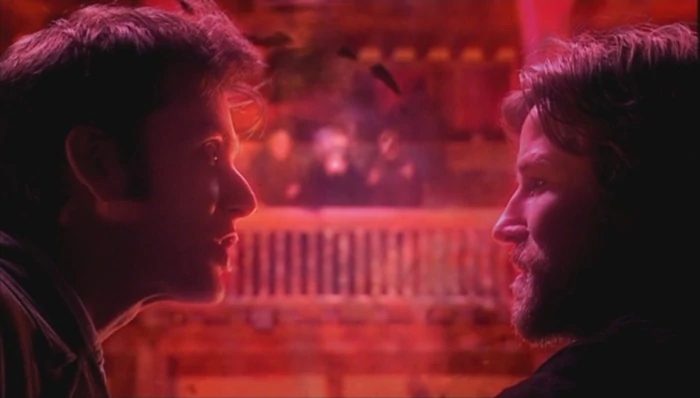 A woman named Lillith smiles as she is serenaded by a bard. She offers him a trip upstairs for his efforts where she reveals herself as a witch-like creature. She introduces the rest of her coven, Mothers Doomfinger and Bloodtide, and they consume the young man.

Going out on a limb, I’d say he’s not getting lucky tonight.

As the TARDIS hurtles through the void, Martha asks about how the time capsule works. The Doctor is elusive but is more than happy to introduce her to London 1599. She’s concerned about A Sound of Thunder, the Grandfather Paradox, and slavery, but the Time Lord eases her mind with the spectacle around them and urges her to “walk like she owns the place.” Oh, and they can also check out the freshly-built Globe Theater.

It’s more of tetradecagon instead of a globe, but they get to see William Shakespeare nonetheless. The Bard makes a curtain call after Love’s Labour’s Lost concludes, and the Doctor is bewildered by the man’s vocabulary and his odd behavior. It seems that Shakespeare is under Lillith’s spell and he has just announced a surprise play that the Doctor and Martha have never heard of.

They visit Shakespeare a bit later as he and his actors talk about the upcoming play. The playwright is unaffected by the psychic paper – he sees it as blank, which the Doctor heralds as the mark of a true genius – and looks through the ruse of Sir Doctor of TARDIS and Martha of Freedonia. He even tries to woo Martha, though she’s put off by his racial vernacular. After a brief confrontation with Lynley, the Master of Revels – the witches dispatch him after he threatens to shut down the new play – the trio get to know each other. Shakespeare can see a considerable amount about the travelers as they talk. Shortly thereafter, the Doctor and Martha retire to their guest quarters and chat about magic and witchcraft.

The Doctor also continues to mourn Rose, which puts Martha off a bit as he inadvertently compares the two companions.

Lillith visits Shakespeare and acts as his muse, playing the puppetmaster as he unwittingly writes. Lillith also kills Dolly Bailey, the owner of the house. The next morning, Shakespeare muses about the Globe Theater and how the architect, Peter Streete, often spoke of witches. They rush to the theater and investigate why it is built as a tetradecagal. They then head to Bethlehem Royal Hospital, where Streete was committed after he spoke of witchcraft.

The actors rehearse their lines and summon a spirit, but they agree not to speak of it for fear of being committed. Meanwhile, our travelers meet with Streete and find him catatonic, but the Doctor uses his telepathy to help the architect to unlock his memories.

They’re also upset to find that the hospital’s inhabitants are whipped to entertain the gentry.

Streete reveals that the witches dictated the design of the Globe Theater. When the design was complete, the witches broke him and he ended up in the hospital. The discussion is stopped when Mother Doomfinger arrives and kills Streete with a single touch. The Doctor challenges her, and after he deduces that the fourteen walls of the theater are based on the fourteen stars of the Rexel configuration, he names Doomfinger as a Carrionite. The witch disappears as the Doctor explains that their “magic” is really an ancient science based on the power of words.

Lillith promises to kill the Doctor. Because that’s what she does.

The Carrionites vanished at the dawn of the universe, in the Dark Times, leaving it up to debate whether or not they actually existed. The Doctor deduces that the new play was supplied by the Carrionites, and its recitation will bring about the end of the world as focused by the lens of the Globe Theater. The Bard heads for the theater to stop the play as the Doctor and Martha rush to stop the Carrionites.

Bloodtide and Doomfinger use their power to stop Shakespeare. Meanwhile, the Doctor explains that time travel’s cause-and-effect is kind of like Back to the Future. They enter the house and confront Lillith. The witch names Martha, knocking her out instead of killing her since she’s out of her proper time. She attempts to name the Doctor but doesn’t succeed. She also tries to use Rose’s name, but that only makes the Doctor fight harder to save humanity.

She explains that the Eternals eventually found the word to banish the Carrionites into darkness, but the three “witches” used the power of Shakespeare’s grief over his young son’s death to escape.

She tries seducing him and fails, so she steals a lock of hair to weave into a puppet (or rather, a DNA replication module). Lillith stabs the puppet and the Doctor collapses, relying on Martha to restart the heart that the witch attacked. Lillith flies away to the theater.

As the travelers rush to the theater, the actors speak the words that open a portal and release a violent storm of energy. Shakespeare joins the travelers and the Doctor encourages him to reverse the magic through his wordsmithing. The Bard stumbles over the last word and Martha supplies “expelliarmus” ala JK Rowling.

The Carrionites and all the copies of the play are sucked into oblivion, and with the portal closed, the assembled audience erupts in applause. The Doctor finds the Carrionite globe and the witches trapped within. As morning dawns, Shakespeare flirts once again with Martha as the Doctor plays with props, including a skull that reminds him of the Sycorax. He also fits the playwright with a neck brace that looks historically familiar.

As the Doctor and Martha bid the Bard farewell, he reveals that he knows about their true nature as travelers in time and space. The scene is broken up by the arrival of Queen Elizabeth I. The Doctor is ecstatic to finally meet her, but the queen demands that the Doctor be executed for reasons unknown.

The travelers run, chased by guards, and barely enter the TARDIS before an arrow slams into the door.

And off they go again.

This was another fun adventure that capitalized on Martha learning about the new universe around her. It was especially fun for the Doctor to hang a lampshade on that with his remark about having to break in new companions.

The references to the franchise were particularly deep. The Doctor’s mind-reading ability came back into play (The Girl in the Fireplace, Fear Her, and The Sensorites), and the arrow in the TARDIS called back to both An Unearthly Child and Silver Nemesis.

We also get a call-back to the Eternals, first introduced in Enlightenment, and the concept of witches is not a new one in this franchise.

Behind the scenes, we’ll continue to see the witches’ loft as Sarah Jane’s attic, a move that helped to pay for what became one of Doctor Who‘s most costly productions.

It’s hard to find complaints about this story. Even the blossoming relationship between the Doctor and Martha isn’t terribly oppressive. If I had one issue to highlight, the chroma keying process was a bit off in the opening scenes and in the shots as our heroes rush for the Globe Theater.

Otherwise, this was a fun adventure with roots deep in franchise history.

UP NEXT – Doctor Who: Gridlock

One thought on “Timestamp #185: The Shakespeare Code”