You know, I’m a fan of Twitter and its potential, but there is one thing I’m getting tired of seeing. 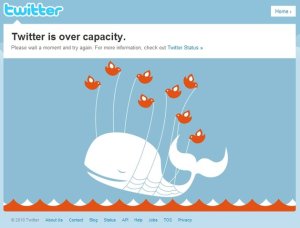 You’d think after all this time, they’d have things figured out, you know?  It’s becoming a little ridiculous.

An article entitled “Will People Ever Give Up Cable TV?” showed up on my iPod this morning from NPR.  Among the points in the article was this statement:  “Ever feel like you’re paying for channels you don’t use? I pay for dozens of cable channels I never watch.”

I can tell you that’s one of the reasons I gave up cable television.  I don’t watch 90% of the channels in the most basic lineup, and I can’t justify paying the prices for a small sliver of their offerings.  I’m a geek and I love my sci-fi movies and shows, but I can just as easily catch the episodes over the internet (Hulu and network sites), Netflix, or even by purchasing the box sets at a later date.

It’s nice to discuss the shows with friends as they happen in real time, but I find just as much satisfaction in reading the reviews, gauging the opinions, and diving in some time later.  The show or movie’s story doesn’t just die because it’s six or nine months later, and, in the end, the only person I need to worry about satisfying over the entertainment value is myself.

In the long run, if cable television services offered a cheap à la carte option for the channels I really want, I’d consider going back.  Until then, my money goes to other options and leaves the cable companies in the cold.

Provocative quote of the day, courtesy of Lieutenant Colonel Jay Stout, USMC, retired:
“My Air Force compadres, darn them, did such a great job of engaging the Iraqi fighters as they got airborne that I doubt an Iraqi aircraft got within 50 miles of a Marine Corps aircraft. So we had to satisfy ourselves with tearing up forces on the ground.”

I heard it on “Remembering The First Gulf War, 20 Years On” on NPR’s Talk of the Nation.  While it’s definitely Marine-speak, I wonder if certain people should never be allowed in front of a microphone in public forum.  Listening to it, I’m sure LtCol Stout meant it humorously, but the joke fell flat.  He tried a couple of other bits of military humor, but what some of my friends in uniform fail to realize is that civilians don’t understand it.  Unless you’ve experienced it, most military humor feels barbaric at worst.

In other news, my brain’s working overtime on another story idea. Yes, brain, I’m listening.

After purchasing the series a few years ago, I decided to start reading the Hannibal Lector novels by Thomas Harris.  I’ve seen Manhunter once, which was based off the first book Red Dragon.  I haven’t seen the remake yet, even though I own it.  I’ve seen the sequel Silence of the Lambs a few times, and Hannibal twice.  I don’t remember much from Manhunter since I saw it — how long is it now? — I’d say close to a decade ago, but I’m almost eager to watch it and Red Dragon just to compare some notes.

I just finished reading Red Dragon and started into Silence of the Lambs.  I am amazed at how addicitng the novel was.  I’ve actually lost sleep, and not from the dark subject matter, but because I really wanted to know what happened next.  Reading it also gave me several ideas on how to effectively make some of my characters significantly darker.  One of my weakenesses in writing is developing dark, troubled, or deliciously evil characters.  Dolarhyde was most certainly two of the three, and Lector picks up the slack by embodying the rest.  Graham was also a great template for a troubled and/or haunted protagonist.

What I really didn’t like was the way things wrapped up in the book.  It felt almost like the typical plot device for any slasher flick.  Read the book and you’ll see what I mean.  The other nit-picky thing is how Harris shifts from descriptions in the present tense to progressive action in the past tense.  Such as “Lector’s cell is blah-blah-blah” instead of “was“.  I’ve never read anything like that before, and as a result, it kind of pulls me out of the experience for a minute until I readjust.

I don’t recall if I have the book or film of Hannibal Rising around here.  I may have picked the DVD from a bargain bin once.

Quick update on my writing status:

I have a short story entitled “Meruva” that I submitted to a podcast author for an anthology.  As far as I know, the project is currently on hold.  I also have several articles in various states of completion for The ScapeCast.

Anyway, back to it.

I’m shifting over here from the old site at Blogger.  They’ve got some great functionality there, but it’s almost a little too complicated.  While I’m not giving up the dream of owning my own domain, I’m going to simplify a bit and hang out here.

Things are picking back up again with The Scapecast, but I still have yet to get back in the writing spirit for my other projects.  I’ll use this space to keep tabs on progress there as well.

Aside from all that, I’m just getting ready for Dragon*Con.