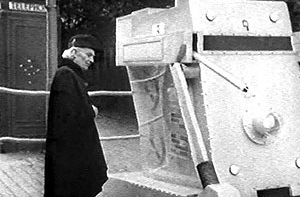 Between this and The Gunfighters, there have been some new style choices for the opening titles. It feels like the producers are trying to find a fresh voice for the show. What really felt fresh with this serial was the return to the 20th century. The “out of order” sign was a clever touch, but the TARDIS is looking rather shoddy.

The story is a standard tech-run-amuck tale, with a globally-networked central intelligence computer named WOTAN that knows a lot about everything. I don’t recall that they explained how WOTAN knew so much about things beyond the 1960s or the planet Earth, and that was a little disappointing because it didn’t make a lot of sense.

It also didn’t know everything, as it referred to the titular Time Lord as “Doctor Who” instead of as “The Doctor.”

WOTAN goes full Skynet, building machines to destroy the human race. This was a dark serial, with a ruthless intelligence that kills in a binary fashion. WOTAN is very “you’re either with me, or you’re my enemy,” and is very fast with getting the parts ordered, shipped, and assembled for the war machines.

Another nit to pick is how a machine prevents mechanical and chemical reactions from occurring in a firearm. There was no explanation, which makes this a convenient cheat and hurts the writing. This is exemplified by the order, “Tell the men to hold their fire,” followed by a threat to continue firing if the machine doesn’t stand down. Sir Charles seemed a bit daft as a result of this shoddy writing as there is no gunfire: The guns and grenades aren’t working, remember? Click, click, click does not equal bang, bang, bang.

That said, I did like the resolution to the story in turning one of the war machines against WOTAN. It was good that intellect and cunning won over brute force.

I like Ben and Polly, which are obviously another swing at adding a fresh face to the show. They work well together, and are much stronger in carrying the story than many of the previous companions. It was also a clever ruse by the Doctor to determine if Polly and Ben want to travel with him: Drop the key and wait for them to bring it to him. I can see how it may not have been a ruse by the Doctor, but he’s not usually so lax about his TARDIS keys.

Finally, I have to address Dodo. She was far more conservative in this adventure, and I did like having WOTAN turn her against the Doctor in an effort to assimilate him. But, her departure was quite disappointing. I really enjoyed her presence in the TARDIS, and she has been one of my favorite companions so far. She deserved far better than to be written off in a line of dialogue. That really soured an otherwise enjoyable episode, as there wasn’t even a chance to say goodbye for the Doctor or the viewer.

UP NEXT – Third Series Summary 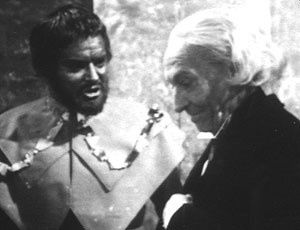 This serial kicks off with the Doctor pulling out his scientific tools again, and it’s good to see the him getting back to the exploits that we started Hartnell’s run with. What’s even more impressive is this story about class warfare and morality in the pursuit of utopia.

At first, I thought that the “savages” were supposed to be the cave-dwellers, but in truth the true savages are the technologically advanced upper class who power their entire lives with the life force of the lower class. It’s an allegory on progress, which depends on a certain amount of exploitation but requires a social conscience to prevent over-exploitation and unethical behavior. The story reminds me of countless Star Trek episodes, including the Next Generation pilot “Encounter at Farpoint“.

The cave dwellers and the light gun/mirror trick remind me Arthur C. Clarke’s Third Law: “Any sufficiently advanced technology is indistinguishable from magic.” It also plays into the continued deus ex machina of the Doctor and his travels.

Concerning both of those points, it was an great science fiction concept to place the Doctor in the vitality extractor. Would it extract only this incarnation’s life-force, or all twelve of his lives? It was also interesting that a life-energy transference would also bleed over some personality. The Doctor also never gets his energy back. Has this weakened him enough to prompt his regeneration in the near future?

Finally, Steven wasn’t my favorite companion, but this is a perfect ending for his voyage with the Doctor. His strong personality and morals will serve him well in negotiating a new civilization for both groups of savages.

UP NEXT – Doctor Who: The War Machines

“Oh my dear Dodo, my dear Dodo. You know, you’re fast becoming a prey to every cliché-ridden convention in the American West.”

With the closing line, this serial openly nods to the satire that it just completed. It opens just like a 1950s Western, and plays off quite a few of the Western genre tropes, including using guns with unlimited ammunition (until the plot requires an empty revolver). Our heroes, two of which pull a complete Marty McFly with the costumes, are totally inept with guns. The Doctor, who fits right in with his normal costume, keeps getting handed guns in spite of his intense dislike of them.

“Doctor who?” Quite right. I loved the opening episode’s title, “A Holiday for the Doctor”, for its play on words around the mistaken identity that drove the plot.

On the downside, the serial’s special ballad was vastly overplayed. Even though it was supposed to compliment the narrative, it was annoying after the first half of the first episode.

Regardless, the parody was fun, and I feel that the intense dislike that this serial garners in fandom is a bit much. Episodes like this are nice breaks, but I don’t want them all the time.

UP NEXT – Doctor Who: The Savages

As I watched The Celestial Toymaker, I realized that this serial was probably better when it was originally aired. It seems to depend on visuals to carry the narrative as the companions work through puzzle after puzzle to escape from the Toymaker’s trap, and I tried to consider that as I watched the reconstructions.

The trap is pretty simple, as it is a series of challenges that test the heroes in wit and intelligence. If they win, they can leave, but if they lose, they stay with the Toymaker forever. In the end, even if the Toymaker didn’t cheat at every turn, he would have won if not for the Doctor’s cunning, and that leads me to an overarching question: “Why bother?”

In reality, this serial had no point except to show the sadism of the Toymaker, and that could have been condensed into two episodes at most. Sadly, this odd little story was rather tedious and boring.

This marks another serial that is less powerful due to the lack of the Doctor, who is conveniently struck both incorporeal and struck mute in an effort to send William Hartnell on vacation. Unfortunately, this leaves Steven and Dodo to carry the serial. Fortunately, Steven isn’t as annoying in this one, and Dodo is still adorable. These two just aren’t enough to propel a story, particularly when it isn’t especially strong to begin with.

Of note, it was fascinating to place this serial in its time with the racial slur buried in the “Eeny, meeny, miny, moe” nursery rhyme.

I tried to remain positive about this tale, but in the end, I’d rather never see it again.

UP NEXT – Doctor Who: The Gunfighters

Bond can be black. The Doctor can be a woman. Spider-Man can be Hispanic. White guys have seen enough of themselves, dontcha think?

WordPress.com built a report about Creative Criticality for 2014. It provides some interesting stats about various posts and such, but also emphasizes the point that I should be more involved in 2015.

A San Francisco cable car holds 60 people. This blog was viewed about 600 times in 2014. If it were a cable car, it would take about 10 trips to carry that many people.

Pythagoras was our co-pilot for part of the day. Some people say that they'll never use geometry and algebra outside of school, but we two math nerds were crunching numbers over a miter saw to build four of these.
I got a few morning snuggles from @the.char.char.binks before getting back to work.
The clover is going bananas.