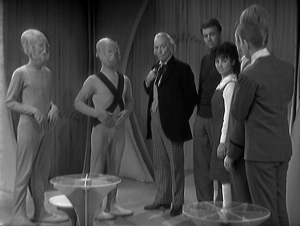 This story is essentially a parable about fear, from humans losing complete control of their autonomy to the Sensorites being afraid of confrontation and the dark. The serial is driven by the Sensorites and their fear of losing their molybdenum (“moly-mol-minerals”; poor William Hartnell) resources through betrayal of their trust in human explorers.

There were some great character building blocks. Susan is developing telepathy, and I wonder if it’s something in the Time Lord DNA. If so, does the Doctor share that skill? I also really enjoyed seeing Susan spread her wings a bit in facing off with her grandfather and demanding some space to run. She’s growing up physically, and yearns to grow emotionally.

I liked that they established the Doctor’s apprehension with weapons. I also enjoyed seeing the origins of the Tenth Doctor’s description of Gallifrey, even though it isn’t called that yet.

Despite those positives, this serial really drags on, and the unfortunate thing about watching something that doesn’t entertain is that you start to really pay attention to all of the flaws. First is that this serial is almost like a blooper reel for the entire first series. There are so many production errors, and they’re very noticeable. The guest stars can’t help distract from the verbal stumbles from Hartnell and Carol Ann Ford because the guests were terrible and single-note.

The second major flaw is costuming. The alien costumes are terrible, even for the 1960s, but they do remind me of the Ood (from the Ninth, Tenth, and Eleventh Doctor eras) with the overall design, transmitters, and telepathy.

Third, I really had an issue with Susan and Ian making fun of the Sensorite “flip-flop” walking style. It flies in the face of the overall mythology I’ve come to expect from the later years, and seems uncharacteristic of characters who were earlier celebrating how much they’ve grown as people.

The writing problems didn’t stop there. I got hung-up with the way that Susan shows momentary interest in the spectrograph, and then rudely interrupts Ian as he’s explaining it. I also had a problem with the Sensorites not being able to tell one another apart by anything more than their rank insignia, but they have no problem making direct telepathic calls to one another or reading text on paper. The removal of the TARDIS lock to prevent the Doctor’s company from leaving also felt weak.

The “creature” in the aqueduct is never really explained. I can infer that the growling was man-made, and that the claw marks in the Doctor’s coat were from the spears, but it would have been nice to have it acknowledged.

I know that I’m beating up on this serial. There are a lot of great ideas and concepts here, but they’re lost in long, drawn-out delivery. It’s not terrible overall, but merely boring and exaggerated with a ton of squandered potential.

It didn’t help any that the Doctor’s anger at the end toward Ian is quite unexpected and makes no sense. Everyone agreed at the start that the voyage has been good for our heroes, but Ian is frustrated in not being able to steer their own course. I wonder if the Doctor is projecting his frustration with Susan’s growth onto Ian.

I certainly hope that The Reign of Terror rings out the first year of Doctor Who on a high note.

UP NEXT – Doctor Who: The Reign of Terror

10 thoughts on “Timestamp #7: The Sensorites”