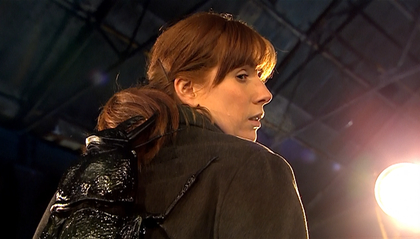 What could have been if not for a Noble companion?

The Doctor and Donna have stopped in a bustling marketplace on an alien world. While mixing it up with the locals, Donna wanders away to explore and finds herself in the company of a local fortuneteller. Offered a free reading since she’s a redhead, Donna takes a seat. The fortuneteller talks to her about the Doctor and Donna recounts her first meeting with the Time Lord.

While a mysterious scurrying occurs behind her, she flashes back to her time as a temp with H.C. Clements and the offer she turned down businessman Jival Chowdry. The moment of decision for her entire future was sitting at an intersection with her mother. She turned left…

…but what if she had turned right?

A large insect latches on to her back and the fortuneteller convinces her to turn right. She does.

The next time we see Donna Noble, she’s at a Christmas party celebrating her recent promotion with a round of drinks for her friends. One of her friends, Alice, almost sees the creature on her back, but they’re interrupted by the arrival of the Racnoss Webstar. The invading spacecraft is destroyed by UNIT and the Racnoss queen was killed, but the Doctor drowned in the assault. He was unable to regenerate.

Donna walks away by is soon met by none other than Rose Tyler. She came so far but was too late to meet with the Doctor, but she spots the insect on Donna’s back before vanishing into thin air.

Due to the closure of the Thames, Chowdry’s company has been losing money and Donna has been fired. Simultaneously, the Royal Hope Hospital has vanished into the sky. When it returns, there is only one survivor: Medical student Oliver Morgenstern. He was saved by Martha Jones, but she died as a result. Sarah Jane Smith and the Bannerman Road Gang were there as well, but they died while trying to stop the incursion. Wilfred is convinced that aliens are to blame, but Donna wants to hear none of it.

Donna takes a walk and finds Rose again as she emerges from loud flashes of light. The insect comes up again before Rose asks her about Christmas plans. She suggests that Donna and her family take a holiday, using the winnings from a future raffle ticket to afford it. Donna warns her to stay away and Rose vanishes again.

Sure enough, next Christmas, Donna’s family travel to the countryside. On Christmas Day, they watch as the Titanic smashes into Buckingham Palace. As a mushroom cloud rises over London – and Donna nearly spots the insect in a mirror – the terror and shock set in as they realize that everyone they know is dead.

Now refugees, her family is forced to relocate to Leeds to escape the radiation. Meanwhile, France has closed its borders to refugees, but the Nobles are allocated a house with two other families. The United States offers monetary assistance, but they are forced to withdraw their support when sixty million Americans are killed and converted to Adipose. Every major world city is affected as well.

The Nobles bond with their housemates, but they’re interrupted by soldiers firing at cars. The Sontarans have activated the ATMOS system and covered the planet in a poisonous fog. One of the soldiers spots the insect and takes aim at Donna, but he can’t find it later. Donna follows the flashing lights to find Rose in a nearby alley.

The two companions sit on a bench and talk about the crisis. The sky lights up as the gas burns away, courtesy of Torchwood Three. Gwen and Ianto died in the attempt, and Jack was taken to the Sontaran homeworld. Rose talks about the Doctor, how he saved the world from all of these events, and how Donna traveled with him in another reality. Had she been there to save him from himself under the Thames, the world would be in a better place. Rose has come to warn the Doctor of a darkness that threatens both of their universes, calling Donna the most important woman in the whole of creation.

Rose asks her to come along, finally settling on a time three weeks from now. She vanishes with an ominous prophecy: Donna Noble will die.

The Nobles bid farewell to their Italian housemates, courtesy of a new law that evicts all immigrants from England. They’re going to labor camps, which Wilf recognizes as the first step to fascism that he fought against before. Later that night, Wilf and Donna relax by the fire as he looks through his telescope. While trying to find Orion, the stars vanish from the night sky. Donna finds Rose and tells her that she is ready.

They hitch a ride with UNIT to a warehouse filled with computers, mirrors, and the TARDIS. The police box was salvaged from the Thames wreckage, and when Donna goes in, she finds it cold and dark even though she’s amazed. The ship is dying but still trying to muster the energy to help.

Using that energy, Rose is able to show Donna the insect with a circle of mirrors. The beetle feeds off time, specifically from decisions not made. By turning right instead of left, Donna has given the beetle a temporal smorgasbord. Rose recognizes that both the Doctor and Donna are necessary to stop the stars from going out. Scared out her mind, Donna asks what she can do to help.

Rose tells her that Donna needs to travel through time.

After a quick briefing, Donna steps back into the mirror circle – which is actually a homemade time machine – with the intent of changing her car’s direction. The machine is activated, but Donna has the revelation that she still has to die to save the world.

She materializes on a sidewalk in Sutton Court, half a mile and three minutes from her destiny. She starts running but soon realizes that she won’t make it in time. With the revelation echoing in her mind, she understands what she has to do.

She steps out in front of a truck, sacrificing her life to cause a traffic jam. As Donna dies, Rose whispers two words in her ear as a message for the Doctor, and Donna Noble turns left.

The insect falls off as the reset button is pushed. The Doctor comes in as the fortuneteller runs off, and Donna wraps him in a hug. They examine the insect as they talk about Donna’s adventure and her knack for finding parallel worlds. The Doctor wonders about the coincidences in their travels together, and when he calls her brilliant, Donna remembers Rose.

Except she never knew Rose’s name.

But she does know two words: Bad Wolf.

The Doctor rushes back to the TARDIS, seeing “Bad Wolf” everywhere. Inside, the console room is bathed in red light and the Cloister Bell is ringing.

The end of the universe is coming.

This “what if” story is a great dark tale that is really just a setup for the season finale. We get the greatest hits of the Tenth Doctor’s saves of Earth without seeing much of David Tennant at all. He was filming Midnight while Catherine Tate was engaged on this “Doctor-lite” adventure, one in a similar vein to Love & Monsters and Blink, but with a much darker direction.

It’s also a tease for the all-star cavalcade to come with nice touches for each mention: Martha’s theme and a pop of the Torchwood theme accompany their non-appearances, and the news report surrounding Sarah Jane’s heroic death mentions her employment with the Metropolitan, which is where she mentioned working to the Third Doctor in Planet of the Spiders. Rose obviously gets her theme throughout.

Catherine Tate sells this story, from Donna’s depression as the planet falls apart around her to her abject terror when she finally sees the time beetle on her back, which finally pays off the prophecy from The Fires of Pompeii. Her acting skill is just amazing and is showcased by not being overshadowed by or in competition with Tennant’s energy.