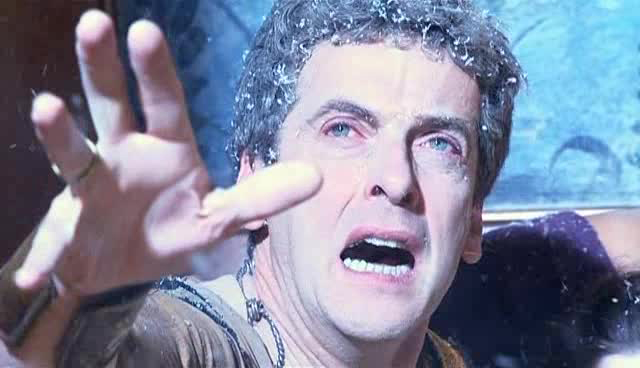 Just one act of kindness can make all the difference.

The TARDIS door opens on what the Doctor calls ancient Rome. Donna is enamored, particularly by the translation capabilities of the time capsule. She tries a bit of Latin, but it comes out as Celtic with a Welsh flair. He also mentions that he had nothing to do with a certain great fire in Rome, but we all know that to be a lie.

They round a corner, muse about the missing landmarks, and glance to the horizon as the ground starts to shake. There’s a volcano ahead of them. It is Mount Vesuvius, which means that they are in Pompeii, and it is eruption day.

While the travelers run for the TARDIS, a red-hooded woman reports back to her fellow sisters and the High Priestess of the Sibylline Sisterhood that the “blue box” has arrived as written in prophecy. Speaking of the TARDIS, it has been sold by a local shopkeeper to a marble merchant named Caecilius. The merchant considers the box to be a lovely piece of modern art, and his family is very superstitious. His daughter, for instance, is training to be a seer in the Sisterhood, and spots an irregular being in the vent leading the magma below.

Donna wants to save everyone in Pompeii, but the Doctor tells her that it is an impossibility. The event is a fixed point in time and cannot be altered. The Doctor and Donna find Caecilius and pose as both Spartacus and marble inspectors. Donna tries to tell them about the volcano, but the locals don’t even have a word for it.

Lucius Petrus Dextrus, the chief augur of the town, arrives and gives the Doctor praise during a verbal sparring match. Caecilius has developed a piece of art for the augur, which looks just like a circuit board, and Caecilius’s daughter Evelina arrives to shed light on the travelers. Both Evelina and Lucius see though the travelers, prophesy her return, and speak of Donna’s future.

Later on, Donna visits with Metella as she cares for Evelina. The girl is sickly and her arm is turning to stone. Meanwhile, the Doctor consults with Caecilius about the creature in the vent and how the vapors from the geothermal exhaust have enabled the soothsayers to predict the future with uncanny accuracy.

Lucius responds by sending the creature underground in pursuit of the time lord.

Donna continues her visit with Evelina, revealing the future of Vesuvius, which is transmitted to the Sisterhood as a new prophecy. The High Priestess declares that Donna must die for her foresight.

As the Doctor and Quintus return to Caecilius’s home, the creature erupts from the vent. The family treats the being like a god, but turn on it when it kills a man by dousing it with water. In the commotion, the Sisterhood kidnaps Donna.

He tracks Donna to the Temple of Sibyl and rescues her just before she’s murdered. He tells the Sisterhood about Sibyl, noting that she would be ashamed of them. The High Priestess demands to speak to the Doctor and reveals herself as nearly changed to stone. The Doctor recognizes that the people are being seeded by an alien species and demands that they reveal themselves. The being declares itself as a Pyrovile, a species that arrived a millennia ago and were awakened by the 62 earthquakes. The Pyroviles are a psychic race that can see through time. The Doctor holds the High Priestess back with a water gun as Donna opens the hypocaust and they escape into the volcano.

As they walk on, Donna asks about the fixed points. The Doctor replies that he can see them because that’s how he views the universe as a Time Lord. She’s still aghast that he will not save the people of Pompeii, but he cannot break a fixed point.

They reach the heart of Vesuvius, which is inhabited by the Pyrovile in their adult form. They spot the circuitry of an escape pod and recognize it as the same pattern that the augur has been coveting. Speaking of, Lucius reveals their presence. During the standoff, Lucius reveals that the Pyrovile homeworld is missing, and the creatures want to take Earth for their own. Donna and the Doctor dive into the pod and figure out that the Pyrovile are using the energy of Vesuvius to advance their plan. To save the world, the Doctor must allow Pompeii to be destroyed. It’s a question of 20,000 people versus the entirety of Earth, and Donna helps the Doctor choose.

They choose to save Earth.

Pompeii erupts around the pod, destroying the Pyrovile and ejecting the pod into Pompeii. The travelers rush to the TARDIS as the villagers panic and the Sisterhood is lost. Donna tries to help the people, but it is no use. With a heavy heart, she begs the Doctor to save Caecilius and his family, but he starts the TARDIS dematerialization sequence.

As they take off, she levels her fury at the Time Lord. Her frustration gives way to sorrow, and the Doctor tells her that he cannot save the people of Pompeii anymore than he can save his own people. Donna reasons that he can save just one family.

In a burst of light, the TARDIS rematerializes and the Doctor extends a hand of salvation.

They all watch from a nearby hilltop as the town is destroyed. Caecilius takes solace in the thought that Pompeii will be remembered, giving the name “volcano” to the carnage. Evelina has lost her power of sight, but the family is united in strength through sorrow.

Donna and the Doctor sneak away. She thanks him and he tells her that she was right: Sometimes he needs someone, and she’s welcome to be that companion.

Six months later in Rome, Caecilius’s family is happy and healthy. Quintus is studying to be a doctor, and before he leaves for the day, he gives thanks to the household gods. The relief reveals them to be the Doctor, Donna, and the TARDIS.

This story hits the mark on every level. The dialogue is quick and witty, but also serves to propel the plot forward instead of simply being clever. The setting is well crafted and makes Pompeii feel large even though it’s obviously the same street set redressed a few times over. Donna’s pleas and the Doctor’s internal battle tug at my emotions every time I see it.

The franchise mythology is on full display here, from the past (mentions of Gallifrey, identifying the Doctor as a Lord of Time, citing the Shadow Proclamation, nodding to the classic era while exploring the mysteries of the revival era’s Last Great Time War) to the future (the Doctor Who debuts of Peter Capaldi and Karen Gillan, laying some groundwork for the rest of this series as well as the future of the franchise, and beginning the lore of fixed points in time).

That “fixed point” business? It’s always been there, all the way back to The Aztecs when the First Doctor told Barbara that she could not change a single thing (“not one line”) in history without suffering dire consequences. The trick is making a difference in history without changing history. Thus, the blessing and curse of the Time Lord.

Some of the more obscure trivia about the episode includes the TARDIS as modern art, which is a nod to City of Death – one of writer James Moran’s favorite classic stories – when the Fourth Doctor parked the time machine in an art museum. The humor Mary Poppins gets a bit of screentime here with the “positions!” scramble to save breakables from the rumbling. We also get a nod back to Barcelona, which is where the Ninth and Tenth Doctors wanted to take Rose.

The Fires of Pompeii is a masterful episode of television.

UP NEXT – Doctor Who: Planet of the Ood