Doctor Who: The Husbands of River Song
(1 episode, Christmas Special, 2015) 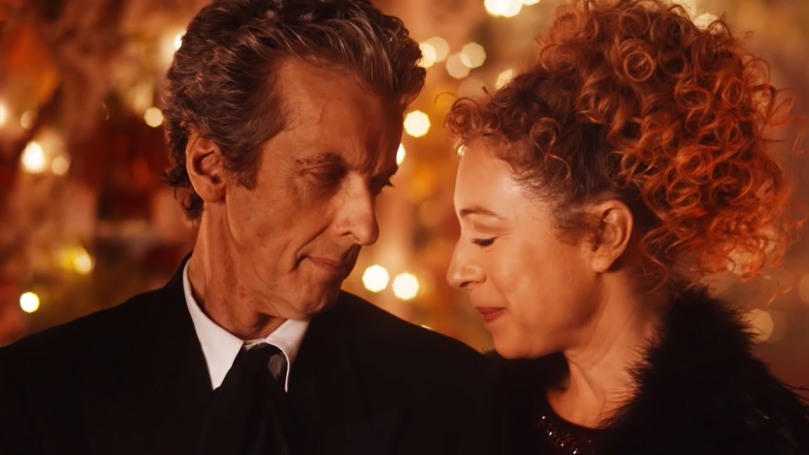 Christmas Day, 5343, on the human colony of Mendorax Dellora brings a man named Nardole to the TARDIS. He was sent there with a handwritten note but is rebuffed by the Doctor wearing costume antlers. Nardole explains that there is a medical emergency and the Doctor decides to tag along despite already having had a long day. As they pass the real physician, they find themselves at the door to a flying saucer and a woman in a hooded cloak.

Hello, sweetie. The Doctor easily recognizes River Song, but she has no idea who this face belongs to. Also, she’s married. And her husband is dying.

River’s husband is King Hydroflax, a man in a giant suit of armor being watched by guards genetically engineered to have anger problems armed with sentient laser swords and (remotely) by four billion subjects. Posing as the physician, the Doctor studies the king while refusing to bow – bad back and all – and finds that the ruler has something jammed in his head. River takes him aside for a brief consultation while Nardole tries to calm his own frazzled nerves.

According to the holographic x-rays, the offending projectile is the Halassi Androvar, the most valuable diamond in the universe.  It was shrapnel from a raid on the vaults where the diamond was kept. River wants to remove the entire head, admitting that she is actually contracted to retrieve the gem. The Doctor is shocked but their discussions are interrupted by the king and his guards. He has been listening in and offers to help his false wife by removing his own head, revealing that he is a cyborg.

A brief battle ensues. River fends off the cyborg body with a sonic trowel while the Doctor coerces the king’s head to order his body to stop. The king’s head ends up in a bag before River and the Doctor are transmatted outside. The Doctor finds the entire affair to be hilarious but he’s still put off that River can’t recognize him. He’s also upset that she’s married to her associate Ramone, a man that she’s tasked to find the Doctor and who has had his memory of the wedding wiped. River assumes that the Doctor can only have twelve faces but Ramone has been unable to find any of them. He has located the TARDIS, though.

Meanwhile, Nardole is assimilated into the cyborg body and sent in search of the fugitives.

River, Ramone, and the Doctor walk to the TARDIS. As River steals the TARDIS, the Doctor finally gets the opportunity to have a “bigger on the inside” moment. When this hilariously cheesy monologue is over, he’s shocked to find River sampling the store of Aldebaran brandy hidden behind a roundel. When the king’s head starts to beep, River tries to pilot the TARDIS away but the capsule refuses to move. After she argues with the Doctor over how to drive, they determine that the TARDIS won’t establish a proper space-time envelope since the king is technically split across the inside and the outside.

Outside, the cyborg finds Ramone and demands that he deliver a message. Nardole is (figuratively) beside himself during this process. Inside the TARDIS, the king’s head declares that his body contains a bomb that will burn the world. The cyborg body, now wearing Ramone’s head, soon breaks into the TARDIS and the capsule takes off. When it lands, the Doctor and River snag the head and scramble into a party on the starship Harmony and Redemption.

River is greeted by the Maître d’, Flemming, whom she convinces to lock the cargo hold. They then head to dinner with a quick wardrobe change courtesy of a perfume bottle. River admits that she’s had her lifespan altered – she’s now 200 years old – and that the ship is full of people who are far worse than she is. The ship is where genocide comes to relax.

The couple is seated and River reads from her TARDIS-shaped diary. She reminisces about the man who gave it to her, noting that there are a scant few blank pages left. As they wait, Flemming is summoned to the cargo hold by a distress call from Ramone. Meanwhile, River and the Doctor are soon joined by a man named Scratch who holds special cargo in his own head. After a brief squabble over the diamond, Scratch reveals that the room is full of his own people as a guarantee. This group worships Hydroflax and wants the diamond in his honor.

Despite attempts to hide the head in the bag, the couple is forced to reveal the truth and create a distraction. A bigger one wanders in when Flemming and the cyborg body crash the party. Unfortunately for the king, the cyborg doesn’t want the ruler’s head back since it will die in seven minutes. The cyborg vaporizes the king’s head and Flemming offers the diary as a lure for the perfect replacement: The head of the Doctor.

Flemming reads the diary, noting that River witnessed the Pandorica opening, has been to Asgard for a picnic, survived the crash of the Byzantium (which was turned into a movie), has met Jim the Fish (who is known by everyone), and has just been to Manhattan (which Flemming thinks is a planet). Nardole’s head confirms that River is the Doctor’s consort, but River refuses to admit to his whereabouts. She does, however, state the truth that the Doctor doesn’t love her back. You don’t expect a sunset to admire you back. When you love the Doctor, it’s like loving the stars themselves. She adds that he wouldn’t be sentimental enough to be at her side at this point.

She then takes an honest look at the man she’s been traveling with. “Hello, sweetie.”

They kill some time as the ship pilots into a meteor storm, then fall into the deck below. River catches the falling diamond in her dress and heads off to deal with the ship’s emergency while the Doctor faces the cyborg. He defeats the menace by tempting it with Scratch’s orb that accesses the universe’s banks then introducing the cyborg to the best firewalls in the universe.

The Doctor rushes to the bridge as River recognizes that they are approaching the planet Darillium. The Doctor teleports River to the TARDIS, which she then materializes around him as they argue over how to save the ship. At the last second, they both rush back into the TARDIS and ride out the collision as the ship enters the atmosphere and crashes.

The Doctor takes the TARDIS to the next morning and gazes upon the wreckage, meeting with a rescuer who hasn’t found any survivors. Once the Doctor recognizes where he is, he suggests that someone build a restaurant that would gaze upon the famous singing towers. He also gives the rescue worker the diamond as capital to build it.

He travels to the future, makes a reservation, and then travels to the reservation itself. When River awakens, she is escorted to the Doctor’s side where she finds Ramone and Nardole in the cyborg body, now working for the restaurant. The Doctor himself is in a suit and offers River her own sonic screwdriver.

The same sonic that she will have at the time of her death.

They gaze upon the Singing Towers of Darillium and River is speechless. The Doctor is sad but reassures her as she speaks of stories about them. That their last night together is spent at these towers. In his way, the Doctor offers a confirmation but consoles River with confirmation that he does indeed love her.

Rather, they lived happily… together.

Her first and last stories in the show’s chronology are my favorite River Song adventures. The mystery of her life with the Doctor in Silence in the Library & Forest of the Dead makes for some great comedy and drama, and this story brings some hot chemistry between the two time-crossed lovers.

Holiday episodes are typically heavy with dumb fun and this one is no exception, but the love story here is carried by Alex Kingston and Peter Capaldi all the way to the bank (pun intended). You feel the heart of their relationship in the wacky pulse-pounding adventure and the soul is the quiet moments punctuated by discussions of love.

It’s also the perfect place to end their story. Fans often ask when Alex Kingston will return to Doctor Who, and while I miss her superlative talent on the show, I don’t see how her return pushes the relationship forward. We’ve seen the beginning and the end with flights of fancy in the middle, and this story is the perfect period to close their last chapter together.

I adored the callbacks to the franchise, including the wallet photos of each of the Doctor’s faces. For your Doctor Who trivia nights, those photos were screencaps from The Smugglers, The Two Doctors, Carnival of Monsters, The Hand of Fear, Resurrection of the Daleks, Mindwarp, Survival, the TV movie, The Day of the Doctor, The Parting of the Ways, The Runaway Bride, and The Bells of Saint John. It is interesting that she knows about the Doctor’s prior regeneration limit – by default, that includes the vanity regeneration that she met – and the faces of his former lives (she admitted this in The Time of Angels), but she doesn’t know anything about the Twelfth Doctor.

Also, notably, the Twelfth is not her Doctor. From Forest of the Dead:

You know when you see a photograph of someone you know, but it’s from years before you knew them. and it’s like they’re not quite finished. They’re not done yet. Well, yes, the Doctor’s here. He came when I called, just like he always does. But not my Doctor. Now my Doctor, I’ve seen whole armies turn and run away. And he’d just swagger off back to his TARDIS and open the doors with a snap of his fingers. The Doctor in the TARDIS. Next stop, everywhere.

The Tenth Doctor had no idea that someone could open the TARDIS with a snap of their fingers. River didn’t know the Twelfth Doctor until this adventure. River Song’s Doctor is the one that she married. Her Doctor is the Eleventh Doctor, whom she was just with as her own parents were lost in New York City’s past.

I love the subtle callback with the Twelfth Doctor scanning River with her new sonic screwdriver, thus enabling his former incarnation to save her as a data ghost. There’s also some degree of subtlety with the hidden brandy stash in the TARDIS, especially given the Doctor’s somewhat complicated history with alcohol. The First Doctor claimed to have never touched the stuff, the Fourth Doctor admitted to having a brandy stash onboard, the Third and Fourth Doctors drank regularly, the Ninth Doctor celebrated once with brandy and both he and the Tenth Doctor were rumored to be partiers, but the Eleventh Doctor routinely rejected drinks.

As I said, holiday episodes are often dumb fun, but the thin plot gave our leads plenty of room to shine. It’s a beautiful Christmas tale and a fitting end for a story arc that dominated the Steven Moffat era of Doctor Who.

UP NEXT – Doctor Who: Series Nine Summary

3 thoughts on “Timestamp #271: The Husbands of River Song”