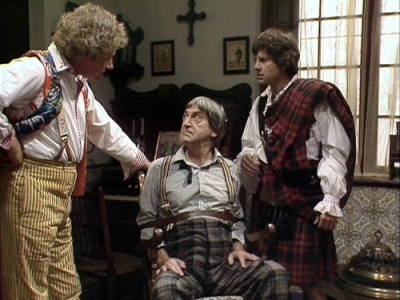 The triumph of The Five Doctors brought Icarus too close to the sun.

Starting in black and white the Second Doctor and Jamie McCrimmon in their TARDIS – although, that’s not the right console – the adventure phases into color as the mission is revealed: The Time Lords have sent them Space Station Camera in the Third Zone. The Time Lords have also installed a recall device on the console. Victoria is off on her own studying graphology – placing this voyage of the TARDIS in the narrow window between The Evil of the Daleks and Fury from the Deep – and excusing the uncharacteristic interference in affairs by the Time Lords is an exercise left to the viewer.

When they materialize, it is in the kitchen of Shockeye, a knife-wielding cook who wants to buy Jamie as the main ingredient in his ideal meal. The Second Doctor talks his way out of the situation by flaunting his authority as a Time Lord, but after they leave, the TARDIS leaves, subject to recall by the Doctor, to prevent the station scientists from studying it. In the kitchen, Shockeye and a woman Chessene scheme.

The Second Doctor and Jamie meet with Dastari, the Head of Projects, and explain that the time travel experiments of researchers Kartz and Reimer threaten disaster for the universe and should be stopped. While they talk, Dastari reveals that Chessene is a special experiment in augmentation called an Androgum, which the Doctor considers dangerous.

His fears seem justified when (unbeknownst to him) she kills a technician who discovers three Sontaran battlecruisers bearing down on the station. Instead of raising defenses, she opens the docking bays. During the discussion with Dastari, the man succumbs to a sleeping drug while the Sontarans invade the station.

Moving to another place and time, the Sixth Doctor and Peri are vacationing near a lake. Peri is bored, but the Sixth Doctor is intent on catching gumblejacks, the finest fish in the universe. After the fishing expedition is a flop, the pair returns to the TARDIS with plans to try a different body of water, but before they can leave, the Sixth Doctor collapses in pain. In a parallel, the Second Doctor is being tortured by the Sontarans. After the Sixth Doctor recovers, he remembers images of jelly babies and recorders, and he concludes that he is a temporal anomaly. He decides to consult with Dastari.

The TARDIS materializes in the kitchen again, but this time the atmosphere is dank and dark, saturated with the scent of death. The Sixth Doctor and Peri explore the station and are confronted by station computer. It tries to kill them, but the Sixth Doctor saves himself and Peri from decompression by dragging her to Dastari’s abandoned office. He reviews Dastari’s journal but refuses to believe that the Time Lords were responsible for the sacking of the station. Peri suggests that a third party is responsible, potentially to destroy relations between the Third Zone and Gallifrey. The pair leaves the office via service ducts and tries to deactivate the computer before it kills them.

Moving to Earth, time unknown, Chessene, Shockeye, and a Sontaran seize a Spanish hacienda after killing the elderly owner. Chessene absorbs the contents of the woman’s mind, discovering that they are situated just outside of Seville, Spain. Their Sontaran escort, Major Varl, announces the arrival of Group Marshal Stike of the Ninth Sontaran Battle Group. They are observed by two humans, Oscar and Anita, who are hunting moths and think that Dastari and the Sontarans are helping victims of a plane crash.

After what seems like an eternity of walking in circles, the Doctor attempts to disconnect the main circuit. Peri is attacked by a humanoid creature in rags, and the Doctor trips a gas trap and is ensnared. When the travelers recover, they discover that the attacker is Jamie. Together, they uncover that the Sontarans are responsible for the attack, and the Sixth Doctor and Peri investigate while Jamie sleeps. The Sixth Doctor discovers that he could indeed be dead if he arrived in the focus point of a temporal experiment, and his status as an anomaly signifies the collapse of the universe.

Peri returns with a recovered Jamie as the Doctor views videos of torture. He concludes that they were red herrings, illusions to dissuade people from investigating further. He also concludes that the Sontarans kidnapped Dastari, the only scientist in the galaxy who can duplicate the symbiotic nuclei of a Time Lord and the subsequent ability to travel through time. Such technology would make the Sontarans unstoppable. The Doctor enters a telepathic trance to find his past self, and he does in Seville.

The antagonists set up their equipment in the hacienda’s cellar while Shockeye snacks on a rat. The Sixth Doctor, Peri, and Jamie make their way to Seville while the Second Doctor discusses matters with his captors. It’s worth noting that the Second Doctor recognizes Sontarans despite never meeting them in his run.

It’s also worth noting that Dastari is fully on board with this plot. So, what was the point in drugging him earlier?

If only that was the sole problem with this story.

The Sixth Doctor, having shed his overcoat due to the heat, talks with Oscar and Anita about what they saw. The humans mistake the travelers for plain-clothes police officers, and the entire group makes their way toward the hacienda. In the cellar, the Second Doctor and Stike have a little rhetorical back and forth while Shockeye studies cookbooks and the Sixth Doctor scouts the area.

While Jamie and the Sixth Doctor enter the cellar, Peri poses as a lost American tourist. Chessene is suspicious, having read Peri’s thoughts, and wheels the Second Doctor through the entry hall as a test. Since Peri has never seen the Second Doctor, she doesn’t react. Peri takes her leave of the hacienda, but Shockeye and his stomach pursue. He later captures her and takes her to the kitchen.

Chessene and Dastari find the Second Doctor and decide to transform him into an Androgum. Chessene enlists Shockeye to move the Time Lord to the operating theater, but betrays him to harvest the brute’s genetic material. Meanwhile, the Sontarans scheme to betray their allies with their newly primed time device, but they don’t realize that the Sixth Doctor reveals that he has sabotaged the craft.

Shockeye awakens and releases the Second Doctor, now halfway transformed, so they can go on a dining spree. Dastari and Chessene double-cross the Sontarans, attacking them with acid and killing Varl before chasing after their wayward diners. The Sixth Doctor, Peri, and Jamie pursue them separately. While they’re gone, a critically wounded Stike heads back to his ship (time circuits in hand) intent on bringing back reinforcements. He forgets that he previously set the self-destruct and is killed in the resulting explosion.

Once in Seville, the Second Doctor and Shockeye end up at Oscar’s restaurant. They order massive amounts of food, but Shockeye pays with Oscar’s life. Shockeye runs as the Sixth Doctor arrives. The Second Doctor reverts to his former self after rejecting the Androgum transfusion, and the whole lot are returned to the hacienda at gunpoint by Chessene and Dastari.

What was the point of this narrative side trip? What a waste.

Once they arrive, the Doctor reveals the truth about the time device and returns the part he stole. Peri unwillingly but successfully takes a trip in the machine to test it. Chessene gives Shockeye permission to eat Jamie, but orders Dastari to detain the rest in the cellar. Once Dastari leaves, the Second Doctor confirms that the Sixth Doctor sabotaged the part so the machine would only work once. The two Time Lords escape from the cellar, and the Sixth rushes to the kitchen to rescue Jamie. He encounters Shockeye and the brute wounds the Time Lord. The two lead a merry chase into the woods as Chessene gives in to her base instincts and licks the Doctor’s blood from the ground.

There are so many issues here. “Once a [category], always a [category]” is an overused and false trope. It’s a horrible message to send, particularly in a franchise built around the premise that anyone can evolve and change.

The Sixth Doctor stumbles across Oscar’s moth-catching apparatus and ends up killing Shockeye with arsenic. A fitting revenge, I suppose, but is the Sixth Doctor really so bloodthirsty? Given the body count in this story and so many others in this era of the show, it seems so.

Nostalgia aside, the Second Doctor is completely wasted in this story. The Shockeye storyline is also superfluous, and the culinary stabs at carnivorous diets were heavy-handed and awkward. I get that writer Robert Holmes wanted to promote his vegetarian lifestyle, but his efforts were painful at best. Which is where we find this story on the whole. Patrick Troughton and Frazer Hines are huge highlights, but Troughton’s talents are squandered by keeping his Doctor restrained throughout the adventure. When the Doctors do get to interact, the chemistry between the two cranky characters is amazing but (sadly) brief.

Honestly, it could have been better off without involving the Second Doctor at all. The key DNA could have come from a previously unknown Time Lord who was trying to stop the experiments. If a recognizable character is required, bring back the Monk (it’s been long enough that he might be less annoying). If it needs to be more personal, try K’anpo Rimpoche – without whom the Doctor wouldn’t have made it past his third incarnation, or even had some of his foundational guidance – or Romana or Susan.

Even better, since the Time Lords of Troughton’s era were very strict about interference in time – they exiled the Doctor for less – this could have been a follow-up to The Mark of the Rani with the Sixth Doctor being driven to save the Master and the Rani in order to save the universe.

The story itself was lackluster and boring before the bloody side-trip to the restaurant. After that bout of filler – I’m guessing that they needed to justify the trip to Spain? – this one fell hard and fast, leading me to a conclusion that hasn’t been made on the Timestamps Project since The Power of Kroll.

UP NEXT – Doctor Who: Timelash