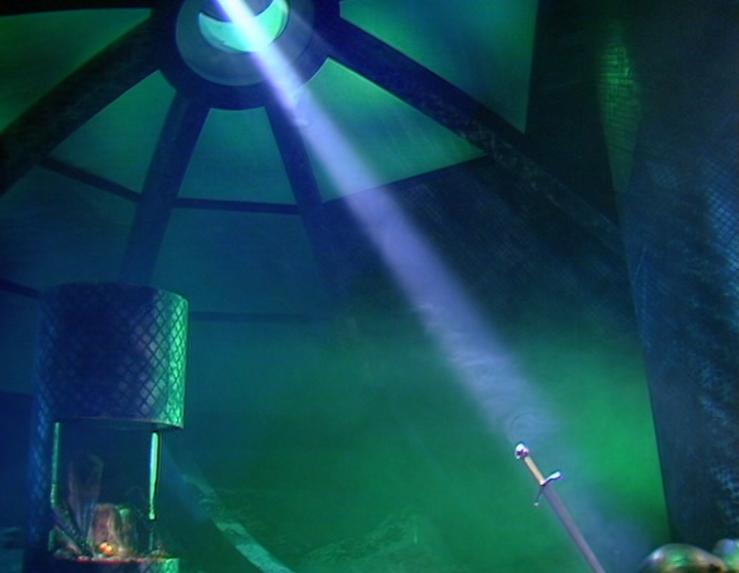 The final classic season begins with an old trope and an old friend. We begin with retired Brigadier Lethbridge-Stewart shopping for trees with his wife, reminiscing on his days with UNIT. Elsewhere, a familiar-looking sword glows with unearthly light as Brigadier Winifred Bambera and her UNIT soldiers conduct military exercises in the country.

On the TARDIS, the Doctor is tracking a distress signal from Earth that has saturated all of time and space, across the boundaries that divide one universe from another. The TARDIS arrives at the source of the signal, three years in Ace’s relative future. Ace and the Doctor hitchhike with archaeologist Peter Warmsly after the new Brigadier bypasses them. As they drive to a nearby battlefield dig, several armored knights crash land from space. The Doctor and Ace infiltrate the UNIT nuclear missile site with old identification cards, one belonging to Liz Shaw. Bambera confiscates the passes, but one soldier remembers the Doctor from Lethbridge-Stewart’s days.

A space knight investigates the TARDIS exterior while the Secretary General calls Lethbridge-Stewart to tell him about the Doctor’s arrival. Bambera takes the Doctor and Ace to a nearby hotel where they can find accommodations. She then spots the TARDIS and walks into the middle of a battle between the space knights.

At the hotel, Ace meets Shou Yuing, a fellow explosives enthusiast, while the Doctor converses with blind psychic innkeeper Elizabeth Rowlinson. Bambera (and Warmsly) end up at the hotel as Lethbridge-Stewart dons his uniform one more time.  The Doctor and Warmsly talk about the scabbard, which has psychic energy and is linked to a strange woman in a crystal ball.

The battle propels the knight into the hotel’s brewery, driving our heroes to investigate. They find the knight, who is a human named Ancelyn who claims that the Doctor is Merlin. The distress call was Excalibur’s Call and placed the planet in the middle of a war that doesn’t belong in this dimension. As the quartet tries to leave, they are ambushed by Bambera (who tries to apprehend them) and the enemy knights (who try to kill them).

The Doctor tries to negotiate, but Bambera is quick to the trigger. The enemy leader is Mordred, and he warns the Doctor of his mother’s (Morgaine, who has waited twelve centuries) coming reckoning. The enemy retreats, the Doctor’s party retires to the hotel, and Bambera and the knight do the ritual dance of dominance.

Using a brother sword to Excalibur, Mordred conducts a ritual to link his home dimension to modern Carbury. The scabbard on the wall launches toward the lake, Mordred is swimming in Highlander-era fantasy, and Morgaine crosses into our dimension. She calls to the Doctor telepathically, and when he refuses her, she declares war on their “last battlefield.”

In the morning, the Doctor and Ace visit Warmsly’s dig, finding a marker that reads “dig hole here” in the Doctor’s handwriting. Ace blows open the hole and they descend into the ground. As Brigadier Lethbridge-Stewart arrives in Carbury, Morgaine attacks his helicopter. The pilot sets it down successfully, although Lieutenant Lavel is injured, and Lethbridge-Stewart sets out for help. He soon encounters Morgaine and her army, and after a discussion, they part ways honorably. Lethbridge-Stewart commandeers Shou’s car.

In the underground tunnel, Ace and the Doctor enter a strange room that obeys the Doctor’s commands. He presumes that the place was built by Merlin, and that he could possibly be Merlin in his own future. The facility is really a spacecraft for traveling between dimensions, and it contains King Arthur (in suspended animation) and Excalibur. Ace accidentally draws Excalibur, releasing an automated defense system. Ace runs the wrong direction and ends up trapped in an airtight chamber that fills with water. The Doctor manipulates some controls and continues to battle the defense system as Ace is ejected to the surface of the lake, echoing the Lady of the Lake legend as she emerges with Excalibur. She passes the sword to Ancelyn, Bambera, and Warmsly as Shou and Lethbridge-Stewart arrive.

In a touching reunion, Lethbridge-Stewart goes into the ship and saves the Doctor, and the duo return to the surface. Meanwhile, Morgaine orders her troops to find Excalibur and kill any who stand in the way. At the inn, Mordred taunts the innkeepers and lusts after Lieutenant Lavel as his mother arrives. Morgaine kills Lavel after extracting military knowledge from her mind, and rewards the innkeepers for their treatment of her son by restoring Elizabeth’s sight.

The hero party returns to the hotel – the women and modern military leaders bristle under Lethbridge-Stewart’s ways – surviving an assault along the way. There, they find that the locals are being evacuated, though Warmsly and the Rowlinsons require a little psychic convincing from the Doctor, but Ace and Shou slip away in the organized chaos. The Doctor and Lethbridge-Stewart hit the road (in Bessie!) to find Ancelyn and Bambera and defend the missile convoy. They leave Ace and Shou at the hotel, armed with a piece of chalk to draw a circle of protection. The former Brigadier also reveals some new hardware from UNIT, including armor-piercing rounds for Daleks, gold rounds for Cybermen, and silver rounds just because. Ace and Shou draw the circle and take refuge as an ethereal darkness falls around them, and Morgaine tries to draw them out with psychic games before summoning a demonic creature.

The missile site is a battlefield with UNIT facing Mordred’s troops. As Ancelyn and Mordred engage each other, the Doctor stops the confrontation but is surprised to learn that the battle was a distraction to allow Morgaine to seek the sword. She stands over Ace and Shou with her summoned creature, the Destroyer. Mordred offers a trade – the captives for Excalibur – but the Doctor succumbs to rage and threatens to decapitate Mordred if Morgaine does not surrender. Morgaine calls his bluff and the Doctor yields, but Lethbridge-Stewart steps up in his stead. Morgaine is unswayed, restarting the battle as the Doctor and Lethbridge-Stewart put Morded in the car and race to the hotel.

Morgaine and Mordred kidnap Bambera and attempt to launch the nuclear missile. In the spacecraft, the Doctor, Lethbridge-Stewart, Ace, and Ancelyn restore Excalibur and try to release King Arthur, but a note from the Doctor reveals that the king died in battle. The good news is that they can still stop the missile. The Doctor faces off against Morgaine and appeals to her honor, compelling her to stop the missile’s countdown. She wants to face Arthur in combat, but news of his death devastates her.

Ace jubilantly destroys the spacecraft and the Doctor renders Mordred unconscious. Mordred and Morgaine are turned over to UNIT as our heroes retire to the Lethbridge-Stewart estate. The ladies take Bessie on an adventure while the men are left to chores and cooking supper.

This was a good (if final) adventure in the classic era with the Brig, and I enjoyed the references from his era to tie the legacy together. He’s back in fantastic form here for his finale, and it really buoys up a story that could have otherwise drown in tried and once true but now tired story tropes. I mean, I groaned when I saw that this was an Arthurian myth tale, and some of the obvious symbolism (Ace as the Lady of the Lake, for example) drew more of them from me.

I did love seeing Ace bond with Shou over their common attraction to explosives. I also love McCoy’s flourishes and gags that counter his growing darkness. Finally, in a reach back to near the beginning of the franchise, I did enjoy seeing Jean Marsh back in action once again. This time she was Morgaine, but way back when she was once Sara Kingdom.

I settled around a 3.5 rating for this one, and I look forward, so this story takes advantage of rounding up.

UP NEXT – Doctor Who: Ghost Light