Keith DeCandido continues 4-Color to 35-Millimeter: The Great Superhero Movie Rewatch with a look at Howard the Duck (1986) and Nick Fury: Agent of SHIELD (1998). – [Tor.com]

Michael French of RetroBlasting takes viewers on a tour of his impressive studio and archive. – [YouTube]

Every episode of Dark Shadows is available to stream on Amazon. – [Decider]

It’s only a year and a half old, but I finally saw Patrick Stewart singing country songs. You should too, then follow the trail to an actual sampler album. – [Billboard]

New York Times bestselling author David Mack will be taking part in his first Reddit Ask Me Anything (AMA) on February 1. This is celebrating the release of his new novel The Midnight Front, a World War II-era epic fantasy. The AMA will take place in the r/fantasy subreddit. – [Blog]

Naomi Parker Fraley, the inspiration for Rosie the Riveter, has died at age 96. – [CNN]

The 2018 Academy Award nominees have been announced. (I’m not sure if I’ll do another Oscars contest on The Weekly Podioplex.) – [Variety]

Neil Diamond is retiring from the concert tour circuit after being diagnosed with Parkinson’s. – [PIX11]

Elton John is retiring from the concert tour circuit after fifty years on the road. – [CNN]

The Shannara Chronicles has been canceled after two seasons. – [Variety]

The sixth Mission: Impossible film gets a title. – [Deadline]

The Chronic Rift – 003: Some Things to Think About
John flies solo on this episode offering reviews from Dan Persons of Hour of the Wolf (movies – Mary and the Witch’s Flower), Keith R.A. DeCandido (TV – Major Crimes) and himself (podcasts – Flip Florey’s Super Saturday Board Game Serial).

The Batcave Podcast: Episode 81 – “Will the Real Robin Please Stand Up?” & “He Who Takes the Ice, Gets the Cooler”
Catwoman finds a ringer for Robin and manages to get him to replace the real deal. But Batman doesn’t appear to be buying it. Can it proves his suspicions before this ringer can reveal Batman’s identity to Catwoman? Plus, Mr. Freeze kidnaps a maharaja, right under the noses of the GCPD and Batman and Robin. Can they rescue him before he is frozen and tossed into Gotham Harbor?

Generations Geek Episode 45 – The A2s Always Were a Bit Twitchy
Science fiction writer Scott Pearson and his daughter, Ella, dive into Aliens (1986) for part three of their epic review of the entire Alien movie series. Remember, always listen to Ripley!

Catching up
Taken – via Netflix

Coming soon
Rent at The Fox Theater in Atlanta 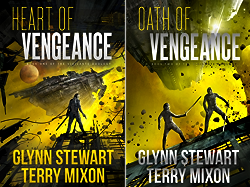 I received both of these as Advanced Reader Copies (ARCs) in exchange for honest reviews. I also fell behind because the end of 2017 was a trial in its own right.

After apologizing to Terry for my tardiness, I promised to make these stories a priority in 2018.

The Vigilante series (which I really hope extends beyond these two titles in the future) is a mix of hard science fiction and pirate action on the high seas with a dash of Star Wars in some of the technology. The main character is Brad, a crewman on his uncle’s merchant ship who faces off against the solar system’s most feared pirate and loses in stellar fashion, but turns his failure into an ascendancy to revenge and opportunity.

The pirate flavor blended with hard science fiction is a unique touch, adding the rules of the pirate code (complete with swashbuckling action with pseudo-lightsabers) to a world of mass driver cannons, literal torpedoes, and non-faster than light travel. The stories have varying degrees of strengths and weaknesses: Heart of Vengeance is fast-paced and dynamic with substantial character growth, but it suffers from the plot driving the characters rather than allowing Brad to take charge; Oath of Vengeance flips that analysis, allowing Brad to take the center seat and push the plot, but his power is limited due to events which I really appreciated from the hard sci-fi aspect but serve to stall everything around them. While the roadblocks presented in Oath make sense, they also frustrate since the end goal is based on a hard time limit.

Weaknesses aside, these are both fun tales told in a pulpy, Saturday afternoon style, and are definitely worth a read.

I gave each book a rating of four out of five.

Women at Warp is a twice-monthly podcast where four women talk about Star Trek, its representations of women, contributions of women behind the scenes, and other fun Trek topics. The crew of Andi, Grace, Jarrah, and Sue have reviewed many aspects of the franchise from a unique perspective, and have also analyzed the voyages of our favorite captains and how they stand the test of time.

Women at Warp can be found on the Roddenberry Podcast Network.

The Timestamps Project
This week’s review is The Mark of the Rani, and next week is The Two Doctors.

Even though the goal line is moving forward as long as more Doctor Who is being made, I’ve finally reached the halfway point in this journey. I’m also starting to consider what I can do next. Long-term rewatch ideas include Star Trek and Stargate, as well as a first-time watch of Dark Shadows. Short-term ideas are far more prevalent, including Quantum Leap, MacGyver, Babylon 5, Farscape, the various Star Wars series, the Marvel Cinematic Universe, and the James Bond films.

The key is time, which is limited in this era of blessing/curse with the plethora of genre entertainment.

Upcoming Podcasts
I have plans in motion for visits to Earth Station One and RetroBlasting. There are also plans afoot with some long-time friends and science fiction classics.