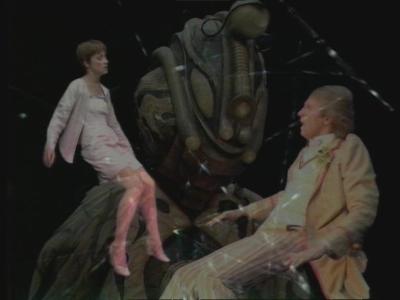 A Time Lord is fooling around with the bio-data extracts of the Doctor and communicating with a mysterious holographic figure, an act that only a High Councilmember can perform. When he is discovered, he kills the security guard and disables the console. On the TARDIS, the Doctor and Nyssa are performing a little maintenance when they start to lose control. The mysterious being that received the Doctor’s biodata attacks the TARDIS and attempts to temporally bond with the Doctor. The attempt fails, and Nyssa discovers that the creature is made from antimatter and is shielded by an area of space called the Arc of Infinity.

On Earth in Amsterdam, two backpackers squat in a crypt at the Frankendael mansion (which is actually a real world place). In the middle of the night, they are awakened by the lights and sounds of a TARDIS materializing. When one of them investigates, he is attacked by a bird-like creature, and the other backpacker runs in fear. He ends up at a hostel where he has a reservation and discovers that his friend was expecting company: His cousin is arriving the next day.

The Time Lord High Council, led by new Lord President Borusa, are investigating the antimatter being and its link to the Doctor. The commander of the Chancellery Guard, a man with a familiar face named Maxil, orders the Doctor’s TARDIS to be recalled to Gallifrey. When it arrives, Maxil arrests the Doctor and Nyssa, and when the Doctor resists, he is shot. Luckily, the gun is set to stun.

What a welcome home. At least the one computer technician is friendly enough to help behind the scenes.

The Doctor and Nyssa are taken to the TARDIS, which Maxil powers down to prevent it from leaving, as the High Council discusses how they could have handled things better than meeting one of their own with guns. Of note, Councilor Hedin is played by Michael Gough, previously the Celestial Toymaker and soon to be Batman‘s butler. He doesn’t seem to age much.

Our remaining backpacker, who we shall call Robin (for that is his name), arrives at the airport to greet his friend’s cousin. His hypnotized friend is named Colin, and the new arrival is none other than Tegan. Robin and Tegan adjourn to a local café to discuss Colin.

Maxil retrieves the Doctor and Nyssa, escorting them by gunpoint to the council chambers. Nyssa, despite being an alien, is welcomed by the High Council. (Speaking of aliens, where are Leela and K9 in all of this?) They discuss the Doctor’s tumultuous history (including Romana’s conspicuous absence, although they don’t use her full name) before detailing the antimatter being’s threat to the universe and how to solve it. Since it is being drawn to the Doctor through his bio-data extracts, the obvious solution is to execute the Doctor. As the Doctor is led away to await execution, Nyssa pleads with the High Council. En route to the TARDIS, the Doctor meets up with Damon, the friendly computer technician, who slips him evidence of a traitor on the High Council.

Damon teams up with Nyssa and arranges to meet with the Doctor. They compare notes (including a mention of Leela) before Commander Maxil shoos the pair away. The order is given to execute the Doctor, and we discover that the antimatter being is in the TARDIS on Earth with Colin. Under the sound of a cloister bell, the Doctor is taken before the High Council and, despite a last minute appeal by Nyssa, given the same treatment as only one Time Lord before: Destruction.

At the exact moment of dispersal, the antimatter being attempts to bond again, and unbeknownst to the High Council, the two are directed into the Matrix. The Doctor’s body, on the other hand, was shielded and hidden by the traitorous councilor. The antimatter being reveals that his is a renegade Time Lord, but leaves the Doctor before explaining further. Meanwhile, Maxil and the Castellan discover that the Doctor survived and begin a search of the TARDIS and the Citadel.

On Earth, Tegan and Robin investigate Colin’s mysterious circumstances. They find the bird creature (an Ergon) and are transported inside the renegade’s TARDIS where they are scanned. The renegade uncovers Tegan’s connection to the Doctor and uses her as leverage to gain the Doctor’s cooperation. The Doctor resists at first, but relents as the renegade tortures Tegan. The Doctor is rematerialized in the Citadel, and the renegade releases Colin as a reward for Tegan’s assistance.

The Castellan analyzes Damon’s evidence, then assembles the High Council to reveal the traitor: Lord President Borusa. As the Castellan weaves a tale of treachery, the Doctor finds Damon and Nyssa in the computer room and makes plans to return to Earth. Meanwhile, the real traitor is revealed through communication to the renegade to be Councilor Hedin.

Oh, Alfred, how could you?

The Doctor and an armed Nyssa race to the TARDIS as Maxil and his guards pursue them. Our heroes come across Hedin, who has Borusa at gunpoint and is demanding access to the Matrix, and are captured by the traitor. Hedin reveals that the renegade is Omega and is going to be transferred to our universe. They are interrupted by the Castellan, who inadvertently kills Hedin and takes aim on the Doctor before being called off. They are all too late, however, as Omega takes control of the Matrix.

The Doctor enters the Matrix and uncovers Tegan’s location. He and Nyssa slip away undetected, return to Earth, and after a lengthy search, they find the crypt. They defeat the Ergon but fail to stop Omega’s transfer into normal matter, revealing an exact duplicate of the Doctor’s appearance. Unfortunately, the transfer was incomplete, and the Doctor, Nyssa, and Tegan chase Omega into the city as the renegade slowly deteriorates. The chase ends at the end of a dock, where the Doctor reluctantly expels Omega back to the antimatter dimension, ending the threat.

After checking on her cousin, Tegan reveals that she has nowhere else to go, and she rejoins the crew of the TARDIS as a willing passenger.

This story got a bit long in the tooth during elements of the chase and the return to Gallifrey, but much of that was absolved in the otherwise solid plot and characters. Definitely a good start to a new season.

UP NEXT – Doctor Who: Snakedance