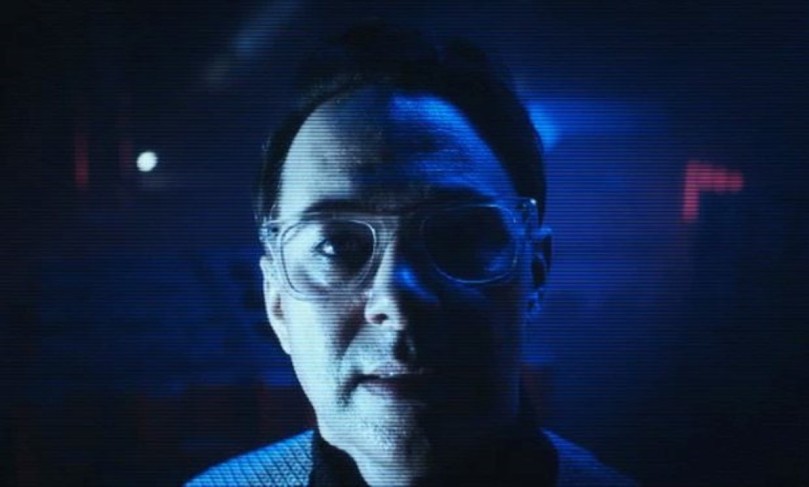 “You must not watch this.”

Professor Gagan Rassmussen introduces a video that he has assembled that details strange goings-on aboard the Le Verrier space station. What follows is a found footage-style episode with a unique title sequence.

We first meet Chopra, a soldier who is upset at deadly killing machine-cum-lovesick puppy Grunt 474. Next are commander  Nagata and soldier Deep-Ando, both of whom mock Chopra for abstaining from the sleep aid Morpheus. They are the rescue crew who came to find Rassmussen. The professor warns that they will all die horribly. Don’t get too attached.

The station is empty with the exception of the Doctor and Clara. The soldiers confront the travelers, who pose as stress engineers, then brief them on the mission. Nagata takes them under her command as they continue to investigate. The Doctor assesses that they are in the thirty-eighth century, a time after India and Japan were merged during a great catastrophe.

Chopra and Grunt 474 have an altercation and Clara learns that the grunts are disposable clones. The team encounters hostile creatures that dissolve into piles of sand when they are dispatched. The Doctor, Clara, Nagata, and Chopra take refuge in a lab while Deep-Ando runs down a different hallway. Clara analyzes the Morpheus pods and ends up trapped inside one of them. When the pod opens, Clara emerges with wires connected to her. The Doctor demands an explanation and investigates a different pod with his sonic sunglasses and the team is soon introduced to Rassmussen.

Morpheus was designed to give people the effects of a full night’s sleep in a five-minute burst, primarily motivated by the drive to work all day long. The Doctor and Chopra are not convinced. In fact, the Doctor calls the technology an abomination. He concludes that the monsters are created from sleep dust, the crusty mucus that forms in the corners of your eyes during slumber, which has evolved from the Morpheus technology which Rassmussen has upgraded on the station.

The team continues to investigate the station as they look for Deep-Ando. Meanwhile, Deep-Ando tries to take refuge in a storage room. The computer demands that he sing Mr. Sandman – the 1954 song by The Chordettes used as the Morpheus jingle – and he is killed by the sand creatures. The rest of the team hears him die, but they are soon forced to deal with a different problem as they run from the creatures and fight against failing systems as the station falls toward Neptune. Rassmussen is consumed by a creature as the team escapes. Clara, Nagata, and the Doctor hide in a freezer while Chopra and 474 hide elsewhere.

While a Morpheus pod floats down the passageway with a message that hazardous materials are in transit, Chopra tells 474 that they’ll have to destroy the station to prevent the monsters from escaping. When trapped by a fire, 474 sucker punches Chopra and takes him to safety. The grunt likes Chopra but has sustained fatal injuries from the fire. 474 sacrifices herself to save Chopra.

The Doctor reviews helmet cam footage – Nagata notes that her team doesn’t have such cams – and wonders why Rassmussen was killed by direct assault. When the creatures (which Clara has named Sandmen) knock at the freezer door, they let them inside. Since the Sandmen are blind, they assume that they can quietly sneak by and escape. They head to the engine room next.

Along the way, the Doctor notes that someone is collecting the footage. He also notes that the images are being collected by the dust itself and being fed into the Sandmen. Since Clara was inside a pod, she has been infected and is now transmitting video from her own eyes. The Doctor promises to save her and destroy Morpheus forever.

Chopra assumes that everyone else is dead and returns to the rescue ship. He’s soon consumed by the Sandmen.

In the engine room, the Doctor realizes that the system failures were deliberate. He takes Clara and Nagata to the rescue ship where he finds Rassmussen not dead and willing to let the Sandmen spread amongst humanity. The creatures speak to him but have the mentality of babies. While he enacts his plan, he unleashes a King Sandman against them from the Morpheus pod.

The Doctor plays Mr. Sandman as a distraction so they can escape. Nagata shoots Rassmussen to stop him – an act that annoys Clara – and the Doctor decides that they need alternative transport to Triton so they can destroy the Morpheus project. Unfortunately, the Sandmen are guarding the TARDIS, so the Doctor destroys the grav-shields so the station and the Sandmen will be destroyed as the station crashes.

As the TARDIS dematerializes, we learn that Rassmussen has embedded the secrets of Morpheus in the video. By watching it, we are all infected. Joy.

As far as I’m concerned, the elephant in the room for this story is the format. The found footage genre evolved from the epistolary novel format, which typically tells stories via diary entries or correspondence. Bram Stoker’s Dracula (1897), Mary Shelley’s Frankenstein; or, The Modern Prometheus (1818), and H.P. Lovecraft’s The Call of Cthulhu (1928) are prime examples. In cinema, the genre rose from 1980’s Cannibal Holocaust and The Other Side of the Wind by Orson Welles (shot in the early 1970s and released in 2018) but really took off with The Blair Witch Project in 1999. With the Paranormal Activity series (2007-2015, 2021-present), •REC series (2007-2014), Cloverfield (2008), District 9 (2009), Apollo 18 (2011), Chronicle (2012), Europa Report (2013), and so on, the first two decades of the 2000s became immersed in the format. These films are inexpensive to produce and rake in money, making them a huge return on investment for studios. In fact, a reviewer in 2012 noted that the genre had defined the era for horror and science fiction like slasher movies did in the 1980s.

In general, I dislike these types of films. They do the job, and I give them credit for footing the bill for projects that I do like, but they feel shallow and don’t appeal to me for deeper storytelling purposes. From the previous list, Cloverfield and District 9 stand out as two that captured my attention, but I don’t revisit those titles often. It follows that this cinematic genre in Doctor Who presents a huge stumbling block for an otherwise Twilight Zone/Outer Limits kind of story.

It’s obvious that this story pulls from The Ring (2002) – itself a remake of the Japanese film Ring (1998), which was based on the Koji Suzuki novel from 1991 that spawned a ton of similar projects worldwide – which is a story that I really like since it highlights the depravity of humanity, something that the Doctor Who universe does in spades while showing us that there are ways to overcome it.

In fact, this calls back to the classic era stories where the Doctor does not defeat the villain. Victory in this case (and many of the classic serials) was simply to escape and survive.

I don’t have a problem with the monster being the “sleep bugs” in the corner of the eye any more than I have a problem with the mites that perpetually live on human flesh. I have had a healthy appreciation for the microscopic world since the Martian invasion was stopped by the common cold in The War of the Worlds. Granted, mucus monsters are an odd choice, but developing a squickiness for a universal something that we cannot control is a tried-and-true hallmark of horror sci-fi.

So is the depravity of man, especially when one person is willing to sell out the entire human race over a belief. Even if Rassmussen was nothing special in the villain department. He reminded me of the slasher villains that stalked in the shadows and refused to die, but he lacked menace. He just existed as a bad man, mediocre at best.

All of that said, I do have a problem focusing through the found footage film genre. That distraction pulls this experience down for me. I applaud the attempt and experimentation, but it’s not for me.

Now, if you’ll excuse me, I need to go wash my face.

UP NEXT – Doctor Who: Face the Raven

Thus sayeth the cookie.
"Curse your sudden but inevitable betrayal!"
The setting sun cast an eerie glow behind the Oquirrh Mountains.