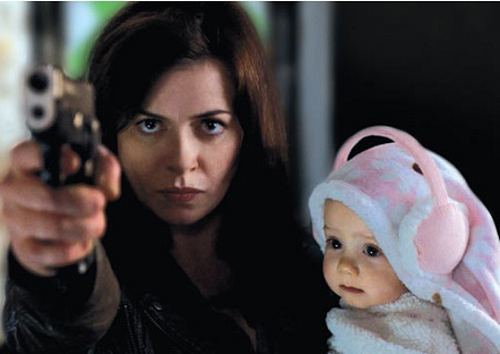 Who are they? Torchwood.

Early in the morning, absolutely despicable child rapist/killer Oswald Danes is scheduled for execution by lethal injection. He refuses to make a final statement and the injections begin. Danes convulses violently.

At the CIA, Esther Drummond is seeing several references to Torchwood as she talks with Rex Matheson on the phone. The institute’s name has been sent all over the UK, but as Drummond starts digging into it the entire system crashes. On the other end of the line, Matheson gets into a car accident and ends up taking a piece of rebar to the chest. He is taken to the emergency room.

Meanwhile, Gwen Cooper wakes up from a nightmare about Torchwood. Gwen, Rhys, and their daughter Anwen are living in middle-of-nowhere Wales. Gwen tells Anwen a story about aliens while feeding her. Helicopters have been flying overhead so tensions are high. There’s also a knock at the door – Gwen and Rhys pull out an arsenal of weapons just in case – but it’s just two lost hikers.

Or at least they seem to be until the hikers exchange knowing glances as they leave.

Matheson survives his surgery in a modern-day miracle. Turns out that no one has died in the hospital over the last twenty-four hours, and it’s not limited to this location. It’s worldwide. It also means that Oswald Danes survived, and he’s gearing up for a Fifth and Eighth Amendment defense so he can be set free. Matheson has a hard time wrapping his head around this Miracle Day.

Gwen and Rhys are busy painting the walls when a mobile phone rings. Andy Davidson bears the bad news that Gwen’s father is in the hospital. Gwen apologizes to Rhys because this means that they have to go back.

Further investigation into Torchwood reveals that every reference has been scrubbed under the 456 Regulations. Drummond crawls through the archives to find any physical reference to Torchwood. She finds the 456 files and photos of the Torchwood Three team, and then she meets Captain Jack Harkness. Jack asks her to accompany him but Drummond runs. She finds that the man in charge of the archives has been murdered and Jack saves her from being shot as well. To avoid being killed by suicide vest, Jack and Esther take a dive through a window into a fountain in the courtyard.

Jack tells her about the history of the Torchwood Institute while he mulls over the fact that he was injured. His intent is to keep Torchwood buried to maintain Gwen’s safety. He wiped the traces of Torchwood using malware. He secretly gives Esther a dose of Retcon and then poses as FBI agent “Owen Harper” to witness the suicide bomber’s autopsy.

Rex is able to watch the proceedings through the hospital’s security cameras. The bomber is an exploded mass of burned tissue and bone, but he’s still conscious and alive. Jack suggests severing the head to put the man out of his misery, but that doesn’t work.

Gwen and Rhys return to Cardiff with Anwen and meet up with Andy. Gwen is perplexed by the mass of people paying honor to the Miracle. They go inside and reunite with Gwen’s father despite her mother’s protests. Gwen later gets a briefing on the Miracle Day from Andy – Jack simultaneously hunkers down in an abandoned building and reads while he eats – and they discover that the human race has four months to live if no one else dies. Rhys is understandably angry about Gwen getting involved and she relents.

Esther wakes up in her apartment. The only evidence of the previous night’s adventure is a large bruise, but she doesn’t remember a thing. Jack has a bruise as well, so his healing factor has apparently stalled. When Esther goes to work, she finds the last remaining physical Torchwood file but she dismisses it due to the Retcon. Rex calls her and they discuss Torchwood and the Miracle, discovering that Torchwood resurfacing coordinates with the last time that a human died on Earth. Rex checks himself out of the hospital and takes a taxi to the airport. He’s headed to the United Kingdom despite the severe amount of pain that he’s in.

When Rex arrives, he gets a handgun from UK officials and drives to Wales while Esther gathers intel about Gwen. He eventually arrives at Gwen’s doorstep and collapses at gunpoint. When he wakes up, he’s tied to a radiator as Gwen and Rhys try to escape. Rex escapes easily, but the group of them are interrupted by a rocket that passes through the entire house and explodes in the hillside behind.

Gwen kills the shooter with a pistol – Anwen, babe in arms, smiles as her mother goes to work – and Jack arrives in a Land Rover to take everyone down the beach at high speed. Gwen finds a rocket launcher in the backseat and destroys the helicopter. When Rex asks who Gwen and Jack are, she defiantly replies, “Torchwood.”

The team regroups in Cardiff at Roald Dahl Plass. Gwen instructs Rhys to take Anwen to Gwen’s mother’s house. Gwen still has the Eye-5 lenses, but the rest of Torchwood’s technology was lost in the Hub’s destruction. Jack reveals that he can no longer heal himself and is a mortal man. Rex greets an arriving cavalcade of police cars with open eyes.

Rex has ordered a rendition. Torchwood is being handed over to the United States.

Torchwood covers new ground with this series. This was the first episode of Torchwood to be principally filmed in the United States (and the third episode of the Doctor Who universe after The Impossible Astronaut/Day of the Moon) and the first episode in the larger franchise to film in California. It was also broadcast in the United States (and Canada and Australia) before the UK, which was another first.

The big narrative ground that Torchwood ventures into is swapping roles for Jack and the rest of the world. By removing his powers of resurrection and giving them to everyone else, Jack is placed in a position of extreme vulnerability and weakness. It’s a great starting point for the heroes as they set out to figure out what’s going on.

I appreciate how this episode also explored concepts like the force majeure (unforeseeable circumstances that prevent someone from fulfilling a contract, such as an “Act of God”), the Fifth Amendment (no “person be subject for the same offence to be twice put in jeopardy of life or limb”), and the Eighth Amendment (“cruel and unusual punishments [shall not be] inflicted”).

I love how downright creepy and despicable Bill Pullman is as Oswald Danes. I mean, come on, this is the magnetic lead from Independence Day and Spaceballs, and here we find him just oozing with malice and soullessness.

More than that, I enjoy how this episode placed our team in the post-Torchwood world and forced them back together in rather explosive circumstances. As much as they don’t want to get the team back together, they absolutely have to in order to save the world from certain destruction.

UP NEXT – Torchwood: Rendition