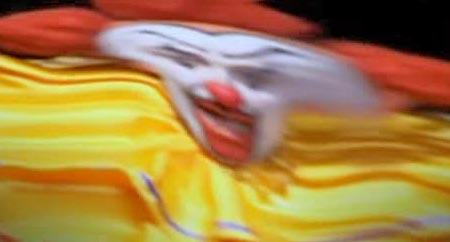 A group of kids is playing football in a field when one of them kicks the ball into the forest. A boy named Tony goes for the ball, but he ends up getting snurched by a clown.

At the Smith house, Sarah Jane considers the three recently missing children as Luke reads an e-mail from Maria, obviously pining for her. Clyde arrives with news of new arrivals across the street. The boys head to school as Clyde leaves Sarah Jane with the idea that Maria might have left something behind.

By chance, the boys meet Rani, one of the new residents of Bannerman Road. They all head to class and meet the new headmaster, Mr. Chandra, a rather humorless chap. Clyde gets in trouble off the bat and Rani keeps seeing the mysterious clown.

Sarah Jane brings a welcome gift of tea and biscuits to her new neighbors. She meets Gita, Rani’s mother, and scans the house for alien residue. The coast is clear.

Also, Sarah Jane prefers to be called Sarah Jane, even though the Doctor has nearly always called her Sarah.

By accident, Clyde hits Mr. Chadra in the head with a basketball, so he’s called to the headmaster’s office. While waiting for his talking-to, he encounters the clown and gives chase. He finds the clown in a restroom mirror and is inadvertently saved from doom by the headmaster.

Their discussion doesn’t go well and Clyde resolves to consult with Sarah Jane. He spots the clown with Luke after school, but Luke can’t see it. The boys try to locate it but only find a red balloon. Rani arrives in the nick of time to stop them from touching it, expressing a deep interest in the phenomenon. They all walk to Bannerman Road where the Chandras meet Clyde and the Smiths.

In the attic, the team develops a plan: Luke decides to keep an eye on Rani while Clyde and Sarah Jane investigate the missing children. Both teams eventually come to Spellman’s Magical Museum of the Circus, home of a clown who was handing out tickets to the attraction. Only children with tickets were seeing the clown apparition.

At the museum, we meet the strange Elijah Spellman and learn that Sarah Jane suffers from coulrophobia (the fear of clowns). During their tour, Clyde spots a watercolor picture that resembles their mysterious clown. Sarah Jane identifies it as the Pied Piper, a legendary figure of folklore that stole children from Hamelin. When Luke and Rani arrive, the clowns in the museum come to life and give chase. Sarah Jane disables them with the sonic lipstick and leads the kids out, but the doors are locked.

Spellman reveals himself as the clown, the Pied Piper, and he is intent on having the kids. The entity feeds off of their fear. Rani’s phone rings and somehow freezes Spellman, and the team is able to run back to Bannerman Road. Once they arrive, Sarah Jane offers Rani the Matrix choice between going back to her normal life and seeing how far the rabbit hole goes.

She’s a bit overwhelmed by the truth and Mr. Smith, but sticks around as the alien “supercomputer” researches clowns and missing children. The clown, also known as Odd Bob, is traced back to a meteorite from the Jeggorabax Cluster that landed on Earth in 1283. It’s currently at the Pharos Institute, and Sarah Jane resolves to get a sample.

Sarah Jane offers Rani a device to keep her safe, trying to temper the young woman’s expectations. Later, while researching clowns, Luke asks her why she’s afraid of clowns. She explains that, as a child, she was frightened of a clown marionette owned by her Aunt Lavinia. It was one of the few times she missed having parents she could call on for comfort.

As the morning comes, Sarah Jane visits the Pharos Institute and secures a sample of the meteorite. Spellman arrives and rattles her, promising that families will perish at the deaths of a nation of children. At the school, a batch of red balloons fall from the sky, and those children that touch them lose free will. They mindlessly march, like rats to a piped tune, to Spellman’s museum.

Mr. Smith analyzes the meteorite and determines that Odd Bob is one of a species that feeds on emotion. Luke calls to alert her to the marching children and she meets the team at the museum’s front doors. She uses Mr. Smith to dial every student’s mobile, releasing them from Spellman’s thrall.

Unfortunately, the clown steals Luke, so Sarah Jane enters the museum and locks Rani and Clyde out. She heads to the Hall of Mirrors and tries to navigate the maze to Luke. Using the sonic, she shatters a mirror and uncovers a door.

Clyde and Rani sneak in through an open window as Sarah Jane confronts the clown. He tells her that he’s amassed a lot of children over the last 700 years, even though they fade away over time. He refuses to return them because to do so would eliminate his power.

Clyde and Rani figure out how to defeat fear: They start telling jokes, weakening Spellman with humor. As he weakens, Rani notices that the meteorite sample is glowing. Sarah Jane holds it out and pulls Spellman back into the vessel in which he came to Earth. Luke returns and all is well.

The rest of the children return home with no memory of their time away. Sarah Jane puts the meteorite into a safe box. Clyde makes amends with Mr. Chandra with the team’s help.

And Rani becomes a full-fledged member of the Bannerman Road Gang.

I like to think that her close relationship with the Doctor is why Sarah Jane prefers others to call her by both names. Only the Time Lord gets the special privilege.

That aside, this is a creepy and well-told story, hinging on a loose historical connection and playing off of a popular phobia. Bradley Walsh was phenomenal, channeling completely different (but each incredibly unsettling) personas for each face that he wore. Spellman’s robot clown army echoes the Nestene Consciousness (which we know from Spearhead from Space, Terror of the Autons, and Rose), and the clown aspect provide a similar level of unease as The Celestial Toymaker and The Greatest Show in the Galaxy, in the latter of which the clowns were also robots.

I really admire Rani’s forthright zeal for the unknown. She’s completely enamored by the life that she could only speculate about, and I think she’ll bring a lot of energy to the team. I did keep looking for the Rani, but I’ll get used to the name in short order.

UP NEXT – Sarah Jane Adventures: Secrets of the Stars

4 thoughts on “Timestamp #SJA8: The Day of the Clown”