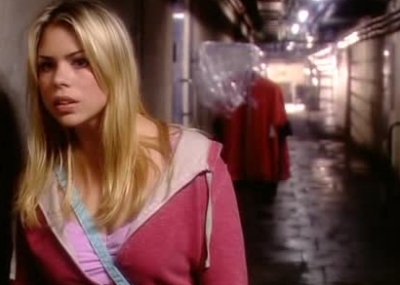 The beginning of the Third Doctor’s era in 1970 was a major turning point for the franchise, signaling a shift in production (black and white to color) and tone (cerebral plots to more action-driven stories). It happened again to a smaller degree in 1982 as the Fifth Doctor literally unraveled his predecessor’s scarf and tied off the loose ends in a trilogy of Master stories. In 1996, the television movie signaled another paradigm shift after a seven year hiatus, and nine years later Doctor Who did again upon starting up in the twenty-first century.

This story and era starts with the global view, zooming in on the hectic life of Rose Tyler, a young woman who works at Henrik’s department store. She goes to work, has lunch with her boyfriend Mickey Smith, and almost leaves the store with the lottery money. She takes it to Chief Electrician Wilson’s office, but instead of completing her task, she finds an empty office, an army of mobile mannequins, and a strange man named the Doctor.

Together, the Ninth Doctor and Rose run from the Autons – it’s been, what, thirty-four years since we saw them last? –  and Rose is pushed out of the store as the Doctor detonates a bomb that destroys the upper floor of the building. Rose returns home, not noticing the rickety blue police box across the street and trying to avoid the hovering affections of Mickey and her mother Jackie. Mickey leaves with a mannequin arm that came from the store as Rose goes to bed.

The next morning, Rose is visited by the Doctor, who has been tracing a plastic signal. The Time Lord is unfazed by Jackie’s flirtations, and he’s impressed by his face, presumably the first time he’s seen it since regeneration. He and Rose are attacked by the mannequin hand (which crawled back to the Tyler residence) and immediately leave; the Doctor is intent on solving the mystery and Rose is intent on understanding what’s going on.

The Doctor leaves Rose outside his TARDIS, and as she walks away she sees the capsule dematerialize. She goes to Mickey’s place and searches the internet for any sign of the Doctor. She stumbles onto a website dedicated to the mystery of the Time Lord, run by a man named Clive. She and Mickey drive to Clive’s home and Rose learns about how the same man appears throughout time. The Doctor is a legend woven throughout history, and when disaster comes, he’s there with the storm of death behind him.

Outside, Mickey encounters a moving trash bin that replaces him with a plastic duplicate. When Rose returns, the pair goes to lunch. Auton-Mickey interrogates Rose about the Doctor, and the Time Lord arrives just in time to save her from the doppelganger’s rampage. The Doctor enters the TARDIS, and Rose joins him moments later after processing her “bigger on the inside” moment.

The TARDIS is gorgeous, reflecting a coral pattern in the console room. Rose learns about the Doctor as the Time Lord connects the Auton’s head to the console in an attempt to trace the signal. The TARDIS moves to the edge of the River Thames, shocking Rose even further, but her confusion turns to anger over the Doctor’s dismissal of the real Mickey’s fate. The pair try to trace the transmitter for the Nestene Consciousness, the controlling source of the Autons, and Rose narrows it down to the London Eye. They descend underground with a vial of anti-plastic to end the threat.

They enter the Nestene base where the Doctor confronts the Consciousness. Rose leaves the Doctor when she sees the real Mickey, who was kept alive to maintain the copy. The Doctor challenges the Consciousness under something called the Shadow Accords, trying to reason with it when he is captured by two mannequins. The Consciousness detects the TARDIS, a superior technology, and confront the Doctor over the death of Gallifrey in the Time War. It begins the invasion ahead of schedule.

In the Queen’s Arcade mall, the people are terrorized by rampaging mannequins. Jackie is chased, Clive is killed, and the streets are overrun. Underground, Rose and Mickey run for the TARDIS but are locked out. Rose comes to the Doctor’s rescue, attacking the Autons and knocking the anti-plastic into the Consciousness. The transmission stops, sending the Autons into confusion as the base explodes. Rose, Mickey, and the Doctor escape in the TARDIS as the Consciousness is apparently destroyed.

When the TARDIS lands, Mickey runs in confusion and fear. The Doctor invites Rose to travel with him – Mickey is too afraid of the alien – but she turns him down. Rose watches as the TARDIS dematerializes, but as she and Mickey walk away, the Doctor returns to tell her that it’s also a time machine. That wins her over: She kisses Mickey goodbye and runs for the TARDIS.

The show has changed, and just like with the Seventh Series, it was necessary for survival. Production values jumped, plot structures shifted, and episode lengths shortened, but the mythology is still the same. The franchise also adapted to modern technology, bringing the internet and mobile phones to bear when they haven’t really been addressed to date.

As a companion, Rose Tyler fulfills her role of gateway to the world of the Doctor. The Ninth Doctor himself offers a view into the world of a weary war veteran who is worn and nearly broken from the horrors he’s witnessed (or even taken part in personally).

There’s a lot of potential from this point forward, and this is a strong showing that hardly needs the regeneration handicap to score well.

UP NEXT – Doctor Who: The End of the World