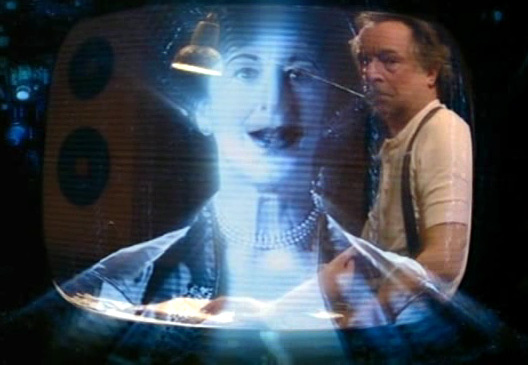 Grandma was right after all.

An electrical storm rages over Magpie Electricals as the owner, Mr. Magpie, despairs over his financials. An arc of red lightning strikes the roof, turning on the television and addressing Magpie before sucking him into the device. Nearby, a family is watching television as the father muses about the coronation and leaves the house in a suit and medals.  The grandmother – guest star Margaret John – tells her family that the television will rot their brains.

The Doctor and Rose emerge from the TARDIS all decked out for an Elvis Presley concert in Las Vegas, ready to race to The Ed Sullivan Show on a scooter. They are dismayed to find out that they are actually in London, circa 1953. Rose notes that there are a lot of television aerials as they meet Magpie on the street as he delivers a new television. Coming back to that family from before – the Connollys – they’re living in fear of the grandmother and something that happened to her face. Another neighbor is taken away, drawing the attention of the Doctor and Rose who learn that the abductions are happening all over. They pursue the car on their scooter, but the “men in black” get away.

It turns out that Magpie is being driven by the woman in his television. In fact, the message is burning into his brain. At the Connolly residence, the son tries to check on his grandmother, but the father stops him in anger. The berating lecture is interrupted by the Doctor and Rose, posing as government officials. The Doctor provides Mr. Connolly a lesson in gender equality and Rose adds a little spice with a lesson on the Union Jack. As Mr. Connolly works, the rest of the family talks with the travelers about the grandmother. Mr. Connolly tries to bluster about being the master under his roof, but the Doctor has none of it, unleashing his dark side in order to uncover the menace that is plaguing them.

The son takes the travelers upstairs to meet the grandmother. Her face is completely missing, but the investigation is cut short as the men in black arrive, abduct the woman, and knock the Doctor for a loop with a helluva right hook. The Doctor pursues the men in black on the scooter as Rose notices the red lightning around the television. She notes the manufacturer – Magpie Electricals – and departs with one last jab at the Connolly patriarch.

The Doctor chases the car up to a staged roadblock, forcing him to sneak in a back way. He finds a cage filled with faceless victims, but they soon swarm around him like a mindless horde. The men in black soon apprehend him. Meanwhile, Rose interrogates Magpie about his bargain televisions and the business boom for the pending coronation. The intelligence inside the television tells Magpie that it is hungry, and the proprietor obliges by feeding it. Unfortunately, the Wire’s next meal is Rose.

The men in black, actually the local police, interrogate the Doctor. He points out the Detective Inspector Bishop’s team is simply sweeping the victims off the street in order to keep things quiet before the coronation. When Bishop –  “It’s written in the collar of your shirt. Bless your mum.” – admits that he has no idea what’s going on, the Doctor joins the team. Their discussion is cut short when a newly faceless Rose is brought in as the newest victim.

The Doctor gets angry. Very angry. Okay, downright enraged. There is nothing now that can stop him.

As the new day dawns, the Connollys gather around the television to watch the coronation. The Doctor and Bishop arrive at the Connolly home, and the patriarch blusters as his son Tommy sets him straight. Mr. Connolly values his reputation and image above everything else, flaunting his military service and standing in the neighborhood as his shining attributes. His wife, however, is disgusted to learn that he turned the grandmother over to the authorities, calling her husband a monster as she tells Tommy to help the Doctor.

Tommy leads the Doctor and Bishop to Magpie Electricals. The Doctor discovers the alien influence as the televisions all light up with the captured faces of the Wire’s victims. When Magpie returns, the Doctor is introduced to the Wire and learns that it is looking for energy to restore its corporeal body. The coronation is the perfect time to feed with millions of faces glued to their television sets. It attacks Tommy, Bishop, and the Doctor, but the threat of a sonic screwdriver causes it to release the Doctor and Tommy early. It jumps to a portable receiver and Magpie takes the Wire on the road.

The Doctor and Tommy leave a faceless Bishop at the shop and rush to the rescue. The Doctor builds a device from parts in the shop before tracing the Wire to Alexandra Palace, the largest transmitter antenna in the area. They arrive to find Magpie climbing the transmitter and spoof their way in as the King of Belgium. The Doctor leaves Tommy with the gadget as he climbs the tower with a spool of wire, but Magpie beats him to the top. As the Wire begins its feast, Magpie begs the Doctor for help and the Wire attacks the Time Lord. The Wire vaporizes Magpie, leaving the Doctor open to connect his device. Unfortunately, it short-circuits but Tommy comes to the rescue and defeats the life-sucking menace.

All of the victims have been restored to their normal selves, and the Doctor reveals that he trapped the Wire’s essence in a Betamax tape – presumably pulled from the Doctor’s infamous bottomless pockets since it wasn’t available until 1975 – effectively inventing the home video thirty years early. Families are reunited and Mrs. Connolly kicks her abusive husband out of the house. It’s in grandma’s name after all. The Doctor and Rose take advantage of the coronation party in the street to enjoy history, and the Wire will be taken care of by simply taping over her.

That’s a deep cut given the BBC’s history of erasing tapes!

The Doctor leaves his scooter to Tommy and Rose encourages the boy to make amends with his father. New monarch, new age, new world, but there is always time for kindness and love. Our travelers raise glasses of orange juice in a toast as the adventure comes to a close.

The highlight of this episode is the dark Doctor. His ruthlessness, when pushed to the limit of his patience and mercy, is an artifact of the Ninth Doctor, something that makes sense given that this episode was originally written for Series One. The enemy was both menacing and humorous and reminded me of the killer plant in The Little Shop of Horrors.

On the downside, there were far too many Dutch angles for my liking. I get why they’re an important part of cinematography – they are a visual representation of unease, disorientation, tension, and so on – but there seemed to be a lot of them. There was also a missed opportunity to highlight the Doctor’s fear of heights at the transmission tower.

Otherwise, the mystery and the action really kept this one going.

I’ll wrap up with two trivia notes: First, Margaret John returned to Doctor Who after thirty-eight-years since her last appearance in Fury from the Deep; Second, the Doctor seems to share a fandom with Michael French, a friend of the Timestamps Project, as he quoted “Never Too Late” by Kylie Minogue.