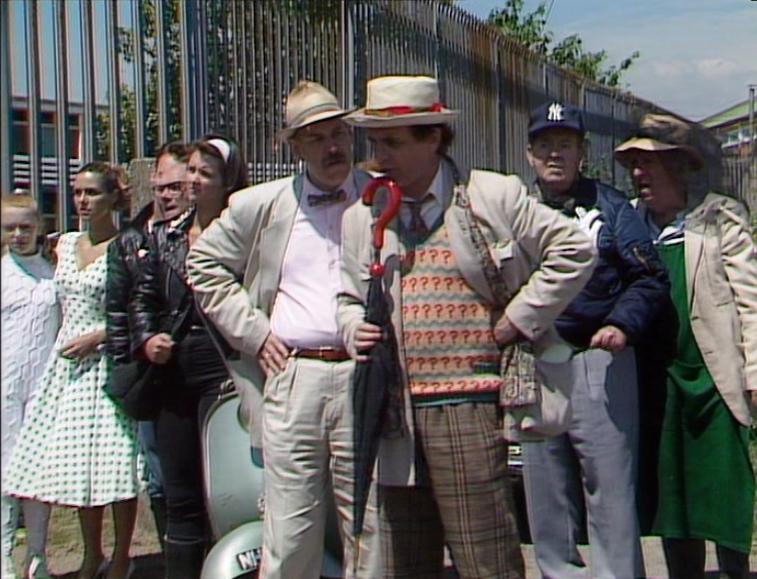 Not quite the Happiest Place on Earth, but Shangri-La nonetheless.

The story drops all of us right into the thick of things with a huge battle on an alien planet. On the high ground is a squad with extensive flags – appropriately known as the Bannermen – and on the losing side is what looks like a group of green toy army men. A woman in white named Delta runs with the last green survivor to a ship, and with his dying breath, he sends her off-planet with a glowing box. Gavrok, the leader of the Bannermen, pursues with gusto.

The opening was actually quite exciting.

The Doctor and Mel land the TARDIS at toll port G715. When they exit, they are met by the Tollmaster with a prize: As the ten billionth customers, they get free parking and a trip to Disneyland circa 1959 with a tour group of aliens disguised to look human. Just as they are ready to leave, Delta lands her ship at the toll port and seeks refuge on the tour bus. The tour bus leaves and, after witnessing the woman’s arrival, the Doctor follows in the TARDIS.

On Earth, a pair of American CIA agents drive up to a legitimate telephone box and call the White House. They are told to track a satellite that was freshly launched from Cape Canaveral. Unfortunately, the tour bus strikes the satellite and falls to Earth, but fortunately, the Doctor is able to use the TARDIS to control the descent and save all of the passengers. Instead of Disneyland, the tour group ends up at the Shangri-La holiday camp in Wales.

The camp’s leader, Burton, mistakes the extra-terrestrial tour group for one of his scheduled arrivals, so they end up with lodging until the bus is fixed. Mel ends up bunking with Delta, and the Doctor and Murray (the intergalactic tour guide) meet with the camp’s mechanic named Billy. Billy, of course, is lost when it comes to the alien bus engine but he does his best with the Doctor’s help. Meanwhile, they meet Rachel (call her Ray), a motorcycle-riding woman in a leather jacket who carries her own tools. They also accidentally break the crystal needed to fix the engine, so the Doctor decides to grow a new one, but the process will take twenty-four hours.

Back at the toll port, Gavrok finds out where the tour group went and then kills the Tollmaster in cold blood. On Earth, Mel and the Doctor discuss Delta as Billy shares lunch with the refugee. Later that night, they all attend the Get-To-Know-You social, dancing the night away to Billy’s singing talent. Sadly, Ray figures out during a performance of Why Do Fools Fall in Love that Billy is falling for Delta. The Doctor ends up consoling Ray in the linen storage room, which works in their favor as one of the tourists transmits Delta’s coordinates to Gavrok. The tourist discovers the Doctor and Ray, threatening to kill them. Back in their shared room, Delta and Mel watch as the mysterious glowing package starts to hatch, revealing one of the green aliens from the opening battle.

Of course, Mel screams. Goodness, can she scream.

The Doctor and Ray are inadvertently saved by Gavrok as the soldier activates a tracer that disintegrates the bounty hunter. The resulting blast knocks the Doctor and Ray unconscious. Billy arrives to see Delta cradling the green baby alien, and he spends the night to learn about Delta. The woman is a princess and the baby (now a painted human infant in a plush green onesie) is the last Chimeron. The pair leaves Mel to sleep and take a trip on the motorcycle.

The two CIA agents arrive nearby asking about the satellite, but the get a lesson on butterflies, metamorphosis, and beauty from a beekeeper. The moral is a bit heavy-handed and these characters are a waste in this story.

The Doctor and Ray recover just in time to see Delta and Billy driving away. They find Mel and decide to coordinate an evacuation. Mel and Murray gather the tourists while the Doctor convinces Burton of the emergency. The Doctor and Ray leave Mel and Murray in charge as they go in search of Delta. They find her and Billy at the lake, where Delta has been telling Billy of her plan to take the rapidly growing hatchling to safety before bringing her case against the Bannermen to the authorities. The whole group packs up and returns to the camp as the Bannermen land, encounter the CIA agents, and take them as prisoners. Shortly thereafter, the Bannermen find the camp and destroy the tour bus just as it is about to take off. Gavrok demands to know if Delta was aboard and Mel lies, but her deception is uncovered as the Doctor’s group approaches. They flee and Burton convinces an incensed Gavrok to use Mel as bait, saving her life.

The Doctor stashes Delta and the child at the nearby beekeeper’s home before returning to the camp and petitioning Gavrok for mercy. Mel and Burton are released, and the Doctor rides away with them. Gavrok shoots a flare, prompting the guards with the CIA agents to restrain them and pursue the Doctor. Ray frees the agents as the Bannerman guards tag the motorcycle with a homing beacon.

At the farm, Delta feeds the child with a special jelly. Billy swipes a sample while Delta is distracted by Ray’s return. The Doctor and his group return shortly thereafter. Back at the camp, Gavrok discovers the TARDIS and booby-traps it with a sonic cone, then trace the homing beacon to the beekeeper’s farm. As the scouts advance on the farm, the child evolves and warns Delta with a cry that shatters windows and eardrums. Delta kills one of the scouts and the group evacuates.

Gavrok lands in a field but comes up empty: The Doctor ditched the homing beacon to lead them astray. The surviving scout leads Gavrok’s army to the abandoned farm as the Doctor’s group arrives at the TARDIS. The Doctor hides everyone at the camp while he works on disarming the sonic trap, and the Bannermen stumble into a bee swarm trap.

Delta finds Billy eating the growth jelly in an attempt to become a Chimeron and leave with her. As the Bannermen arrive, the Doctor and Billy install a speaker on the roof, using it to transmit the child’s sonic alarm across the camp and disable the army. Gavrok stumbles in pain and falls into the sonic cone, dying instantly. The CIA agents restrain the rest of the Bannermen and the threat is over.

Billy packs a bag, now fully transformed into a Chimeron, and the trio flies off into the cosmos. Billy leaves his prize motorcycle with Ray, the Doctor receives a jar of 1928 hibiscus honey as a parting gift, the Americans find their satellite, and our travelers depart for their next adventure.

The positives outweigh the negatives in this story. We have the debut of the Seventh Doctor’s trademark question mark umbrella. We also have a very pleasant atmosphere of authenticity with the vintage music. Series composer Keff McCulloch did a wonderful job with twelve covers of era songs.

On the downside, the humor and light tone served double duty: It was a nice change but I found it to be a bit too much, throwing off the pacing just enough that the transitions from action to comedy and back were jarring instead of fluid. We also have the oddness with Billy stealing the super jelly and changing species on a whim, which made zero sense neither in the story nor against Delta’s character specifically.

All of that balances out to a high three, which gets rounded up.

UP NEXT – Doctor Who: Dragonfire

4 thoughts on “Timestamp #150: Delta and the Bannermen”