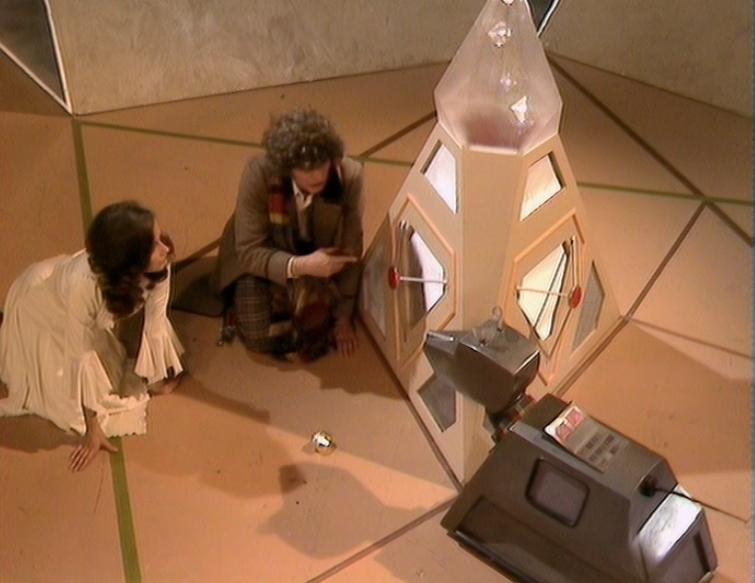 The end to the Key to Time arc begins with melodrama in a hospital.

The target for the sixth and final segment of the Key to Time is Atrios, the twin planet to Zeos, which are engaged with each other in a brutal nuclear war. Princess Astra, the leader of Atrios in name only, is appalled at the carnage and the conditions for her people. She is also disturbed by the actions of the Marshal, who holds all of the power because of the hostilities. The Marshal confesses to his aide-de-camp Shapp that they are actually losing the war and is searching for any way to win, and the Marshal leads the princess into a trap. To silence her, perhaps? Or is it something more?

The TARDIS arrives in parking orbit around Atrios, but the Time Lords determine that they are way off course. They take the TARDIS in manually, which provokes the Atrians to launch a nuclear missile to intercept. The TARDIS de-materializes moments before impact to confuse the Atrians, then arrives on the planet.

The Marshal is also communicating with an unseen entity. Are we finally coming to the Black Guardian?

Since the planet is engaged in nuclear war, the Time Lords decide to move quickly. They track the fragment to the room holding Princess Astra, but are soon ambushed by the Marshal. He leads them away as another bombardment buries the TARDIS in rubble. K9 takes the opportunity to hide.

The Marshal declares the Time Lords, along with Merak (the princess’s sort of secret lover), as spies against the government. The Doctor tricks the Marshal into summoning K9, who provides a distraction for Time Lords to escape. The return to the landing site only to discover that the TARDIS is buried, and unbeknownst to them, the princess has been transmatted away by a mysterious masked figure.

Merak follows the Time Lords, and together they breach the room where Astra was being kept. Due to the high radiation, the humanoids leave K9 to stand guard while they continue the investigation. The Marshal uses the opportunity to lure K9 into the recycling complex. He also sends guards to retrieve the trio and bring them back to the command center, intending to treat them as guests. The Marshal asks the Doctor to help Atrios win the war, and he suggests a shield to block Zeons from attacking. The Marshal demands a weapon instead, intent on destroying the enemy. The Doctor says that he’ll need K9 and the Marshal reveals the robotic dog’s fate. The Doctor rushes to the recycling complex and rescues K9 at the last second. In the confusion, the Marshal reveals a small device attached to his neck. Romana tells the Doctor of this device later on as they brainstorm a solution. The Doctor deduces that something is blocking Zeos from Atrios, and the Doctor proposes going to Zeos to investigate.

Princess Astra appears on a transmission from Zeos demanding an Atrian surrender, and the Marshal sends the Doctor to a transmat for transport. Romana and Merak sneak into the room behind the Marshal’s mirror and discover a stone skull and the Marshal’s plot to trap the Doctor. As they arrive with the information, the trap is sprung, and the Doctor is transmatted away with two masked men.

The entity controlling the Marshal ends the Zeon attacks on Atrios, leaving the Marshal open to any course he chooses. Meanwhile, the Doctor is brought before the entity, the Shadow, who reveals that he has the TARDIS. The Shadow demands that the Doctor open the TARDIS and retrieve the segments to the Key to Time. Meanwhile, Romana and Merak discover that the TARDIS is missing, and then decide to follow the Doctor. Merak tricks Romana into surrendering the Key Core before transmatting away.

The Shadow leaves the Doctor, confident that the Time Lord will eventually make a mistake that will lead to the other fragments. The Doctor begins to search for the final segment while the Shadow interrogates Princess Astra. The Shadow reveals Astra is on his ship while Merak is on Zeos. Romana and K9 follow to Zeos, as does the Marshal’s aide Shapp. Shapp finds the Doctor and is convinced to follow K9’s tracks to the rest of the group. K9 has been communicating with the Zeon commander, which is actually a supercomputer named Mentalis. The computer has been instructed to conceal all information about Princess Astra, but reveals that the war is over and obliteration of everything is the next step.

The Marshal launches a plan to destroy Zeos with a missile assault. The computer cannot counterattack since it believes that it has won. If the computer is destroyed, it will implement the Armageddon Factor and destroy both planets. The Time Lords set to work in reprogramming Mentalis, but this triggers the computer to start a self-destruct sequence. Meanwhile, Romana deduces that the Shadow is located on a third planet in the star system. With the self-destruct clock still ticking the Time Lords seek refuge in the TARDIS.

The Shadow returns to Astra and fits her with a control device. He forces her to project an image of herself to distract Merak, and Shapp is stunned by one of the Shadow’s henchmen and transmatted away. Merak ends up falling down a hole after chasing the apparition.

The Doctor and Romana attempt to construct the Key to Time, but without the remaining fragment the artifact is useless. The Doctor constructs an artificial piece to fill the gap which places the Marshall’s ship in a time loop and prevents him from attacking. Since the one segment is artificial, the time loop is steadily degrading.

The real Astra (under the Shadow’s control) rescues Marek. The pair run into K9 and the dog fights off the henchmen as the pair head to the TARDIS. The villains lure K9 into the transmat with a distress call and the pooch is beamed away to the Shadow’s ship where he is reprogrammed. Meanwhile, Astra reveals her allegiances to Marek and he is beamed away as she tries to fool the Doctor. She gains access to the TARDIS and accompanies the Time Lords to the Shadow’s location.

K9, now working for the Shadow, goes to greet the trio. Inside the TARDIS, Astra is directed by the Shadow to take Romana to him. The Doctor finds the distress signal that trapped K9 and follows it, plagued the entire trip by illusions of Romana, Astra, and himself. He eventually confronts the Shadow, who reveals that he is the agent of the Black Guardian, and is captured.

In his cell, the Doctor encounters another Time Lord named Drax (who refers to him as Theta Sigma – that can’t be his real name, can it?). Drax was forced under threat of death to build Mentalis. He has since been trying to tunnel out and find a way to his own TARDIS on Zeos. The Doctor determines if Drax is trustworthy as the Shadow tortures Romana for information. After gaining everything he can from her, the Shadow sends K9 after the Doctor. The Doctor tricks K9 into the cell with Drax where the threat is stopped. The Doctor makes his way out to the upper levels and is captured by a henchman and taken to the Shadow. There, the Doctor is forced to retrieve the Key to Time so the Shadow can add the Sixth Fragment and set the cosmos at war. When he reaches the TARDIS with his henchman escort, the Doctor is surprised by Drax’s arrival. Drax shoots him with a shrink ray, miniaturizing both of the Time Lords. Since the TARDIS doors are open and the time loop is crumbling as the artificial Key Fragment is burning up, they decide to create a distraction.

The Shadow leaves to retrieve the Key, and Romana discovers that Princess Astra is the Sixth Fragment. The Doctor and Drax fix K9 and hitch a ride to the wall outside the Shadow’s chambers. After Merak transmats back to the Shadow’s ship, he joins the group in the chamber where Astra is transformed into the fragment. As K9 blasts in and the Time Lords are restored to normal size, the Doctor retrieves the Key and takes Romana back to the TARDIS. They travel to the computer room where Drax – who rescued K9 – helps them disarm Mentalis. Free of the time loop, the Marshal fires on Zeos, but his missiles are deflected into the Shadow’s ship.

Drax leaves to find his next construction job and the Doctor is briefly enthralled by the power of the Key. As the Shadow dies, the Black Guardian disguises himself as the White Guardian and attempts to trick the Doctor into surrendering the Key. The Black Guardian callously disregards Princess Astra’s sacrifice, and the Doctor figures out who the Guardian truly is. The Doctor disperses the Key Fragments across the universe, thus reuniting the restored Princess Astra with Marek, at the same moment as the TARDIS dematerializes.

To prevent the Black Guardian from following and seeking revenge, the Doctor has installed a randomizer on the TARDIS. Not even the Doctor knows where they are going next.

The ending is iffy. If the White Guardian had successfully restored the balance between good and evil throughout time, then the show would theoretically be over since it relies on the Doctor battling evil. But the dispersal of the key feels like it invalidates the entire journey to assemble it. It’s a hollow victory capped by a last-minute convenience. It’s almost as if the writers had no idea how to put a lid on this whole season’s story.

That said, this episode was mostly solid. Mostly.

UP NEXT – Sixteenth Series Summary

8 thoughts on “Timestamp #103: The Armageddon Factor”

First thought: Then how do I access the contents? 😉
I got around a bit over Labor Day weekend.
Ralphth the Dragon, Jr. watched his "favorite" human defend Tremors 2 to the @scificlassictrack.