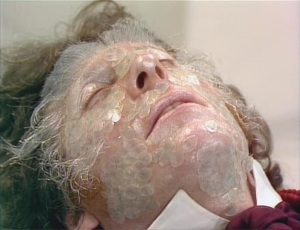 If only that bored shuttle pilot had checked his Facebook feed instead.

While flying through an asteroid field, the duty pilot excises his boredom by shifting control to manual. Per the status quo on Doctor Who, things go awry as the ship is drawn into an anomaly and struck by an energy field.  The crew regains control and heads to Titan, where they take up arms and slaughter the shuttle’s relief team. The murderous crew has been infected by something, and they set their sights on the Lowe, the station commander. The commander discovers what has happened and sends a distress call before abandoning the station for the surface of Titan.

On the TARDIS, it’s moving day as the Doctor and Leela reoccupy the (improved) main console room. The Doctor complains about the color – He’s never happy with the décor, is he? – before the TARDIS stops in deep space near Titan. The Doctor intercepts the distress call and sets a course to help. They pass through the same anomaly and the Doctor is struck by the energy field just as Leela’s sixth sense kicks into overdrive. The Doctor collapses, the TARDIS arrives on the station, and the energy field attempts to infect Leela, but fails. The Doctor wakes up, but is severely disoriented, and Leela prevents him from leaving the TARDIS.

The station commander returns and kills one of the infected crew before running for cover. The surviving invaders lock him in the room and cut off the air supply. The Doctor and Leela leave the TARDIS and explore the station, and as the Doctor encounters the invaders, they mention that he is the nucleus of their new hive, and that pushes him into a possessed state. He and one of the invaders start searching for Leela.

Leela finds Lowe and helps him recover from his hypothermia in the station mess. The Doctor locates them, and one of the invaders rushes in to kill Leela. The commander tries to stop him and fails, but Leela kills him with her knife. As she rushes out, the dying invader infects Lowe. Meanwhile, Leela is nearly ambushed by the Doctor, but the Doctor forces the infection to recede before inducing a healing coma (just like he did three times before).

Leela find Lowe, who dons a set of goggles to disguise his infection and trick Leela into trusting him, and asks for help. The Doctor provides the coordinates for a medical center, and Leela (somehow) pilots the TARDIS there with the Doctor and the commander. The medical team there checks the Doctor in, gets vital information from Leela, and sends the commander to the optometrist.

I did enjoy the funny bit about Gallifrey being in Ireland.

The specialist diagnosing the Doctor, Professor Marius, only gets interested in the case when his robotic assistant reveals that the Doctor is an alien.

Welcome to the party, K9!

The diagnostic team discover the virus and the Doctor wakes up to discuss the case. They determine that the virus feeds on intellectual activity, and that Leela is immune because she operates on instinct and intuition. Meanwhile, in the optical department, Lowe infects his doctor and the pair start spreading the virus around the medical station. Leela tracks down the Doctor, but she is warned off by K9. Marius arrives and tells K9 (whom Marius constructed to replace the dog he left behind on Earth) that Leela is a friend. They examine Leela for an immunity factor, but none is present. Marius begins to operate on the Doctor’s brain, which prompts the virus to crash a shuttle into the medical center. The crash awakens the Doctor and the infected crew assault the operating theater. Marius sends K9 into battle as the Doctor asks him to clone both of the travelers. The clones are effectively photocopies, with all of the experiences and knowledge of the host, that will degrade and expire in short order. The Doctor-clone uses technology from the TARDIS to miniaturize the clones and send them into the Doctor’s body.

The Doctor’s innerspace is a blue-screen wonderland. As they cloned travelers explore, Leela and K9 barricade the operating theater. They face off against the invaders, but K9 is infected. K9 tries to kill Leela, but she dodges and is only stunned, and the cyber-dog reboots himself to eradicate the virus. The invaders storm the operating theater, killing a medic and infecting Marius. A nurse escapes as Marius explains the situation to Lowe and finds K9 and Leela. Meanwhile, Lowe gets cloned and injected into the Doctor.

The Doctor-clone locates the virus nucleus, which tells its story as the Leela-clone eliminates the Lowe-clone. The nucleus stalls for time and, as the clones degrade, it escapes through a tear duct and is enlarged by Marius. It now has control over the macro-world, but allows the Doctor to heal.

Leela disguises herself as a nurse and rescues the Doctor as the infected escort the nucleus to Titan. They take refuge in the TARDIS, which is unable to travel since the dimensional stabilizer is still in the operating theater. K9 goes out and stuns Marius, and the whole group heads off for diagnosis. Leela left some kind of antibody in the Doctor, and he isolates it to create a cure for Marius. The medical team starts mass-producing the cure.

With the cure in hand, the Doctor, Leela, and K9 head for Titan. The infected are developing a resistance to the blaster weapons, and K9’s energy levels are low. The team sneaks in, with K9 drawing the infected away as the Doctor confronts Lowe at the hatching chamber. K9 uses the last of his energy to shoot Lowe, and the infected man falls into the swarm. Having lost the antidote in the battle, the Doctor rigs the fuel tanks to explode as Leela carts K9 back to the TARDIS. The Doctor runs back to the TARDIS, nearly forgetting Leela and K9 before collecting them and escaping just before the base explodes.

It’s really odd to see the Doctor celebrating so much about the destruction.

As the travelers wrap up their loose ends at the medical station, Marius tells them that he is headed back to Earth and that they should take K9. The dog joins the team, and the TARDIS whisks them away.

I was entertained for the most part by this one. It moved pretty quickly, and played with some wacky scientific ideas and the ever-popular epidemic tropes. Plus, K9.

UP NEXT – Doctor Who: Image of the Fendahl

4 thoughts on “Timestamp #93: The Invisible Enemy”

Sleepy pretzel dog.
Snuggle time.
From my family to yours, we hope you have a happy new year.