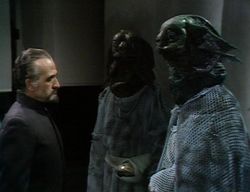 The Master returns to Doctor Who, scheming and plotting from his island prison cell. The Doctor and Jo pay him a visit, and the Master claims to be rehabilitated, but he refuses to reveal where he parked his TARDIS, so the Doctor is skeptical.

Adding to the Doctor’s uneasy feeling is a recent rash of ship sinkings in the area and Colonel Trenchard, the very odd prison warden who (unbeknownst to the Doctor) is working with the Master to defeat some unknown enemy agents. The Doctor goes to the nearby naval base and enlists the help of the base commander. He and Jo head to the nearby sea fort to investigate, but are stranded as the Sea Devils destroy their boat. The Sea Devils give chase inside the fort, where the Doctor and Jo find a single half-mad survivor before calling for help and escaping.

According to the Doctor, these Sea Devils are related to the Silurians: They are adapted to living underwater, and they share the same motivations as their cave-dwelling cousins.

Trenchard sets the Master free, and he goes to the naval base in the guise of a Navy commander. He steals some sonar equipment, assaults a Chief Petty Officer, and escapes after being spotted by Jo. When the Doctor and Jo return to the prison, the Master is back in his cell as if nothing ever happened. The Doctor sends Jo to inform UNIT as the Master escapes and a random swordfight breaks out. Trenchard arrests the Doctor, and the Master explains his evil plan to take over the world with the Sea Devils.

Meanwhile, the Sea Devils take over a rather spacious submarine. Who knows why at this point, but they do.

Take a moment here to breathe as the secret service Sea Devils take their luxury submarine somewhere. Who knows where are this point, but they do.

The Doctor and Jo go back to the naval base, and the Doctor takes a diving bell to the foundation of the sea fort to investigate. The Sea Devils abduct him and take him to their leader, with whom the Doctor almost brokers peace, but is interrupted by the arrival the Master. Further complicating matters are Parliamentary Private Secretary Walker, a sexist, pompous, arrogant ass who arrives to “solve” the missing ship problem with his depth charges.

The Doctor escapes from the sea devils, rescues the submarine crew, and they all break free from the underwater base in a moment of okay, sure that had me setting aside my background in undersea warfare. At least they wrapped up the dangling plot thread about that stolen sub. Not to be dissuaded, the Master and the Sea Devils take over the naval base, and the Master tries to convince the Doctor to help him revive all of the Sea Devils around the world. The Doctor sabotages the machine, which incapacitates the Sea Devils so the sailors can escape. The Doctor fixes the “mistake” just as the sailors stage an assault to retake the island, but the Master runs with the machine and the Doctor gives chase. They end up back in the waiting fins of the Sea Devils, who are now tired of all of these Time Lord shenanigans. The Doctor sabotages the machine by reversing the polarity of the neutron flow (huzzah!), which creates a bomb that the Master unknowingly activates. The Doctor uses his sonic screwdriver to open the cell, and he and the Master escape. The Sea Devil base explodes, but the Master works his mental magic to escape in a hovercraft.

All of that in six episodes, which normally poses a problem for me, but this story was so well paced that it didn’t matter. Each thirty-minute block just flew by.

Despite the pace, there were a couple of down notes. First, the third episode must have been a bit short since they repeated the whole swordfight from the previous episode. It wouldn’t have been a problem if I wasn’t watching these in rapid succession, but when the episodes are back-to-back, long repeated story points shred the pacing. Second, it’s becoming standard operating procedure for the Master that his eyes are too big for his metaphorical stomach. His plans always double back on him, usually because he’s trying to wield too much power. Don’t get me wrong, it makes sense with the megalomaniacal bag full of cats that is the Master, but it’s become predictable. Especially after an entire season of stories with that common thread.

On the plus side: First, the writers did their homework with all of the naval trappings. Even though the submarine was the standard Hollywood-style hotel underwater, it was still okay with me in practice. Second, Roger Delgado is deliciously evil and melodramatic in this serial, and while Series Eight was decent with his portrayals, for some reason this serial really worked for me. Last, I loved how the Doctor used the sonic screwdriver as a tool to navigate the minefield, set off one of the charges to scare the Sea Devil, and escape from a jail cell. The prop also has a totally ’70s sci-fi vibe, and I adore it.

This fast-paced and fairly tightly written serial shook out to a high 4 when I was done, and I have no problem rounding that up.

UP NEXT – Doctor Who: The Mutants

After his operation on Bespin fell through, General Calrissian turned his attention to vineyards.
An artifact from a previous decade.
Day 24: Darth Vader in an "ugly" Christmas sweater