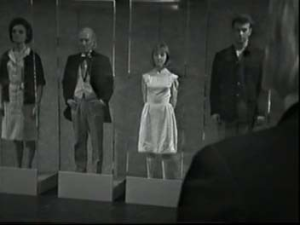 I enjoyed that this serial had a mystery that both the crew and the audience need to figure out. The second episode started into the background, but the first episode effectively roped me in with the question of what was going on.

There were some great moments in this serial. The Doctor gives the admonition to stay close, but then it’s the Doctor who lags behind gets taken by the rebels. Later he hides in a Dalek shell, and his Yoda-like mirth made me laugh. It was really nice to have him fool the mind-reading chair, and an equally nice touch to have the “curator” get rid of him once he’s of no further use. The typical sci-fi tropes would have had the baddie just stick the hero away instead of trying to kill him off.

The action scenes during the whole cat-and-mouse chase were engaging, and Vicki is brilliant in rewiring the armory computer. She’s really climbing the ranks as one of my favorite companions.

The thing that made me scratch my head was that this was apparently all started with yet another faulty component. It seems that the TARDIS is often just one bump short of falling apart at the seams.

Last but not least, there were new Daleks in the lead-in to The Chase. Unfortunately, the head light blinking sequences are way off, and I don’t like the super-shiny collar. It’s very distracting under the studio lights.

UP NEXT – Doctor Who: The Chase

3 thoughts on “Timestamp #15: The Space Museum”

Pythagoras was our co-pilot for part of the day. Some people say that they'll never use geometry and algebra outside of school, but we two math nerds were crunching numbers over a miter saw to build four of these.
I got a few morning snuggles from @the.char.char.binks before getting back to work.
The clover is going bananas.