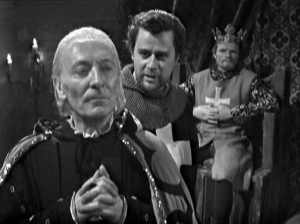 It’s Julian Glover! General Maximillian Veers, Walter Donovan, and Aris Kristatos! Instead of an Imperial soldier, a Nazi, or a Soviet sympathizer, this time he’s a rather petulant King Richard the Lionheart.

Ian gets to use some of the swordfighting skills he’s learned over the last couple of years, and he gets knighted as well. The Doctor gets to display his interesting morals (once stolen clothes are fair to be stolen again), and displays a couple of character traits I’m glad have survived into the modern era (he does not suffer fools and cherishes bravery). The Doctor and Vicki really do have an adorable relationship, but the whole ruse of disguising Vicki as a boy is quite a stretch, especially given the rather conspicuous curves and facial features.

This was a simple story, but engaging and entertaining. The second and fourth episodes I watched were reconstructed from recorded soundtracks and screen caps.

UP NEXT – Doctor Who: The Space Museum