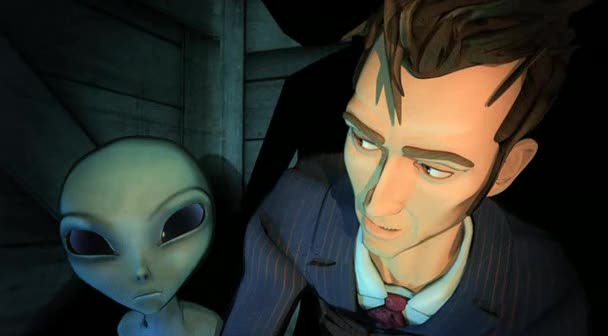 “Always count your steps, Seruba Velak. You never know when you might need to escape in a box.”

One ship is pursued across the sky by two others. In a hail of laser fire, it crashes into the New Mexico desert, outside Roswell, on June 13, 1947.

Eleven years later, the Doctor arrives at a diner in Dry Springs, Nevada. He meets Cassie Rice, a customer named Jimmy, and a mysterious artifact that lights up under sonic screwdriver. While Cassie and Jimmy marvel over the technology, a man in a black suit arrives and demands it. He assaults them for it, and they make haste for the ranch where Jimmy works.

When they arrive, they find a large Viperox battle drone which has been eating the cattle. A helicopter arrives with soldiers on board, and after they blow up the Viperox, they tell the Doctor that he’s wanted at Area 51.

Accompanied by Jimmy and Cassie, the Doctor is taken below ground to meet Colonel Stark. He tells them that he plans to wipe their minds, straps them to some operating tables, taunts them for a few minutes, and turns on the amnesia gas. The Doctor wriggles free, turns off the gas, and helps his companions escape through the ventilation shafts.

As alarms echo through the facility, the trio takes flight, ending up in Lab 51. Inside the lab, they discover an alien behind a glass partition. Force to run again, the team takes a lift to a hangar where they are immediately captured.

The Doctor’s entourage are shepherded toward the alien craft that crashed in Roswell. Using his sonic screwdriver, the Doctor hijacks the ship and takes it for a spin. Pursued by Air Force fighters, he crashes the ship in the desert. They take refuge in a ghost town called Solitude.

Meanwhile, Colonel Stark is confronted by a Viperox named Lord Azlok, demanding that he not disappoint the Viperox forces. Azlok is also very interested in the Doctor and his skills.

The Doctor and his companions find a Viperox that pulls Jimmy underground. Lord Azlok interrogates Jimmy and meets the Doctor, whom he pegs as an alien because of his two heartbeats. Cassie frees Jimmy and stages a diversion, and although the Doctor is upset that he didn’t figure out the master plan, they discover it soon enough. Lord Azlok brought the Viperox Queen to Earth, and she’s laying eggs Aliens-style to hatch an invasion force.

The trio runs again, this time taking an Indiana Jones and the Temple of Doom mining cart ride into the blinding desert. There, they meet four men in black suits. The head Man in Black, Mr. Dread, demands the the ionic fusion bar from the diner. When the Doctor stalls, the MiBs reveal themselves as robots. They are saved by Jimmy’s grandfather, Night Eagle, and a hail of arrows.

Night Eagle reveals that he found another of the gray aliens from the crashed ship and kept him safe. Rivesh Mantilax wants to go home, but first he needs to find Seruba Velak, his wife and the alien in the base. His wife was an ambassador who was trying to build an alliance against the Viperox, but was attacked by hired mercenaries.

Colonel Stark arrives and takes everyone into custody. Back at Area 51, the Doctor discovers that Stark has allied with Azlok. They watch as the gray aliens are reunited, then discuss how Rivesh was developing a genetic weapon to destroy the Viperox. Joined by Mr. Dread, Stark reveals his plan to use the ionic fusion bar as a weapon to destroy the Soviet Union.

The Doctor uses his sonic screwdriver to disable Mr. Dread, then runs to the roof with the alien weapon. On the edge of the roof, held at gunpoint by Stark, the Doctor pleads for the colonel’s help. Stark listens to reason, but his plan to arrest Azlok is interrupted by the Viperox leader himself and the promise to tear Earth to shreds.

Down below, Cassie finds Rivesh has been critically injured by Azlok. Once freed, Seruba says that she can save her husband, but only with her ship. Stark takes the group to the Area 51 Vault where all of the ship’s contents were stored in the final scene of Raiders of the Lost Ark. While the Doctor and Seruba start searching, he sends Cassie and Jimmy to retrieve the TARDIS.

As the sun sets, the Viperox emerge from the desert and start their rampage while Seruba finds the component and the Doctor finds a swarm of hungry Skorpius Flies.

Stark deploys his army against the Viperox while Seruba and the Doctor play hide-and-go-seek with the flies. The army is no match for the invasion, and as Stark’s operations center is overrun by Azlok, the Doctor is reunited with the TARDIS. Jimmy, Cassie, and Seruba step aboard and they travel to Rivesh’s side. Once Rivesh is revived, the Doctor asks him to activate the device but to stop before destroying the Viperox. The Doctor connects the device into the TARDIS console and it broadcasts a signal that drives the Viperox off the planet entirely.

The Doctor let them live because, one day, they are destined to evolve into something better.

The Doctor entrusts the device to Colonel Stark for the protection of Earth. They bid farewell to Seruba and Rivesh, and the Doctor takes off as Cassie and Jimmy hold hands.

Admittedly, it is a function of its form, but this story moved like a squirrel binging energy drinks. This piece was originally planned as seven six-minute episodes for the BBC’s Red Button service. As a result, we got a story that has a plot climax every five or six minutes.

It was kind of tiring.

I could point out the technical inaccuracies, but the fact that this was a cartoon developed for a charity event gives the writers a considerable amount of grace in my eyes. Some of the errors are animation shortcuts, others concern United States history, but overall they are inconsequential to the plot on the whole.

So, I’ll revel in the character and cast lists.

Like, the return of Georgia Moffett – daughter of Peter Davison and wife of David Tennant – who we last heard (and saw) in The Doctor’s Daughter and who I really enjoy seeing/hearing on the show.

Or the first Native American companion (however briefly) in Doctor Who, Jimmy Stalkingwolf, portrayed by Canadian born English actor and singer Tim Howar. It would have been nice to a Native American actor in either this role or Night Eagle’s role, but I’ll take this advancement as progress. I mean, we’ve come quite the distance from An Unearthly Child when the First Doctor referred to “Red Indians” as having “savage minds”.

Or… How about Doctor Who getting David Warner as Lord Azlok. Emmy-award winning film, television, and theatre actor David Warner from The Omen, Time After Time, Time Bandits, Tron, Titanic, Star Trek V: The Final Frontier, Star Trek VI: The Undiscovered Country, Star Trek: The Next Generation, and so much more.

Of course, we first heard of Dreamland from Prisoner of the Judoon, which is where we first saw the ship designs seen in this tale. We get plenty of continuity from the Doctor abhorring salutes (previously The Sontaran Stratagem and Planet of the Dead) and outright despising the nickname “Doc” (referencing The Time Meddler, The Five Doctors, The Twin Dilemma, The Ultimate Foe, and more I’m sure).

I also enjoyed seeing Doctor Who outright embrace the Roswell mythos, from the “grays” of typical close encounter accounts to the legendary Men in Black.

But, all of that awesomeness considered, I keep coming back to that over-caffeinated squirrel of story pacing. Like I said, it was tiring, and it really pulled me away from the adventure because I was trying to keep up with what was going on with otherwise thinly developed characters.

And that is truly a shame for a tale with so many other groundbreaking elements.

Rating: 3/5 – “Reverse the polarity of the neutron flow.

UP NEXT – Doctor Who: The End of Time