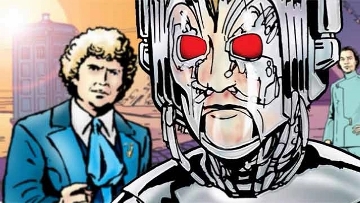 After a brief reprise of the Third Doctor‘s opening credits, we are reintroduced to the Cybermen as they search the rooms surrounding a large ball called the Chronosphere. Two humans emerge after the patrols pass and send a “doctor” (who was connected inside the sphere) to the past, potentially destroying their timeline.

On a starship called the Cassius, an officer named Kruger talks to Professor Osborne on the state of the planet below. Two teams have disappeared in two days, but their disappearance has stymied the search teams. During the debrief, the professor and his team are engulfed by a wave of temporal energy and disappear, exactly on schedule with the last two events. They also witness a Cyberman as they vanish.

On the planet, the TARDIS overlooks a camp and pyramid-shaped temple. Evelyn Smythe and a third survey team are digging into the mystery with the help of the Doctor (as requested by the authority called Central) because of the Cyberman sighting. Evelyn and Doctor Reece Goddard discuss the Doctor before settling in for a chat about the history of Cybermen.

Inside the temple, the survey team and the Doctor are studying the hieroglyphs printed on the walls of a large chamber. This version of the Sixth Doctor is more conservatively dressed and far less pompous, and he helps the team unlock a few secrets of the building’s architecture. Together, they decide to open a sealed door and examine the wall beyond. The team leader, Nicola Savage, is adamant and eager to find her missing colleagues, but the Doctor and the rest of the team are hesitant and cautious. As they argue, the door opens on its own accord and exposes an extra-dimensional space beyond. The Doctor warns the team not to mess with the membrane covering the entrance, but the scientists don’t listen and they Savage is pulled through. After the lights go out, half-converted Cybermen (including Savage) emerge and threaten to assimilate the rest of the team.

Evelyn and the administrative team in the camp muse about the subcutaneous bio-trackers that keep tabs on everyone on the survey team – except Evelyn, the Doctor, and the allergic Goddard – and how Savage’s signal has blipped off then on. Their discussion and debate are interrupted by the Doctor and the partial Cybermen. The Cybermen cannot recognize the Doctor in his sixth form until Evelyn inadvertently reveals him, and they demand that he follow them into the portal to meet the Cyber Controller and turn over the TARDIS. The portal itself leads to the Chronosphere chamber from the story’s opening.

The Doctor puzzles over Cyber Savage’s ultimatum: She plans to kill the survey team if the Doctor doesn’t comply, but the Doctor notes that the threat is impotent since he sees a handful of lives as insignificant against the survival of the universe. He also deduces that the Cyber Controller didn’t build the temple, but instead is using it after the previous occupants have long since gone.

Cyber Savage reveals a critical key to the audience: The Cyber Controller is interested in an heir to its power, and the Doctor (along with his knowledge of time travel) is the perfect candidate. That’s an interesting idea. Anyway, Administrator Isherwood offers to betray the Doctor by making a duplicate key, and the Cybermen agree with the plan. The Doctor doesn’t think it will work, and he confirms it by watching the Cybermen struggle with basic logic as they try to carry the TARDIS into the temple. They are usually more intuitive than that.

After consulting with the Cyber Controller, Cyber Savage provides the Doctor with the history of the situation and a demand to provide sanctuary from the impending temporal wave inside the TARDIS. The Doctor also figures out the plan to assimilate him and travel back to the origins of the temple. The Doctor confronts Isherwood over his plans for the TARDIS, then develops a plan to prevent the Cyber Controller from communicating with Cyber Savage. Evelyn and Goddard enter the ruins with scientist Carey, but there are two problems: First, Carey has an implant so he can be tracked; Second, Evelyn has potential knowledge of TARDIS operation. The Doctor has no choice but to go after them, but the Cybermen catch them first and take them to the Cyber Controller. Carey is assimilated in a most gruesome fashion, and Evelyn is faced with a future as the new Controller.

Meanwhile, Goddard confronts Isherwood and his plan to take time travel for his own uses. On the other side of the portal, Evelyn discusses empathy with the Cyber Controller and makes some headway through logic and reason.

The Doctor figures out Cyber Savage’s deception before she succeeds in securing the TARDIS, and the Time Lord uses the distraction to confront Goddard. The Cybermen have ignored him so far, and the Doctor wants to know why. Goddard is a Cyberman from the future (sort of), and his technology is based on Time Lord knowledge, which the Doctor will inevitably yield.

In 1927, the Cybermen unleashed a virus on Earth that transformed humans into cybernetic hybrids. Goddard was one of the few who survived and joined a rebellion to reclaim the planet, and his research has brought him to this point. The ability to travel in time has allowed the Cybermen to completely conquer the universe and Goddard (who was the doctor in the time sphere) us trying to stop the origins of the Cyber-verse using a counter-virus.

The downside: This creates a time paradox.

The Doctor tries to stop Goddard, but the hybrid knocks him out. The scientists see this happen, but Cyber Savage cannot see Goddard. Unable to explain the event, Cyber Savage kills Renchard while torturing him for the truth and then takes Isherwood to the portal. Goddard and the Doctor follow, but the Doctor is ambushed by a Cyberman. Goddard kills it with the counter-virus and they proceed, but the transition through the portal destroys most of the counter-virus. Once through the portal, the Doctor makes a few changes to the hieroglyphs.

I love the point/counterpoint of the clashing moralities between the Doctor and Goddard.

As Evelyn’s assimilation begins, the Cyber Controller demonstrates to Ishwerwood how the portal negatively affects the organics under the cyber armor. The Controller finds the Doctor and begins to reason out the existence of Goddard, and a slip of the tongue from Isherwood leads to a change in the Cyberman algorithms, making the young scientist is visible to the enemy. The Cyber Controller finds the virus and questions the Doctor’s morality around it, calling back to Article Seven of the Time Lord Constitution and the laws against genocide.

In the assimilation chamber, Evelyn’s transformation stops as the overseeing Cyberman has a human epiphany of emotions. After the Cyberman leaves, the Cyber Controller notes the irregularity and reactivates the chamber. The Cyberman engages Cyber Savage, and the Doctor and Goddard use the distraction to gain the upper hand. Goddard kills Cyber Savage, then delivers a coup de grâce to Isherwood as the former administrator shares a secret with him.

The Doctor finds Evelyn and frees her from the conversion chamber, but Goddard arrives and reveals the secret: Evelyn is carrying the original virus, engineered from the counter-virus and completing the paradox that the Doctor warned of. Goddard defeats the Cyber Controller and opens the faceplate, revealing Evelyn’s face beneath as the being dies and the temporal wave washes over them both.

The Doctor and Evelyn reach the TARDIS, the former unaware of the terrible burden the latter carries. Evelyn is weary and a deeply respectful Doctor takes care of her as he sets course for a cliffhanger: The TARDIS hurtles toward Charles Lindbergh‘s historic flight in 1927 and the birth of the Cyber-verse.

This was a decent story with some great twists, and it operated almost like the reconstructions of the First and Second Doctor‘s eras. The downsides are numerous, including far too many close-ups on random bits, such as the cat brooch (which emotes as the Doctor does) and Cyber Savage’s cyber-crotch. It was also far gorier than previous stories and maintained the Fifth and Sixth Doctor era tradition of large body counts.

That said, the big positive is a better representation of the Sixth Doctor himself. This Doctor shucked the cynicism and abusive attitude while maintaining his standoffishness. He has really grown up, and I would have liked to see this Doctor for a season on the actual show.

Next up, our journeys with the Sixth Doctor come to a close with another non-canon tale.

UP NEXT – Doctor Who: A Fix with Sontarans

I spoke up for Primary season. Did you? #vote
Tonight's adventure was to Graves Park. It's a fun little family place with a mixed use perimeter path and an interactive fountain for the kids to splash in.
Tonight's adventure with @searose.f and the boys was at Caney Creek Preserve. It has an interesting dichotomy between wide open spaces and dense forest, and it's littered with educational signage. A beautiful and quiet place to be sure.