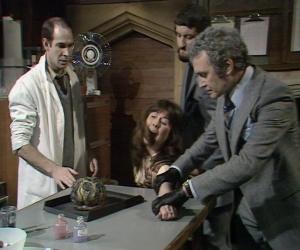 Doctor Who meets The Thing? Maybe, when The Thing was Who Goes There?, The Thing from Another World, or even Horror Express.

A science team is digging up a strange artifact which turns out to be a 20,000 year-old lifeform. Meanwhile, back in London – they made it! – Richard Dunbar shows the Doctor photographs of the seed pod. The Doctor worries that it may be a time bomb ready to explode, and he books the next flight with UNIT for the Antarctic.

The videography looks much nicer this time around with the outdoor sequences being filmed on videotape.

The Antarctic science team fears that the Doctor will know nothing about their studies and continues to experiment on the pod as Dunbar visits millionaire Harrison Chase, a man who is on a mission to protect plant life worldwide. Dunbar sells the information to Chase, who then sends his own a representative to the Antarctic.

The pod awakens and stings Winlett, one of the scientists who is working alone –  that’s never a good thing to be in a horror film –  and he is assimilated by the pod. The Doctor arrives and examines Winlett. The scientist’s pulse rate and body temperature are dropping. The Doctor believes that the infection is a complete mutation into a plant form. His worst fears are confirmed when he examines the pod: It will likely result in the destruction of all life on the planet. The Doctor seeks out a second pod since they travel in pairs, and explains that Winlett is changing into a Krynoid, a form of intergalactic kudzu that consumes animal life wherever it goes.

The sound of engines draws the science team outside, presumably to meet the medical team. Instead, it was a private plane with Chase’s men – Scorby and Keeler – on board. The Doctor suggests that the infection may be slowed at its source by amputating Winlett’s arm. After some deliberation, the group leaves to prepare, and Winlett rises from the bed and kills one of the other scientists. Scorby prepares to assassinate everyone at the base, but Keeler doesn’t like the plan, so Scorby coerces him on threat of death. Sarah Jane discovers Moberly’s body and alerts the Doctor and Stevenson. They go out to search for the Krynoid, and Chase’s men take the opportunity to search for the pod. They intercept a radio message about the medical team and call off the dispatch.

The Doctor’s team track the Krynoid to the generator hut and the experimental fuel cell system, but when they can’t find it, they return to the base under the assumption that it has frozen in the subzero conditions. When the Doctor and Sarah Jane return to the infirmary, they are ambushed by Chase’s men, and the Doctor tells them the story. Chase’s men tie them up and interrogate them, and Stevenson tracks them the bunk room. The remaining scientist tries to stop the antagonists, but his rifle has been sabotaged and he is also taken captive, but not before letting slip that a second pod exists. They find the pod and force Sarah Jane to take them to the generator, leaving the Doctor and Stevenson tied up. The Doctor breaks a lantern uses the glass to cut their bonds.

Some time later, the rest of the base’s crew return from their expedition to South Bend to discover Sarah Jane and the Doctor, the MacReady and Childs of this story (even though neither of them are the alien). Chase’s men return home to the estate with the pod, but Dunbar spoils Chase’s joyous moment by reporting that the Doctor and Sarah Jane are still alive.

The Doctor and Sarah Jane return to London and consult with Dunbar and his boss, Sir Colin Thackeray. They then depart for the Botanic Institute, but the driver takes them to a deserted quarry and tries to assassinate them. They stop the driver and find a painting in the car’s trunk that leads them to Amelia Ducat, one of the world’s leading floral artists. She tells them that the painting was bought by Chase, but that she was never paid.

The Doctor and Sarah Jane sneak into Chase’s estate. After they are discovered, the Doctor suggests that they act natural, which in their case means to run. They are captured and taken before Chase who tells them that they will die, but only after a guided tour of the millionaire’s collection.

After an annoying musical sequence that was obviously filler, Chase is informed that the pod is growing. He orders the execution and departs for the lab. The travelers get the jump on Scorby and escape. The Doctor sends Sarah Jane to inform Sir Colin of the happenings before heading back for the pod, but she is readily captured once again. She is taken to the lab where Chase plans to expose her to the hatching pod.

The Doctor jumps in like an action star, beats down the bad guys, and holds them at gunpoint – to the writing team’s credit, they do acknowledge that the Doctor would never use it, but that the bad guys don’t know that – as he rescues Sarah Jane. Meanwhile, the pod opens and attacks Keeler. Instead of calling for the ambulance, Chase has Keeler taken the estate’s cottage for observation.

As the Doctor returns to the lab, he is captured by Scorby and taken to the compost room. Chase is called away as Amelia Ducat arrives and demands her payment. After she negotiates like a champ, he pays her handsomely, and then leaves to oversee the “recycling” of the Doctor. He has the Doctor loaded into the composter and sets it for an automatic delay.

Oh, come on! You know, you’d get away with all of this if you just killed them straight away instead of playing games. What is this, a James Bond movie?

Meanwhile, Sarah Jane sneaks to the cottage and discovers Keeler. He asks for her help, but she refuses in fear that he could complete his transformation at any moment, and she escapes at the earliest convenience and returns to the main house. She intercepts Ducat and asks her to pass the word of what’s happening at the estate. Amelia informs Sir Colin, but they are delayed by Dunbar who returns to the house to rectify his mistake. He tells Sir Colin to contact UNIT if he doesn’t return in the next half hour.

Sarah Jane rescues the Doctor as the Krynoid finishes transforming and Dunbar confronts Chase. Dunbar tries to leave, but is pursued by Scorby. He runs into the Krynoid, and in true Doctor Who fashion, firearms don’t work against it. The Krynoid kills Dunbar just as the Doctor and Sarah Jane arrive, and the Doctor faces off against the creature with a sword. Scorby and the guards arrive and open fire, prompting them all to run and take shelter in the cottage. The Krynoid offers to let everyone else escape in exchange for the Doctor. Scorby almost agrees, but is convinced to make a firebomb instead.

There is a great performance here by Tom Baker as the Doctor gets absolutely furious, then within seconds shifts back to typical Doctor whimsy.

Sir Colin and Ducat return his office and call UNIT as Scorby throws the bomb and the Doctor runs, making it to a car and driving away. Scorby and Sarah Jane take refuge in the main house. Chase has gone to photograph the Krynoid, and it doesn’t attack him. Instead, he has a transcendent experience and comes to understand the Krynoid’s plans, which he considers beautiful.

The Doctor arrives at Sir Colin’s office and convinces Major Beresford (who is standing in for the Brigadier) to take action as the world’s plants become hostile. The Doctor calls Sarah Jane to tell her the news, but the Krynoid cuts the phone lines. They discover that the plants are becoming violent and confront Chase as he communes with his collection. The collection attacks them, but the Doctor and Sgt. Henderson arrive in the nick of time to douse the attacking plants with an experimental herbicide. Chase escapes as the Doctor frees Sarah Jane and Scorby, but Chase’s butler Hargreaves is dead.

The team takes all of the smaller plants outside, and Chase locks them outside with the towering Krynoid. They are saved by UNIT and an impressive laser cannon. The team returns to the house as UNIT assaults the Krynoid, and the Doctor determines that Chase is possessed by the creature. They take refuge in the laboratory, and Chase ambushes Henderson as the sergeant gathers timber to barricade the windows. As Scorby panics, Chase kills Henderson with the composter. Scorby runs from the laboratory and into a pond where the plants drown him. As the Doctor repairs the loudspeaker system, Sarah Jane searches for Henderson and is captured by Chase.

Major Beresford contacts the Doctor, and the Time Lord reveals that they have about fifteen minutes before the Krynoid spreads its influence across all of England. He convinces the major to order an air strike, then goes in search of Sarah Jane, who is about to be composted. The Doctor rescues her, but is trapped in the machine with Chase. The Doctor escapes just in time as Chase returns to the plants in the messiest way possible.

Trapped by the plants, the Doctor rigs a steam pipe to blow a hole in the foliage, and they escape the house as the Royal Air Force blasts the Krynoid into oblivion.

Later on, the Doctor wraps up loose threads with Sir Colin, and then offers to take Sarah Jane on vacation to Cassiopeia. They take flight in the TARDIS, but land in Antarctica and wonder if they’ve already been there or if they’re yet to arrive. Even though it was obviously staged, I loved that last bit of chemistry between these two actors in this season.

There are some very strong characters in this tale with the exception of Chase, who was shallow and very annoying. This story also capitalizes on coming up within weeks of my first viewing of The Thing, which helped make the Antarctic sequences that much better. Overall, this is a high 3 grade, and I always round up.

UP NEXT – Thirteenth Series Summary