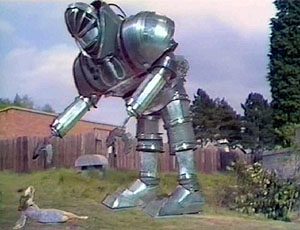 It’s never easy changing Doctors, but I think I’m going to like this one.

Things start out with another new title sequence, which is great, but I kind of miss the warp stars. The story itself kicks off with a delirious Doctor who mentions previous adventures as Lieutenant Harry Sullivan, UNIT’s staff physician, takes the Time Lord to the infirmary. Congratulations are also in order as Benton’s been promoted to Warrant Officer. That’s one big wetting-down party.

As the heroes get sorted out, a robot infiltrates a military facility. It kills a dog, so we know it’s bad, and steals top secret disintegrator gun plans. Back at UNIT, Sarah Jane asks the Brigadier for a pass to tour the Think Tank research facility, and as they leave the lab, the Doctor sneaks in, finds his TARDIS key in his predecessor’s shoe, and almost makes it into the TARDIS before Doc Sullivan catches him.

At this point, we get our first really good look at the Fourth Doctor. His eyes are wild and fun, and so it his youth. He reminds me so much of Christopher Eccleston’s Ninth Doctor.

The Doctor tricks Sullivan and ties him up before trying to leave in the TARDIS, but Sarah Jane stops him and discusses the need for him to investigate the mysterious theft. The Doctor, still unstable, almost shrugs off this duty, but he stops as he remembers the Brigadier and Sarah Jane. The Doctor tries various wardrobe options to match his new persona – including a Viking ensemble, a royal outfit, and a clown suit – before settling on his trademark scarf, coat, and hat. After that, the game is afoot.

Sarah Jane arrives at Think Tank for her tour, and the franchise continues to be progressive with a female director, Hilda Winters, at the facility. Sarah Jane doesn’t expect it, and mistakes assistant Arnold Jellicoe for the director. The Think Tank facility has a robotics division, but the only roboticist, J. P. Kettelwell, left in a very public spectacle. As Sarah Jane chases that lead, the Doctor, Sullivan, and the Brigadier set a trap at the next piece for the disintegrator gun. The robot avoids them by burrowing underneath and stealing the part.

Sarah Jane interviews the roboticist, but that lead is a dead end, so she sneaks back into Think Tank and discovers the robot in the lab. The facility’s director claims that the robot, Experimental Prototype Robot K1, is completely for show, and demonstrates that the robot cannot kill based on the prime directive that it can never harm humanity. The First Law of Robotics lives on, at least in a fashion. Sarah Jane is coerced by the director to keep her experience secret. Of course, the first thing she does is tell the Doctor and the Brigadier.

Winters and Jellicoe reset the robot again – hello, modified Zeroth Law! – and send it out after Cabinet Minister Joseph Chambers. The Brigadier decides to send Sullivan on a James Bond-style mission into Think Tank while the Doctor decides to interview Kettlewell. The robot breaks into Chambers’s home, kills him, and steals some documents. The Brigadier, the Doctor, and Sarah Jane discuss the incident and the Think Tank’s association with the Scientific Reform Society, a group that advocates societal rule by the scientific elite.

The robot visits Kettlewell in a disoriented state, explaining that his orders conflict with his prime directive and seeking help. Sarah Jane visits the Scientific Reform Society while the Doctor and the Brigadier investigate Think Tank. Director Winters claims that the robot has been dismantled, and the Doctor uses his scarf to sweep the floor for clues. They are escorted out just as Sullivan arrives disguised as a medical inspector. Kettlewell later calls the Doctor and informs him that the robot is there, but Winters and Jellicoe arrive first.

The dressing of the Scientific Reform Society was a bit on the nose with the Nazi-like uniforms, attitudes, and symbology. They are bad guys. Like, really bad guys.

The Doctor leaves a note for Sarah Jane and Benton, then takes Bessie to meet the professor. The Doctor encounters the robot, who attacks him under orders. The Doctor tries to escape, but the robot knocks him down. It is about to kill him when Sarah Jane arrives and intervenes. K1 recognizes her and enters its logic loop once again, but UNIT arrives and opens fire. It flees Kettlewell’s lab under UNIT assault, and the professor is found tied up in a storage locker.

Sarah Jane tends to Kettlewell, and he tells her of the robot’s construction. It is made from a living metal, but fear not, because Kettlewell has also discovered a virus that can destroy the metal. Kettlewell mentions that he is a member of the Scientific Reform Society, but that he only visited once. Together, they make a plan to sneak Sarah Jane inside.

We also find that a stunning plot convenience – the combined nations of Russia, China, and America have entrusted the locations and launch codes for their nuclear arsenals to Great Britain – is now the key to the entire conflict. The robot stole that information from Chambers, and now Winters and Jellicoe likely have it.

At the SRS meeting, Winters introduces K1 and Kettlewell as allies, which shocks Sarah Jane. Even more shocking is their betrayal, which the Doctor disrupts after incapacitating the guards with his antics and scarf. Kettlewell’s goals are simple: With the Society’s help, he can finally make humanity to stop ruining the environment.

Winters orders the execution of the Doctor and Sarah Jane, but the Brigadier and UNIT arrive in explosive fashion. Winters, Jellicoe, and Kettlewell escape with the robot and Sarah Jane, and the antagonists uncover Sullivan when he calls the Brigadier. The entire Think Tank is moved to an underground atomic bunker. UNIT tries to storm the site, but Winters deflects them with the automated defense system. She demands the Brigadier’s surrender within 30 minutes, otherwise she will destroy the world in a nuclear holocaust. Having none of it, the Brigadier sends Benton to destroy the machine gun emplacements, and the Doctor uses his sonic screwdriver to detonate the landmines and open the bunker door. Director Winters arms K1 with the disintegrator gun and sends it out to deal with UNIT, where it kills one soldier and destroys a (toy) tank. That effects cheat makes sense since they spent so much on the visuals and new titles.

The action sequences were nice, but the Doctor’s youthful charm and comedic antics were the highlight. They’re kind of refreshing after the seriousness of Pertwee’s Doctor.

Director Winters tasks Kettlewell with unlocking the launch codes and linking the missiles to a worldwide network. She starts the countdown to launch, but Kettlewell stops it and escapes with Sarah Jane and Sullivan. Sarah Jane tries to reason with the robot, and it almost works, but the programming forces it to fire on Kettlewell, and murdering its creator sends it into a logical shutdown.

UNIT invades the bunker, but Winters has already transmitted the launch commands. The director runs while the Doctor reprograms the computer and stops the countdown. Sarah Jane wanders off and is taken by the robot, who is trying to reason out its logical conflict and decides to destroy humanity per Kettlewell’s desire. On a positive note, it chooses to save Sarah Jane.

The Brigadier wishes that he could meet an alien threat that wasn’t immune to bullets – Thank you, Brig! – and Benton tells the team about the living metal and the virus. The Doctor and Sullivan head to Kettlewell’s lab to find the virus as K1 locks the bunker and restarts the countdown. The countdown is thwarted by the fail-safes for each superpower’s warheads, so K1 takes Sarah Jane to the surface. The Brigadier shoots K1 with the disintegrator, but the plan backfires as K1 grows to immense size.

K1 King Kongs Sarah Jane to a rooftop for her safety, then engages the UNIT troops in a terrible special effects spectacular. The Doctor and Sullivan arrive with the virus, and drive Bessie to K1’s feet and deploy the virus. The virus shrinks K1, then dissolves it completely.

Back in the lab, Sarah Jane is upset over K1’s destruction. The Doctor offers her a jelly baby to snap her out of her reverie, and then offers to take her away in the TARDIS.

I love his quote here: “There’s no point in being grown-up if you can’t be childish sometimes.”

Doctor Sullivan arrives just as they were about to leave, and he invites Sullivan along. The “bigger on the inside moment” is priceless as the Doctor is off once again.

With the story and the acting alone, this serial was scoring as a high 4 until the entire super robot fight. Even after that, it’s still good. Baker is delightful as the Doctor, and his companions have great chemistry. I settled on a 4 before adding in the regeneration handicap.

UP NEXT – Doctor Who: The Ark in Space