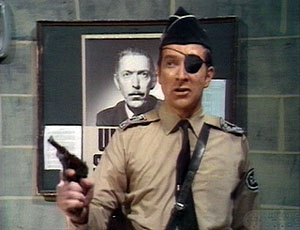 Time is the enemy this time around, and the weapon is the planet Earth.

Professor Stahlman, a rather arrogant child, is in charge of a nuclear powered drilling project in search of a previously untapped energy source. The project is experiencing problems, including a mysterious green goo that transforms people into some kind of emerald werewolves, so an expert is called in to help. This upsets Stahlman, who thinks that UNIT and the Doctor are already causing unnecessary interference and that Greg Sutton’s addition will only make things go slower. He even disables the computer, which provides safety guidance based on hard data, because it stands in his way.

The Doctor is using the same reactor to power experiments on the TARDIS console, which launches him into a dimensional void. Liz saves him by cutting the power, but he manipulates the situation as a goo-infected Stahlman increases the pressure to punch through the Earth’s crust and ends up on an alternate Earth that is a few hours ahead of his reality.

This alternate reality is fascist, with a UNIT analogue led by Section Leader Liz Shaw and Brigade Leader Lethbridge-Stewart. Stahlman is still a petulant ass, and the drilling is still on track. In this reality, the crust is breached and the green slime explodes from the site. Stahlman seals himself in the drill room and exposes the crew inside to the goo, and the planet is at the point of no return. This Earth is dead.

The alternate Earth team helps the Doctor to restore power to the console after a brief demonstration of its capabilities, and the Brigade Leader tries to hijack it to save their lives. In a really nice twist, Liz kills him to defend the Doctor. The Doctor travels back to his reality and stops the drilling just in time to save the planet from the inferno.

It took seven episodes to tell that story.

I liked the return of travelling to the franchise. I’m beginning to share the Doctor’s frustration at waiting for the story to come to him. His life at this point revolves around trying to restore his mobility, and while the threats on Earth are interesting and (for the most part) exciting, exploration is one of the key themes of the show.

I liked the main “mirror universe” characters and how well Nicholas Courtney and Caroline John played them. I also liked the escalation of the conflict between the Doctor and the Brigadier. The Doctor is very abrasive toward the Brigadier – this is a trait I think is somewhat justified given how much the Doctor dislikes everything that UNIT represents in terms of military force – but it also highlights how arrogant, bitter, and self-centered he is in this incarnation. It’s like the First Doctor has returned with a slightly more cheery attitude.

There was one brilliant pop culture moment (“What did you expect? Some kind of space rocket with Batman at the controls?”) and one missed moment that highlights another difference between the Doctors (Sutton repeatedly calls the Doctor “Doc”, which his first incarnation vehemently despised).

I truly loved how empowered Petra Williams, the personal assistant to Professor Stahlman, was. She’s not a typist, she’s not to be loaned out, and she challenges the otherwise untouchable professor.

The two things I wasn’t too keen on were the antagonist and the resulting conflict. The immediate enemy was the strange wolf creatures, which are mutated by the unspecified green ooze from inside the planet. The Doctor links this incident to the volcanic eruption at Krakatoa in 1883, but to what end? The planet is saved by stopping the drilling, but the true antagonist, time, remains in play at the end. Eventually, someone else will drill into the planet in search of the power, and this will all start again. The problem wasn’t solved. It was merely delayed.

Between that and the number of episodes to tell what is really a very simple story, the serial slid from good to mediocre in quick order.

On the other hand, we finally have a threat that UNIT can stop with their guns, so at least they’re finally useful in a fight.

UP NEXT – Series Seven Summary

Leave a Reply to Timestamp #198: The Sontaran Stratagem and The Poison Sky – Creative Criticality Cancel reply

The boys!
Every morning, somebody somewhere gets inexplicably uncomfortable when I put in my contacts lenses.