This is the second installment in a series of looks at each of the wide-released theatrical Star Wars films leading up to the premiere of Star Wars: The Force Awakens. This includes each of the films that comprise the saga’s story after the 2012 purchase of Lucasfilm by the Walt Disney Company and the April 2014 canon reset.

Day one examined the 2008 animated feature, Star Wars: The Clone Wars. For the second entry in the series, I’m looking back on the last of the Prequel Trilogy, Star Wars: Episode III – Revenge of the Sith, which is set 19 years before the events of the first Star Wars film.

I caught this in theaters on opening weekend, which was a bit difficult given the time and place. It was while I was still in the Navy, stationed at the submarine base in Connecticut, and preparing to leave in a couple of months for a deployment. It was easily my favorite of the Prequel Trilogy, and one of the most emotional. Also, of all of the novelizations, the adaptation by Matthew Stover is amazing and the best written of the Prequel Trilogy.

One issue I have with the film, the chemistry between Hayden Christensen (Anakin Skywalker) and Natalie Portman (Padmé Amidala), is minimized in comparison to Attack of the Clones, which is odd since the story tightly revolves around these two star-crossed lovers. Both of these actors are fine on their own, but their scenes together don’t sell me on the affection between their characters. The relationship is more of a courtly love instead of a modern love, and that follows since Star Wars is built on the trappings of knights and princesses. The mistresses are independent souls, and the lover tries to prove his worth through acts of bravery and nobility. It’s an awkward relationship built on innocence, impulse, and an idolatry of the very concept of love, but there’s also an element of chemistry missing from the acting side that makes me question their compatibility.

Christensen’s acting has also been a thorn in my side as far as interpretation. Back in April 2011, I wrote “Tragedy of the Heart” for ForceCast.net, in which I discuss the literary trope of the broken heart. Of the 1200 words in that essay, I get the most e-mail about how I interpreted Anakin’s reaction when Padmé reveals her pregnancy.

At the time of her death, Padmé had been experiencing a great degree of sorrow. First, toward the beginning of Revenge of the Sith, she had been trying to decide if she should tell Anakin about her pregnancy and seemed dismayed by his rather apathetic response to her news.

The feedback indicates that Christensen came across as being surprised or shocked followed by being thrilled at the news. From a certain point of view, I can see that, but the first thing I see in this scene every time I watch the movie is apathy. Maybe it’s because apathy and shock look similar on the surface, or maybe it’s because Christensen couldn’t sell me on it. I’m not entirely sure.

As far as Padmé is concerned, this film sets her back from the progress she made over the previous two installments. The once strong and proud Padmé Amidala who liberated her planet and fought in the Clone Wars takes a back seat to a stereotypical hormonal pregnant woman. No, really. She spends practically the entire film fawning over Anakin and moping about his emotional issues before dying in the final act. She was most powerful in the deleted scenes where she stands up against the tyranny of Palpatine’s machinations, but that doesn’t even make it to the film. What this story does to Padmé is inexcusable.

The last big thing that irks me about Revenge of the Sith is the birth of the twins. Since Star Wars deals significantly in mythological and literary elements – and, hey, I did write an essay about it – I can buy the death by a broken heart or loss of will, but not from the vocoder circuits of a medical droid.

What about the things that I love about Revenge of the Sith?

The Battle of Coruscant

While the films skipped right over the Clone Wars in the three years between chapters, the climax of the epic confrontation was fantastic. The Star Wars main theme fades away into pounding taiko drums as two Jedi starfighters race across the hull of a Venator-class Star Destroyer, and swells into a very martial version of the Force Theme.

It reflects where the Jedi are at this point. They’re no longer the defenders of peace and justice, but are actively waging a war as generals on behalf of the Republic, and even though the name (and the theme) still mean something, it’s tainted by their aggression and loss of balance.

While the George Lucas vision of Star Wars wasn’t so much about spaceships as it was a soap opera about family conflict, the opening siege of the Republic capital made a lot of sense to me as a major step toward the downfall of the Jedi.

Even though Lucas denies it, Revenge of the Sith was timely in the sense of world politics. After the events of September 11, 2001, the world embarked on the Global War on Terror, and the United States passed broad and sweeping surveillance and security legislation with the USA PATRIOT Act. In the United States, public support was extensive, and speaking out against events or leadership was nearly heretical.

Lines like “So this is how liberty dies—with thunderous applause” and “If you’re not with me, then you’re my enemy” brought the reality of the age directly to the silver screen and to the galaxy far, far away. In the tradition of science fiction acting as an existential metaphor, Revenge of the Sith reflected the human condition of the post-9/11 era and provided a warning of our possible future.

Individual science fiction stories may seem as trivial as ever to the blinder critics and philosophers of today — but the core of science fiction, its essence has become crucial to our salvation, if we are to be saved at all.”

George Lucas claims that he wrote the basic outlines for Revenge of the Sith in the 1970s during the Vietnam War era, and that President Nixon was an inspiration for those story elements, but historians have also readily compared the GWOT to the Vietnam War, so the parallels exist.

Order 66 and the Battle of the Heroes

It seems strange to count the Order 66 sequence among my favorite moments of the film, but it is a truly powerful turning point in the saga. The lightsaber battle between Sidious and four Jedi Masters is quick but terrifying as it brings the realization that the Jedi were never fully prepared for the retribution of the Sith. Anakin’s betrayal of Mace Windu is shocking and saddening, and while Hayden Christensen’s distraught acting before the christening of Darth Vader is still painful, the effects layered on Ian McDiarmid’s dialogue make it feel like he’s pulling from deep within the Dark Side of the Force.

From Commander Cody opening fire on Obi-Wan Kenobi’s Utapauan varactyl lizard – Boga’s scream as he falls from the cliffs to his death is heart-wrenching – to Anakin’s assault on the Jedi Temple, the first purge of the Jedi Order brings tears to my eyes every time. 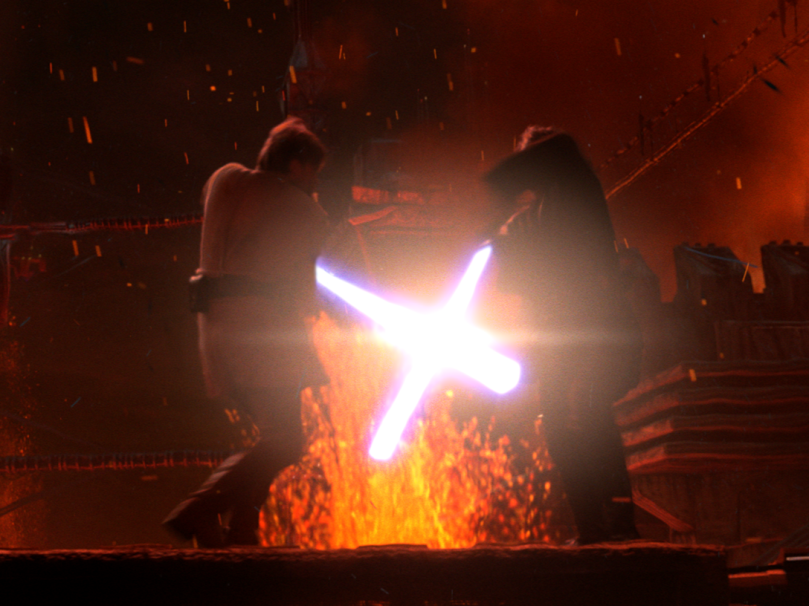 It culminates in the Battle of the Heroes where Anakin and Obi-Wan, equally matched in their skills and expert knowledge of one another, fight in a no-holds barred duel of Light and Dark.

Order 66 is the pivotal moment in this movie, and in the saga as a whole, that shows how far the Jedi have fallen and sets up the events of the original movies that are so beloved in pop culture.

While the circumstances around Padmé’s death are somewhat problematic, the poetry between her end and Vader’s rebirth is elegant. While she is giving birth to Luke and Leia, the Emperor is enslaving the charred remains of Vader into his iconic armor. At the moment that Padmé dies, Vader rises. Her death signals his rebirth, but it also heralds the arrival of the new hope for the galaxy.

It also brings life to a fan theory that Sidious knew how to manipulate the knowledge of Darth Plagueis the Wise all along.

“A New Hope and End Credits”

Last but least is a bonus from the soundtrack. The movie’s end credits start and end with the Star Wars theme, which combines the “Rebel Fanfare” and “Luke’s Theme”. Between those bookends are “Princess Leia’s Theme” and “Battle of the Heroes”, which encapsulates the end state of the story in one of the strongest mediums of the franchise, the orchestral genius of John Williams.

The soundtrack version goes a little extra with an extended version of “The Throne Room” suite from A New Hope, which is basically the “Force Theme”. The extra music strikes me as the concert suite that never was for the Force, and reminds me that the mystical energy field exists outside of the battle between good and evil. It’s always there and always waiting for balance.

Tomorrow, I’ll continue walking back through time to 2002 and my favorite moments from Star Wars: Episode II – Attack of the Clones.

5 thoughts on “Seven Days of Star Wars: Day Two – Revenge of the Sith”

Day 5: Rocket! Rosalyn decided to give him one of the extra battle droid arms from the LEGO Star Wars advent calendar.
Day 5: B1 battle droid. Another staple of LEGO advent calendars, we usually make them sit down because these minifigs are too top heavy.
Day 4: Acclamator-class assault ship. This was the Republic cruiser that preceded the Venator-class star destoyers from the Clone Wars. It's the "grandfather" to the classic Imperial star destoyers of the original trilogy. We first saw these in Attack of the Clones.