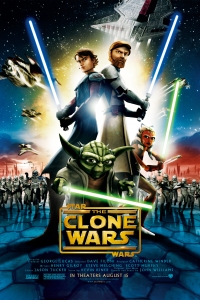 Today kicks off a series of looks at each of the wide-released theatrical Star Wars films leading up to the premiere of Star Wars: The Force Awakens. This includes each of the films that comprise the saga’s story after the 2012 purchase of Lucasfilm by the Walt Disney Company and the April 2014 canon reset.

For the first entry in the series, I’m looking back on the most recent theatrical release, Star Wars: The Clone Wars, which is set between Episodes II and III.

I caught this in theaters during first run, but not opening weekend, and I still regret selecting it above My Sister’s Keeper. The following television show was phenomenal, but the feature is something I’ve only seen twice. If you’re new to The Clone Wars, I recommend jumping into the series first. Come back to the movie after you have the first (and maybe second) season under your belt.

That’s not to say that the movie is terrible. On its own, Star Wars: The Clone Wars is a mediocre feature. The plot was fairly simple: The Republic and the Separatists are both vying for control over Hutt-controlled trade routes. In an attempt to gain an upper hand, Count Dooku kidnaps Jabba the Hutt’s son, which means that the Jedi are on the hook to recover the little Huttling.

The main problem with The Clone Wars feature presentation is that it wasn’t designed as a movie. The Rotta the Hutt story was originally three completed episodes (“Castle of Deception”, “Castle of Doom”, and “Castle of Salvation”), and the Battle of Christophsis story with the introduction of Ahsoka Tano was a completely separate episode. At a private screening, George Lucas suggested to director Dave Filoni (Avatar: The Last Airbender) that they should make them a feature. Sadly, it results in an uneven presentation with a lackluster story.

But, despite all of the negative points, there are some incredibly awesome things in Star Wars: The Clone Wars.

The Clone Wars was a dramatic shift for the saga which, to this point, had never discussed Anakin having an apprentice. While some segments of fandom rebelled – ironically, Ahsoka is well-received in fandom over seven years later – I enjoyed the reasoning within the story: After the events of Attack of the Clones, the Jedi Council wanted to help Anakin overcome his attachment issues as Tano became more independent, and that she would also teach him to espouse a greater sense of responsibility. Obi-Wan appeared to be instrumental in bringing this to the Council as well.

This begins the development of one’s the Prequel Era’s most dynamic and interesting characters. While I still like the Prequel Era, many of the main characters are constrained by the original trilogy of films. From the Original Trilogy point of view, we know where Anakin, Obi-Wan, and Yoda end up, and we also know that the days of the Jedi are numbered. Ahsoka, on the other hand, was a wild card, and her character arc added greater interest to her comrades and a greater depth to the Prequel Trilogy overall.

Thematically, The Clone Wars takes a page from newsreels of the World War II, Korean War, and Vietnam War eras. Similar to the short films that Disney and Pixar are running before their features today – the practice itself being a throwback to the golden age of cinema – features during those wars were preceded by news from the front headlined by a bombastic announcer.

The Clone Wars replaced the standard opening Star Wars crawl, which provided a slice of background for the adventure to come, with introductions by Tom Kane (also the voice of Yoda in the series) in a caricature of the newsreel announcer. I was in love with this idea from the first time I heard “A galaxy divided!”

Kevin Kiner did fantastic work with the score in both the movie and the follow-on series. He kept the music in the Star Wars flavor while also keeping it light (for a cartoon show) and unique. He also steered away from simply repeating the themes from the movies over and over again.

Going hand-in-hand with the introductions, he reworked the Star Wars main theme into a brass heavy patriotic march, which kept the feel of the newsreel style and provided the energy to launch into tales of Jedi at war.

Some of the greatest innovation in Star Wars comes from the battle sequences. Before August of 2008, I had never considered Walkers being able to scale a sheer cliff, but then the AT-TEs did it at Christophsis. My mind was blown at first, but then all I could say was, “Of course they can.”

Tomorrow, I’ll continue walking back through time to 2005 and my favorite moments from Star Wars: Episode III – Revenge of the Sith.

6 thoughts on “Seven Days of Star Wars: Day One – The Clone Wars”