The subscription toy box by mail model is nothing new, but it is certainly an expanding one. Popularized by Loot Crate over the last few years, the concept is simple: In exchange for a periodic fee, a box will arrive filled with collectibles focused on a theme. What started as a monthly box of collectibles for geeks has expanded into regular boxes of toys for pets, health food aficionados, doomsday preppers, and even more kinky pleasures. Whatever you want, there’s probably a subscription box for it.

Now there is one for Star Wars fans.

Powered by Funko, the same company behind the adorable cartoonish vinyl bobble-head dolls with oversized noggins, Star Wars: Smuggler’s Bounty promises to deliver completely exclusive items, valued at double the subscription price of $25, with a guarantee of no filler. One of the things that prevented me from investing in Loot Crate or similar boxes were reviews from friends who were disappointed; the boxes tended to have one or two big ticket items like t-shirts or action figures surrounded by the detritus or miniature five-page comics, stickers, and generic paper bookmarks or postcards. Funko’s promise that the entire box would effectively be a big ticket purchase sold me on trying the first installment.

The premiere box, focused on the villainous First Order of The Force Awakens, was shipped via UPS and was transferred to the USPS for delivery, and it made no bones about what it was. It boldly stated on the outside that this was a box full of goods from a galaxy far, far away – or at least as far as the CollectorCorps.com headquarters in Dallas, Texas. The box was very durable and was sealed with a strip of packing tape. 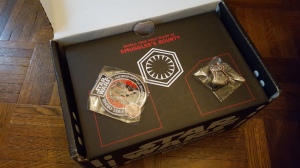 The front flap of the box pulled out and opened the top like a treasure chest, revealing two items attached to an intermediate platform. The first was an embroidered patch showcasing a TIE pilot from the new movie. The second was a collectible Kylo Ren trading pin. Both of these items looked like something of the same quality that is found at the Disney Parks.

The platform folded up to reveal the depths of the bounty, including a simple badge lanyard and a navy blue Funko t-shirt with the First Order stormtrooper, along with two Funko Pop figures. A friend of mine who also signed up for the box received a Kylo Ren shirt instead, so they appear to be randomized around the First Order theme. 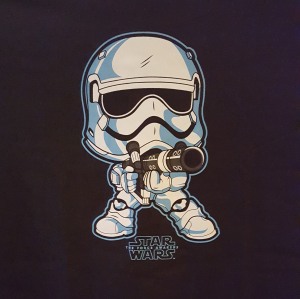 I received the chrome-plated Captain Phasma and a pure black TIE pilot, and after looking at the back of the boxes, there is another TIE pilot with red stripes in the series. I wonder if it was randomly packed or if it will be an hard-to-find exclusive available later on.

After it was revealed to be in the box a month ago, the Captain Phasma figure was one of items I was anticipating most. The figures on store shelves are painted a metallic gray, which isn’t quite the same chrome effect we’ve seen on the character in the trailers. The chrome Phasma adds an extra (forgive me) pop to the figure.

The Star Wars Funko figures have all been on attached to a logo-branded pedestal, which is fairly unique in the brand. Other figures I’ve purchased stand alone, and the TIE pilot I received in this box is removable from its pedestal. I don’t know if this is a unique feature, or if it didn’t get a couple of dabs of glue before leaving the assembly line.

By my estimation, Funko delivered on their promises of value and content. The figures go for around $10 in stores, and the t-shirt is of the same quality you’d find at sites like TeeFury for $10-15. Hot Topic sells the Funko Pop shirts for $20-25. The pin, patch, and lanyard all go for about $5 at Disney Parks, and while they are the low end items of the box, they certainly beat the socks off mini-comics and postcards.

In addition to the $25 every other month plan, Smuggler’s Bounty also offers a yearly plan for $150 (payable all at once) with an exclusive gift on the anniversary of subscription. The January box has already been announced with a Force Awakens Resistance theme and a focus on the spherical droid BB-8.

The Force is strong with this box, and I’m definitely willing to take home my share of the bounty once more.