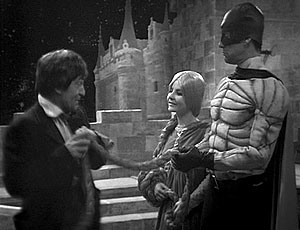 Picking up right where the last one ended, the fluid links go nuts again. I wonder if they’re still under warranty. As a result, the TARDIS goes nowhere. I mean, actually to a place the Doctor calls “nowhere,” but we find out later is the Land of Fiction.

Each companion sees their home on the scanner and are lured into the setting where characters from fiction are real. The TARDIS is unavailable because it appears to have exploded. The travelers are separated and start looking for each other, solving riddles along the way to find a way out of this odd little story that was actually quite entertaining once it got past the first couple of episodes.

The use of a different actor for Jamie two episodes was a nice cover for Frazer Hines, who took time off after contracting chicken pox. I also liked the stop motion for Medusa’s head, as well as the twist with the Karkus, who cannot be proven fictional (and therefore nullified) by the Doctor since he has never heard of the character. Zoe kicks some butt and saves the Doctor.

The Doctor looks like he recognizes the name “The Master”, and even seems amused by the charge of treason – “Treason, again, really?” – It’s not the same character, but, knowing the future, the coincidence is neat. This Master is an Earth-based author who was abducted and forced to rule this land. He’s looking for a replacement, but the Doctor refuses, so the Master decides to simply take over the Earth if he does not comply. The Doctor uses the power of the fictional characters against the Master to destroy the Master Brain (which controls this little pocket universe), save the companions, and escape the Land of Fiction.

Overall, the first couple of episodes were pretty bad, but the serial resolves nicely in a battle of imagination and wits. I was disappointed by the ending, or really, lack thereof. The TARDIS reappears and… credits.

At eighteen minutes, one would think that with the shortest episode ever in the history of this show, they could have spared an additional couple of minutes to write a proper ending and set up the next serial. Alas, no.

UP NEXT – Doctor Who: The Invasion