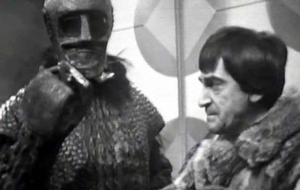 Traveling through time and space, and it’s like they never left. Except this time, the TARDIS is sideways.

Come to think of it, I’m a little surprised that the TARDIS doesn’t have its own gravity. I mean, sure it makes for great comedy to have the ship fall over and everyone topple, but it seems rather unsafe from the materialization aspect. Imagine that the ship lands, falls off a cliff, and the Doctor wastes a regeneration because he snapped his neck by crashing into the library wall at full speed.

It’s an ice age in the far future, and people are dependent on computers to such an extent that they can’t even make simple decisions on their own. It’s so bad that the team’s leader, Clent, makes the Doctor prove his qualifications after the Time Lord saves the base and their lives. Part of me wanted the Doctor to just walk away and let this civilization freeze. It seems that the Doctor is a better man than me.

This future came about because of artificial crops, which minimized the need for real plants. As they died off, less carbon dioxide was produced and the Earth’s heat was no longer retained. I’m going to stop here and quote another good doctor: “Now wait just a damn minute!”

It’s been a few years since my high school biology class, but I seem to remember plants consuming CO2 and producing O2. The science was a bit lacking in this episode. I understand that they corrected it in the novelization, which is technically canon, but I’m not pursuing the books or audio dramas at this point.

These humans have discovered something called an Ice Warrior. Long story short: It wakes up and explains that it hails from Mars and has been frozen for millennia, and he needs his warriors to decide whether to invade or leave. It forces Victoria to find a power pack and goes to thaw his compatriots. After Victoria is kidnapped, Jamie and Arden set out to rescue Victoria from the Ice Warriors, but they get ambushed and left for dead. Luckily, Jamie is rescued by scavengers.

The Doctor develops a plan to use ammonium sulfide to incapacitate the Ice Warriors – I loved how he tested the chemical dispenser, since he’s been so skeptical of this civilization, by having it create water – and ventures off to the Martian ship. Of course the humans protest because they can’t afford to lose anyone else, but the Doctor was right: He was superfluous at the base.

The Ice Warriors are fighting the scientists because they think the ionizer, which is used to melt the ice, is a weapon. They’ve decided to leave (good!), but first have to invade the base (bad!) to get fuel for their ship. That plan begins with trying to shatter the base’s protective dome with a sonic gun. After the Doctor incapacitates the Ice Warrior gunner with the ammonium sulfide mix, he and Victoria change some settings and make the sonic gun more likely to hurt the Ice Warriors.

I would have had sympathy for the Ice Warriors because they were trying to leave somewhat peacefully, but then they started being violent to get the fuel. I had no problem with their (probably not so) final fate. The computer can’t help because it’s built to preserve itself and the society, so it short circuits and the scavengers save the day by firing the ionizer at the ship and disintegrating it.

Victoria really did a good job in this episode of carrying her own. Sure, she was a bit of a damsel in distress, but she also was great in moving the plot. I especially loved how she couldn’t describe the specifics of the Ice Warrior ionic engine, not because she was stupid, but because she didn’t have the words based on her temporal reference. I can forgive the earlier scientific snafu for that brilliance.

I can also forgive the generated apathy for the humans. They were supposed to be frustrating in their dependence on a self-serving computer. What’s harder to forgive is the plot convenience of the Ice Warriors actually having enough fuel to start lifting off. That negates any intelligence I attributed to the Ice Warriors because they attacked for no reason. It’s also lazy plot continuity.

Overall, The Ice Warriors is a fun enough story, but the plot and scripting are all over the place. I’d give it a 3.5, but the scoring method is based on whole numbers, and I follow the trend of John and Paul at Cyborgs: A Bionic Podcast by being optimistic when in doubt.

UP NEXT – Doctor Who: The Enemy of the World

8 thoughts on “Timestamp #39: The Ice Warriors”