Jeff Deck, co-author of The Great Typo Hunt, recently reached out to me to promote his new novel Player Choice. He provided me a copy in exchange for an honest review.

It’s 2040. With neural implants, people can play games in an immersive virtual reality known as the aether space. Game designer Glen Cullather has a plan for the most ambitious aether game ever imagined: a fantasy epic that gives players the freedom to do anything.

But Glen’s own life is fragmenting into alternate realities. He can’t tell whether his aether game idea has succeeded, or failed miserably. And Freya Janoske is either his biggest rival, or his most intimate partner. Glen must figure out what’s real and what’s, well, fantasy—for his own survival.

Player Choice is a fast-paced gaming sci-fi adventure that dares to ask: What happens when unreality becomes our reality?

The protagonist, Glen Cullather, is a successful game programmer. He lives in a world not too far from our current reality where technology dominates everyday life, from interactive semi-sentient digital assistants to fully-capable AIs who can run entire companies. Gaming is immersive in shades of today’s Oculus Rift and Star Trek’s holodeck technology, and Glen is on his way to pitch a new experience called Novamundas to the company’s board of directors when his entire world goes sideways.

The story is quickly paced and the mystery around the reality of Glen’s situation is exciting. It kept me engaged and drawn back to the pages, as did the cognitive exercise of what else this universe could explore. The characters were diverse and colorful, and the social message was clear as the story drew to a close, warning readers of the potential pitfalls from over-reliance on tech and limited decision making.

Novamundas is built on the philosophy of providing choice to the players by trying to make them think beyond the hack-and-slash that dominates the gaming scene, even to the point of making violent problem-solving in the virtual world a chore rather than a quick means to drive the game’s story.

This is in contrast to the game’s creator, who is limited by his own tortured past: Glen’s own agency is limited by mental trauma that he hasn’t worked through, which leaves him as man who treats women and himself poorly. For that reason, I had a hard time identifying with Glen. It was necessary for the hero to be a flawed character, but he was not a hero that I could cheer for.

Similarly, Freya Janoske was hard to identify with because of how she was filtered through Glen’s experiences. Since this story is told entirely from Glen’s point of view, every interaction is laced with his prejudices and biases. Again, it’s a great way to tell Glen’s story, but it also becomes difficult to develop a sympathetic relationship for supporting characters when every interaction before the final three chapters is completely subjective.

The second half of the story is dominated by the aether world of the game as Glen’s goals start to coalesce. The game itself is quite interesting, and the dynamics of emphasizing creativity over violence are intriguing, but the story is bogged down in the nuts and bolts of skills, attributes, and gaming mechanics. It made sense to me as a casual gamer, but the details and gamer lexicon might potentially derail the story’s flow for anyone not well-versed in the gaming world, which adds an accessibility hurdle to the moral message.

The pacing is more evident in the second part, especially once the characters realize the urgency of their situation. The actual core conflict and the goals of the antagonists – yes, bad guys with actual goals and moderately complex motivations! – was very fun to think about. Unfortunately, I think the pace hindered Glen’s character growth as he is forced to react quickly to each development and never gets a chance to really reflect on what he’s learned about himself or resolve his inner demons. The story actually ends at the beginnings of his healing process, which left me feeling like I’d been cheated out his complete arc.

What this story did do for me is make me think. From a morals, messages, and meanings standpoint, it leaves several avenues to explore in how a society exists in a world dominated by technology. While it’s far from being neatly wrapped with a big red bow, that aspect of science fiction exploring the human condition through allegory was refreshing.

Overall, I give Player Choice three and a half stars out of five. For Goodreads and Amazon, which don’t deal in halves, I’ll bump it to four. 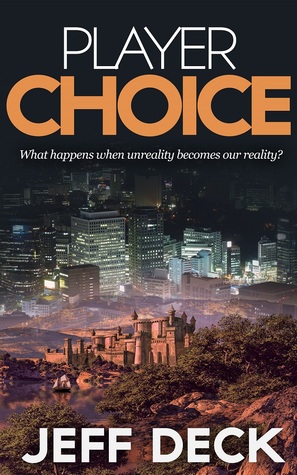