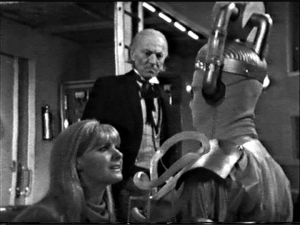 This serial had a slow lead up to an otherwise enjoyable story. It’s the introduction of the Cybermen! Wow, they have come a long way in costume and character design. The Cybermen were a bit hard to understand, and were certainly more individual than the later versions.

It was good to get the backstory on such a popular villain, and the story keeps rolling with excellent tension surrounding the stranded astronauts and assault in isolation. Cutler was the trope of the blood-thirsty military officer, which felt a little bonk-bonk on the head with the message. That in mind, I get Cutler having no problem killing the Cybermen, but what didn’t follow was Ben enabling Cutler to kill them. Ben was terribly upset about killing in self-defense mere moments earlier, but then hands Cutler the gun without hesitation.

The Doctor spontaneously collapses and remains out of commission for an episode of the serial. This leaves the companions to carry the story, both in and out of the serial. Hartnell was obviously having a hard time with this one, and luckily the companion actors and characters are both strong enough to keep the gears turning.

Remember the rules, though: It’s a regeneration episode, so it get an automatic +1 on the score. They’re always hard episodes to do.

Watching the First Doctor say goodbye was heart-breaking. The companions think he’s either worn out or going daft, but it felt a lot more like he was completely lucid in his final moments. Just in case this regeneration thing doesn’t work, “stay warm.”

UP NEXT – First Doctor Summary