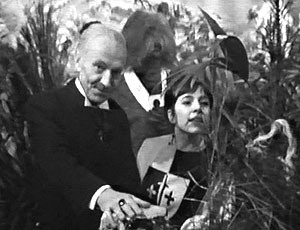 When we finally get introduced to the main story, it was with a prisoner being miniaturized for his crimes. All I could think was please, not another “Honey, I Shrunk the Doctor” serial. Thankfully, it wasn’t.

Dodo is impulsive and vibrant, and babbles like a brook. Indulging the obvious comparison, she’s no Susan, but she is a welcome contrast to the glum and dour Steven. She’s also a walking petri dish that ignites the conflict in this story by re-introducing the common cold to a group who solved that problem centuries ago. It’s understandable that the humans on the Ark react so energetically to this crisis, since it could likely kill them all and destroy everything that they have worked for. Thankfully, the Commander is more level-headed and fair than his interim replacement.

It’s an oddity of the era in which this show was made, but it caught me off-guard that the Doctor says “bless you” for Dodo’s sneeze. That saying derives from the outbreak of the bubonic plague in 590 AD. Pope Gregory I ordered unceasing prayer in hopes of divine intervention against the raging illness, so it became common for people to be offered a blessing for sneezing (“God bless you”) as an attempt to stop the disease’s progress. The Tenth Doctor once stated that he didn’t believe in any specific god, but had met many beings claiming to be gods. In story, is it just a quirk the Doctor has picked up from humans, an attempt to make Dodo feel more comfortable, a complete throwaway line, or something else?

This story has a common trope of an Ark to maintain the planetary status quo during calamity, though the miniaturization of the majority of the ship’s inhabitants is new to me within the playbook. The animals aren’t being used for food as evidenced by the rehydration process we see in the kitchens, so I wonder why they aren’t miniaturized for storage as well.

In a twist, 700 years later the friendly Monoids have become militant and taken over the ship. The problem I had with this idea was that the story didn’t sell me on the idea that the Monoids were slaves to the humans. They appeared to work hand-in-hand, and offered their help in building and flying the Ark. They didn’t appear to be subjugated in the first two episodes. As an aside, if they are supposed to be slaves in the first half of the story, that makes the makeup choices a little troublesome.

That said, I have a lot of respect for the actors portraying the Monoids. It can’t have been easy to spend all that time under hot studio lights in a black fabric sack with a Ping-Pong ball in their mouths.

It was nice to see bright and vibrant sets, even if the background paintings on the planet set are painfully obvious.

The Refusians were awfully convenient, but typical pulp sci-fi. Also, the puppet show in The Time of the Doctor makes more sense now that I know who the Monoids are.

UP NEXT – Doctor Who: The Celestial Toymaker