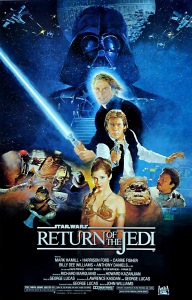 This is the fifth installment in a series of looks at each of the wide-released theatrical Star Wars films leading up to the premiere of Star Wars: The Force Awakens. This includes each of the films that comprise the saga’s story after the 2012 purchase of Lucasfilm by the Walt Disney Company and the April 2014 canon reset.

Day one examined 2008’s Star Wars: The Clone Wars. Day two looked at Star Wars: Revenge of the Sith. Day three was dedicated to Star Wars: Attack of the Clones. Day four examined Star Wars: The Phantom Menace. Today is about Star Wars: Episode VI – Return of the Jedi, which is set four years after the events of Star Wars: A New Hope.

Return of the Jedi has always been my least favorite of the original movies, but it’s still a good entry in the franchise. I really enjoy most of it, with the exception of the Tatooine sequences which I find rather slow.

I don’t fully recall the first time I saw Return of the Jedi, but I was very excited to see it opening week for the 1997 Special Edition releases. It was originally scheduled for a March 7th premiere, but ended up getting pushed back by a week after Lucasfilm saw how well the other two were performing. The Special Edition changes didn’t bother me at all except for Jedi Rocks, the new musical number in Jabba’s Palace that replaced Lapti Nek. The extra footage with Boba Fett carousing with the band’s backup singers is pretty funny to me, but the musical sequence itself kind of falls flat compared to Lapti Nek.

I was okay – okay, not excited, but just okay – with the 2011 Blu-Ray changes as well. I was apathetic about the Jedi Spirits change that replaced Sebastian Shaw with Hayden Christensen since the story logic makes sense – the spirits retain how they saw themselves at their death, Anakin the Jedi Knight died in Revenge of the Sith when he became Darth Vader, and I doubt he ever looked in a mirror after donning the armor – and Shaw is still in the movie when Luke removes Vader’s helmet. His screen time was reduced by, what, ten seconds? I don’t see that as a slight to the actor.

What I do wonder is how Anakin got access to the Force Spirit knowledge. Yoda and Obi-Wan learned from Qui-Gon Jinn’s spirit, but there’s nothing in the story to suggest that Qui-Gon also visited Vader. That is the major plot inconsistency between the Prequel and Original Trilogies that makes me really wonder.

Finally, the biggest thing that annoys me about Return of the Jedi is the music. The soundtrack on the film is fantastic, and when Sony released the full soundtracks in time for the Special Editions, I jumped on the opportunity. The problem with Jedi is how Sony mixed the music when converting it to digital: The sound is muddy and muted, like they over-compressed it when removing some of the background noise. The better sounding version actually comes from 1993’s Star Wars Trilogy anthology release, which compiled one CD for each movie and a fourth disc with previously unreleased tracks. It’s still not the complete soundtrack, and it does have a significant hissing sound, but it sounds a lot better than the Special Edition. It also contains “Lapti Nek” and two versions of the Ewok “Yub Nub” track.

Even as the weakest of the Original Trilogy, there are things that I love about Return of the Jedi.

Luke really comes into his own with this film, growing from the wide-eyed innocent in A New Hope to the impulsive warrior in Empire Strikes Back and finally landing on a calm and pensive Knight in this story. He isn’t as cocky in this story as he was heading into the duel at Bespin, and he takes thoughtful action in an elaborate rescue plan for Han. He’s not afraid to take action, but he also reflects a lot of Qui-Gon Jinn and a later Obi-Wan Kenobi in watching and learning about what’s happening around him before jumping into the fray. He’s deeply in tune with the Force at this point, and confronts his fears to help bring his father back to the Light.

This is my favorite interpretation of the young Jedi.

The Death of Darth Vader

This is also the story that provides the greatest depth to Darth Vader. Many people tell me that they don’t like Return of the Jedi for neutering the badass Sith Lord we saw in two movies, but this is an enforcer whose motivations are being questioned by his über-evil boss and whose very essence is being torn by his own conscience.

After weighing the options between Palpatine and his son, Anakin re-emerges and saves Luke’s life by killing his own master at the expense of his own life. In one of the moments in Star Wars that brings a tear to my eye, he looks on his son – the very son he thought he lost when Padmé died – without the aid of the armor that defined his second life. The music behind the touching scene between Mark Hamill and Sebastian Shaw only adds to the feeling, using the Imperial March in muted and singular notes to signal Anakin’s passing.

It’s a little different after watching Order 66 in Revenge of the Sith because I find it a little more difficult to forgive someone who kills kids in cold blood, but the nostalgia still fuels my emotions when watching a son seeing his father for the first and last time. It’s not so much the details, but the sweep of the mythology that carries the meaning for me.

The Ewoks are an element of Star Wars that have never bothered me. First, they’re cute (even though they’ll eat you), and second, they make an example out of the Empire’s arrogance. All that military might at their disposal and they can’t defeat a primitive species that fights with rocks and spears.

The biggest thing I like about the Ewoks is how they party, both after accepting the Rebels into the tribe and after the destruction of Death Star II. I’m a big fan of both the original and Special Edition endings: The original was good for the time in wrapping up the movie, but the Special Edition version wraps up the trilogy and, in part, the six-film arc. I love “Yub Nub” and find myself humming it quite often, but I also love the new music and visuals developed for 1997’s releases. It adds a larger scope to the Rebellion’s actions and the Empire’s defeats.

Tomorrow’s entry in the Seven Days of Star Wars will take a look at fan-favorite Star Wars: Episode V – The Empire Strikes Back.

3 thoughts on “Seven Days of Star Wars: Day Five – Return of the Jedi”

Flowers in June.
The boys are in for routine check-ups. The vet has this helpful policy.
Advertisement or break-up line?