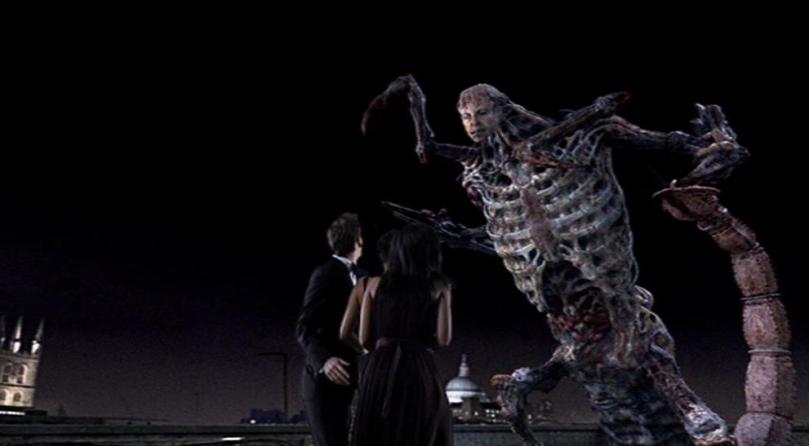 Tonight’s event: The Last of the Time Lords vs The Immortal Scorpion King.

The Doctor returns Martha to her flat, intent on dropping her off at the end of her journey on the morning after she initially left. The reprieve is shortlived when Martha’s mother calls with news that her sister Tish is on the news. Professor Richard Lazarus has discovered how, with the single push of a button, to change what it means to be human.

The Doctor is obviously intrigued.

Before the demonstration, Professor Lazarus and Lady Thaw discuss their plans, intent on providing Harold Saxon with an intriguing show. Meanwhile, the Doctor and Martha arrive in their finest black-tie, despite the omen that bad things tend to happen when the Time Lord wears that suit, and meet Martha’s family and a platter of “nibbles.” The meeting between the Doctor and Martha’s mother is tense, to say the least, but he is saved by the professor as the demonstration begins. Lazarus steps into the giant chamber at the center of the room and, with a little help from the Doctor as the device nearly overloads, emerges decades younger.

He has created a fountain of youth.

Lazarus makes the rounds later with Lady Thaw, but he’s stopped by a sharp pain. He snags a platter of hors d’oeuvres and wolfs it down to quench what the Doctor recognizes as an energy deficiency, somewhat similar to his own regeneration. Lazarus and the Doctor spar momentarily before the professor departs. The travelers set to work on the mystery, using the DNA Lazarus left as a farewell kiss on Martha’s hand to start their investigation.

The DNA fluctuates during their analysis. Similarly, as Lazarus and Thaw share a drink in his office, the professor transforms into a scorpion-like creature after insulting the woman about her age. Lady Thaw doesn’t survive much longer.

While Martha’s family debate over the Doctor’s presence in Martha’s life, Lazarus returns to the floor in a different suit. He summons Tish with a lecherous leer as the Doctor and Martha discover what’s left of Lady Thaw. Lazarus leeched the life-force out of her.

The Doctor and Martha return to the floor only to receive word that Tish and Lazarus are on the roof. While they rush to the rescue, Francine meets a mysterious stranger who tells her that Martha should choose better friends. Martha and Doctor interrupt Tish and Lazarus as the professor muses over T.S. Eliot. Tish is angry, but that is shortlived as Lazarus reveals himself. Jones, Jones, and the Doctor run as the building goes into lockdown. The Doctor tosses his sonic screwdriver to Martha so she can pick the lock while Lazarus storms the show floor. The Doctor cannot save one of the attendees, but he is able to save Martha’s family by goading Lazarus into a chase through the building.

Martha sees her family to safety as the Doctor climbs through the utility room. She’s able to open the main doors and let everyone out, but she also turns the power back on. To her mother’s chagrin, she rushes to the Doctor’s side. Meanwhile, the Doctor sets a trap with gas and an electrical spark, but the explosion doesn’t stop the monster.

The mysterious man returns and whispers secrets in Francine’s ear about the Doctor. Back on the show floor, the Doctor and Martha seek refuge inside the Lazarus capsule as the professor scorpion switches it on. The Doctor works feverishly to reverse the polarity and reflect the energy into the monster. They find Lazarus back in human form, soon to be taken away by an ambulance.

Francine greets the Doctor with a slap to the face. As the ambulance crashes, the Doctor rushes to find the EMTs drained of energy. Francine is upset that her daughters join the investigation. They follow the scorpion’s energy to the nearby Southwark Cathedral and find a human Lazarus talking about his childhood during the Blitz. The Doctor empathizes as he makes plans, and Martha eventually lures the beast to the top of the belltower. The Doctor uses his sonic in concert with the cathedral organ to stun Lazarus. The scorpion falls the stone floor below and dies on impact, transforming one last time to the old man he once was.

Martha and the Doctor end up back at the TARDIS, and he offers her another trip through time. She doesn’t want to be just a passenger, so he offers her something more. As she rushes into the TARDIS and they dematerialize her phone rings. It’s Francine on the other end with a message from Harold Saxon: The Doctor is dangerous, and Martha is not safe.

What could be an otherwise average story does a lot to move the ball forward for the second half of the season. The Doctor/Martha relationship is fairly well established, but now we get the added friction of distrust from Martha’s closest allies courtesy of the mysterious Mr. Saxon. It almost makes up for the CGI scorpion, which is dodgy while still being one step above The Scorpion King‘s big reveal from 2002.

The season’s been pretty good so far. Let’s see if this head of steam keeps the train on the rails.

4 thoughts on “Timestamp #188: The Lazarus Experiment”

Sleepy pretzel dog.
Snuggle time.
From my family to yours, we hope you have a happy new year.