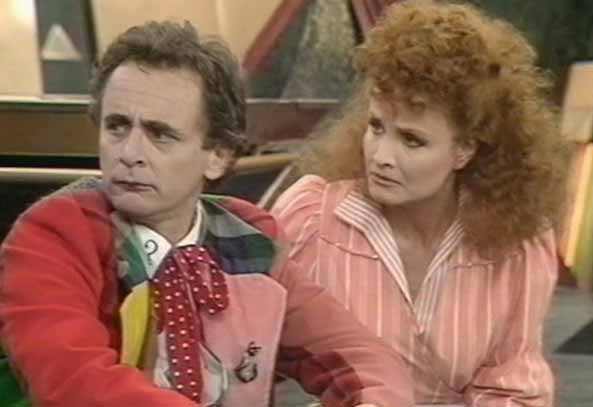 In a rare pre-credits sequence, a rather well-done for the era computer-generated TARDIS topples tail over teakettle, leaving the Sixth Doctor and Mel unconscious on the floor of the console room. On Lakertya, the planet below, a native watches the TARDIS hurtle to the ground in a rainbow of energy. Within moments, the doors open from the outside to reveal the Rani and her henchmen. The Rani orders that Mel is left behind as the creatures take a freshly regenerating Seventh Doctor to her laboratory.

I’m not adverse to them. I like them better than the dark theme from the Twenty-Third Series, but man, oh man, are they so very ’80s.

In the Rani’s lab, we see Albert Einstein being loaded into a stasis chamber by two Lakertyans. The Rani has kidnapped many genius scientists from Earth history, and now she has the Doctor to play with. The newly regenerated Time Lord snaps awake with a burst of energy and a babble of speech, eventually confronting the Rani. He threatens to smash some equipment with his umbrella, forcing the Rani’s hairy companion to shoot him with a laser web device.

Sylvester McCoy’s energy and acting are refreshing. I found myself grinning during this whole sequence.

One of the Lakertyans, Ikona, enters the TARDIS and retrieves the unconscious Mel. His female counterpart, scared off by the Rani’s anger, is soon killed in explosive fashion, but not before meeting Mel. Ikona warns Mel that if she runs, she will find more of the same explosive traps. He also believes that Mel is allied with the Rani and takes her for ransom. He drags her through the typical Doctor Who quarry, but she ends up rescuing him from a trap and earning her freedom. They continue to run, trying to evade the Tetraps (the Rani’s hairy foot-soldiers).

In the lab, the Rani drugs the Doctor so he won’t remember waking up before, and when he comes around again, she is (poorly) disguised as Mel. The Rani attempts to convince the Doctor to repair some broken equipment in (what she calls) his lab. He exhibits some Sixth Doctor tendencies and an ability to play the spoons, but the tech confounds him. The Rani convinces him to return to the TARDIS for some tools.

Upon returning to the TARDIS, the Doctor decides to change clothes. He tries on a Napoleon outfit, a British guard uniform, an arcane schoolteacher getup, the Fourth Doctor‘s burgundy attire with the wrong scarf, the Third Doctor‘s brown coat and ruffles, the Fifth Doctor‘s ensemble, and the Second Doctor‘s fur coat before settling on his trademark style.

Note: The suspenders should be underneath the sweater.

The Doctor nearly recognizes the Rani under her disguise, but after she slaps him he goes off to find the radiation wave meter.

Elsewhere, Mel runs from the Tetrap but trips one of the exploding bubble traps. The bubble bounces all across the landscape – understandably, Mel is screaming the entire time (and goodness, can she scream) – before safely landing in a lake. Ikona frees her and they continue to run, but they are soon ambushed. As Mel screams, Ikona finds a hidden rifle to defend them. They end up at the Rani’s tower.

The Doctor continues to work on the Rani’s equipment, but he is obsessed with what lies beyond a sealed door. Prior to this, the Rani had stated that the Lakertyans weren’t an advanced species, so the Doctor is puzzled when the Rani suggests that the Lakertyans can patch a broken mineral plate in the device. She leaves to find the necessary gear, locking the Doctor in the lab.

Mel and Ikona encounter Faroon, another Lakertyan, and they mourn the death of Sarn, the female Lakertyan… Faroon’s daughter. Faroon leaves deliver the bad news to Beyus, Sarn’s father, and Mel and Ikona follow. Ikona distracts the Tetrap guard long enough for Mel to sneak in. Meanwhile, the Tetrap guard mistakenly apprehends the Rani (who is still dressed like Mel).

Mel finds the lab and assaults the Doctor, unaware that the Time Lord has regenerated. After a brief altercation, they verify each other’s identities. Mel knows about regeneration, but she’s still astounded by the change. The pair are rescued from the lab by Faroon and Beyus and taken to the stasis chamber where they discover the sleeping scientists and a chamber set aside for the Doctor.

The Rani is freed and, after berating her minion, heads for her TARDIS. Her time capsule is a small pyramid, and the inside is futuristic and gorgeous. She fixes the mineral plate and returns to her lab, prompting the Doctor to send Mel with Faroon and Beyus. The Doctor uncovers the Rani’s ruse and discovers her plan: She is channeling the scientists’ minds into a single artificial brain in an attempt to harvest strange matter from a nearby asteroid.

Okay, given that only strange matter can affect strange matter, therefore requiring the brain to develop a lightweight substitute with the same qualities, why not just use the substitute for the nefarious scheme? Perhaps a difference in purity or something?

Goodness, can she scream.

The Doctor meets Ikona, and together they trick a Tetrap into one of the explosive traps. Ikona takes the Time Lord to the Center of Leisure where his people are kept happy and indolent despite their servitude. The Doctor doesn’t understand why Beyus told him to visit the center, but he does question the strange sphere in the center of the room. The device’s purpose is made clear as the Rani punishes the Lakertyans by releasing killer insects. As they run, Faroon tells the Doctor that Mel is being held hostage, and the ransom is the missing piece from the machine. The Doctor makes the trade, but the exchanged hostage is a hologram. The real Mel is pressed into service as Beyus’s assistant.

This section of the story was the weakest part and an unnecessary tangent.

The Doctor is captured as he and Ikona try to sneak back into the laboratory. The Doctor is loaded into his stasis chamber and his intelligence is networked into the artificial brain – Mel responds by screaming, because goodness, can she scream – but the Doctor’s inputs are nothing more than bad puns and nonsense. While the Rani sorts out the issues, she dispatches the army of Tetraps to exact “selective retribution” on the dissident Lakertyans. After she disconnects the Doctor, Mel and the Doctor trap her in the stasis chamber. Unfortunately, the Doctor’s intelligence provided the brain with the answer: Loyhargil.

The answer is the Holy Grail? Seriously, anagram it.

The explosion of the strange matter will create a shell of chronons (discrete particles of time?) around the planet, causing the brain to expand, fill the sphere, and become a Time Manipulator. Using that, the Rani can travel through time and alter history, adding order to the entropy of evolution throughout the universe. She also mentions that she alone will survive the supernova, a fact that upsets her Tetrap assistant. The Rani synthesizes her grail and heads for her TARDIS.

The Doctor and Mel escape the lab one more time to reunite with Ikona and help him spur the Lakertyans into full rebellion. The travelers then return to the lab and free the scientists, prompting Beyus to sacrifice his life to destroy the brain and delay the launch just long enough to miss the asteroid and foil the Rani’s plans. The Rani retreats to her TARDIS, but her escape is shortlived as the Tetraps, collectively stowed away in the time capsule, “invite” her to join them on their homeworld.

The Doctor and Mel return to their TARDIS, saying their farewells to the liberated Lakertyans and escorting the scientists aboard for their return home. The Lakertyans have learned that they must solve their own problems if they are to survive.

Starting with the story, it was average at best. Regeneration stories are often rough since they involve new actors (and sometimes new production teams), but this one seemed even more troubled than most. It wasn’t bad, but it just wasn’t good either. Continuity-wise, I really wish that the BBC could have made amends with Colin Baker, but I understand his reasoning for not returning. It’s obviously Sylvester McCoy with a dodgy wig behind the regeneration effect. That doesn’t bother me as much as the Rani’s random mole. I don’t recall seeing it in her previous appearance, and it was only visible for a short time here.

What buoyed this up for me was Sylvester McCoy’s energy and acting, which were refreshing. Because of that, I have high hopes for what’s to come.

UP NEXT – Doctor Who: Paradise Towers

Snuggle time.
From my family to yours, we hope you have a happy new year.
Day 24: Merry Christmas from the Santa Porg! #LEGO #StarWars #AdventCalendar